Swanning Around in Zurich

On a short visit to Zürich*, I had the chance to check out Alexei Ratmansky’s 2016 staging of Swan Lake, danced by Zurich Ballet. There were swans everywhere in Zurich this week: on the lake (flocks of them), in the parks, and padding nonchalantly across the pleasant footpaths with cygnets in tow.

The pretty neoclassical opera house, which seats about 1,000 – small stage, huge orchestra pit – was packed, as all opera houses are, perennially, for Swan Lake. This is the third season the company has presented this particular production, and it appears to be as popular as ever. I wonder if the audiences here realises how unique it is. This not your run-of-the-mill Swan Lake, choreographed “after Petipa,” with various additions and subtractions, but rather a reconstruction of the 1895 Petipa/Ivanov staging, to the degree that such a thing is possible, based on period notations and other archival sources. Ratmansky, who staged it on the company, has recently taken an interest in this sort of ballet archeology; just a couple of weeks ago, American Ballet Theatre unveiled his latest project in this vein, Harlequinade. Swan Lake was the third of his reconstructions, after a 2015 Sleeping Beauty and 2014 Paquita.

In fact, it is a striking departure from what one sees in productions around the world. Some moments come as a complete surprise, like the involvement of Prince Siegfried’s best pal Benno in the famous pas de deux (here, a pas de trois) by the lakeside. The idea here is that Benno is and isn’t there. Odette, the Swan Queen-turned-maiden, steadies herself by holding his arm, for example, as she peers at Siegfried from a safe distance. Or balances on his leg as he kneels, only to be lifted away and cradled in Siegfried’s arms.

Another striking detail that stays with you: a strange but beautiful pose at the end of what is usually referred to as the Black Swan pas de deux. The prince gets down on one knee and Odile – the Swan Queen’s rival, performed by the same dancer – leans forward in arabesque; first she is supported by his outstretched arms, but then she lets go and steadies herself by pressing her hands against his knee. The image is one of total domination. He is the vanquished, adoring supplicant, she the self-sufficient seducer. There’s no question who’s in charge.

But, at least to my eye, the production’s triumph is its final lakeside act. There, the formations of swans, as originally choreographed by Lev Ivanov, become intricate, delicate, lyrical, and intensely moving. Ratmansky includes both black and white swans (as in the original). The moment in which the dancers wearing long, black tutus weave their way down a long line of dancers in white, fits trippingly into a descending figure in the music. It sets your heart aflutter in a way I’ve never felt in Swan Lake before. That particular moment in the score, a waltz, is entitled “Un Poco di Chopin”. The melody, an orchestration of a Tchaikovsky piano piece, was added by the composer Riccardo Drigo in the 1895 version of the ballet, after Tchaikovsky’s death. (There had been an earlier, unsuccessful version, in 1877.) It is one of the most infectious musical passages in the ballet. Later, the swans advance toward the audience in long horizontal lines, walking – almost prancing – on pointe, arm in arm, sisters-at-arms. Their final formation is complex, three-dimensional, gorgeous.

Unlike more recent Swan Lakes, the final lakeside scene also includes quite a bit of mime, most significantly, a series of gestures in which Odette insistently declares: “I will die here!” It is repeated at least six times. Again and again, she is held back from leaping into the waves, at first by her fellow swan maidens, who trap her or pull at her arms, keeping her prisoner. Later it is Siegried who desperately tries to drag her away. The desperate conversation between Odette and her unfaithful lover here adds a more human, less epic, dimension to the story. Death isn’t Odette’s destiny, but the choice of a desperate woman. This is echoed in physical terms: drooping, vine-like arms, elongated, exposed neck, supple, soft torso. She is a picture of sadness.

The cast on June 15 was led by a guest artist, Martina Arduino, a principal at the La Scala Ballet, who also performed this version in 2016 in Milan. (The production premiered in both houses.) She was partnered here by Kevin Pouzou, a Zurich soloist who was débuting in the role of Siefried. Benno was Wei Chen, also a soloist. Arduino is a beauty, with a strong, round, Leonardo-Da-Vinci face and large eyes, and bold, bravura technique. She seemed comfortable in the style demanded here by Ratmansky, which shies away from high extensions of the leg and big jumps and instead emphasizes the pliancy of the upper body. It’s hard to exaggerate how deeply Odette is asked to bend, both to the side, and forward. Arduino’s balances and turns were also strong. My only complaint was some over-emphatic dancing (and choppiness) in the third act ballroom scene.

Pouzou seemed nervous and stiff; his mime, especially in the first act, was rather generic. No doubt he’ll grow into the role, but it’s clear he could use more coaching to make the mime flow more like conversation. He’s handsome and precise but as yet lacks authority. Wei Chen danced elegant and cleanly as Benno; he might make an appealing Siegfried.

Jerôme Kaplan’s medieval-ish designs are mostly very attractive, though I found the dresses for the character roles, including the Queen, overly plain, and not terribly flattering. The Queen looked more like a 1920’s Art Deco hostess than like a medieval monarch. Tempi were generally brisk, and dynamics sometimes over-loud (conducted by Pavel Baleff).

The ambiance was far less epic and grandiose than what one usually sees in Swan Lake. It was almost a new ballet – clean, crisp, as legible as a recently-restored painting. But the style requires constant attention; already the first and third acts feel less fresh than the lakeside scenes. The temperature rose significantly with the arrival of Arduino. Her dancing was grand in scale; the Zurich dancers, perhaps because of the size of their theater, are more contained. A little boldness, even in this more intimate retelling of Swan Lake, wouldn’t hurt.

* This was not so coincidental; the trip was part of my research for a project devoted to the choreography of Alexei Ratmansky. 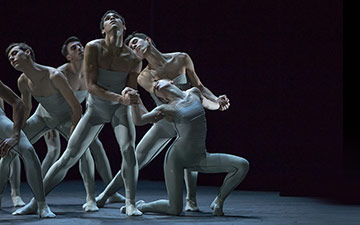