Among the many casts of Mayerling that the Royal Ballet has fielded this year and last, the pairing of Federico Bonelli and Laura Morera rarely gets reviewed and has never been filmed. They conclude the October run, and I was fortunate to see them on Thursday 25th.

Bonelli’s Rudolf starts out as an entitled aristocrat, resenting his arranged marriage to a Belgian princess. He’s not (yet) mad, bad and dangerous to know; not, like some interpreters of the role, psychotic from the start. He is attractive enough to bewitch Louise, Princess Stephanie’s sister (Isabella Gasparini) in their protocol-offending duet in the Act I ballroom scene. He’s not a nasty drunk in the Act II brothel, and he has the devoted loyalty of his cab driver, Bratfisch (Tristan Dyer).

He is driven mad by the way he is treated. His parents despise him – even his antique grandmother, Archduchess Sophie (Ursula Hageli) disapproves of him; he is pestered by Hungarian separatists, who are flashier dancers than he is; he is constantly under surveillance by the court, government and Nicholas Georgiadis’s set. Everyone wants something from him, including his aristocratic mistress, Marie Larisch (Hikaru Kobayashi, Bonelli’s wife).

Bonelli struggled through Rudolf’s opening solo in the ballroom, as have many Rudolfs. It was created on Anthony Dowell, who suffered an injury and was replaced by David Wall. Like Des Grieux’s first solo in Manon, made on Dowell, it’s a daunting challenge for any dancer. However, since Rudolf has so far to go in the three-act ballet, it really doesn’t matter how perfectly he executes the solo: it doesn’t tell us who he is going to be.

Bonelli reveals the prince’s craving for unconditional love when he confronts his mother, Empress Elisabeth (Itziar Mendizabal) in the ‘closet scene’ before his wedding night. He’s a lost soul, too needy for her unmaternal nature. She has to deal with an arranged marriage and so should he. Mendizabal is highly strung, protecting herself, not him. Alone with his dutiful bride (Emma Maguire), Bonelli abuses her for not being able to provide the comfort he needs. He is cruel but not a rapist (he’s a reliable partner), almost too strung out to consummate their marriage.

His low-life mistress, Mitzi Caspar (Beatriz Stix-Brunell) seems an uncomplicated relief from the stuffiness of court life. Bonelli’s Rudolf enjoys himself, competing heroically with the Hungarian officers, led by Cesar Corrales. Corrales was so impetuous that he mis-landed, but carried on undeterred. Stix-Brunell’s Mitzi is lusciously provocative, a naughty and untrustworthy informer.

Laura Morera is a consummate dance-actress as Mary Vetsera. She starts as the Austrian equivalent of Colette’s Gigi, a naive but enthusiastic courtesan-in-training. Larisch is her mentor (and pimp). They have danced the same steps together, to the same tune, ever since Mary was a girl in a party frock at Rudolf’s wedding. Morera shows how subtly she approaches the simple steps once Mary is ready for Rudolf; she’s mirroring sophisticated Larisch, hinting at the voluptuary she’s going to be.

Morera doesn’t interpret the role so much as inhabit it, phrasing the choreography with the music so that every movement is meaningful. Each unfolding of a leg or flutter of fingers tells us what she is thinking and feeling. Her performance is a revelation, very different from Natalia Osipova’s hoydenish approach to Vetsera’s personality.

Morera’s Mary has many facets, fulfilling Rudolf’s need for unconditional surrender.  She’s even maternal, cradling his aching head rather than consuming him erotically. She abandons herself completely for him – a fatal decision. It’s telling that when her body is exposed after Rudolf crashes down with the screen, she lies sprawled, one leg dangling. Her life has been wasted, like his. Other Marys are posed, a laid-out corpse with a flower on her breast.

The partnership in Mayerling between Morera and Bonelli is a fine example of how experience can illumine the nuances of a dramatic ballet. The characters of Rudolf and Mary Vetsera reveal themselves further in every scene instead of hurtling towards the climactic ending. MacMillan’s choreography becomes the inevitable expression of what they are going through, arousing horrified sympathy for their desperation. A very fine, very human portrayal of a royal tragedy. 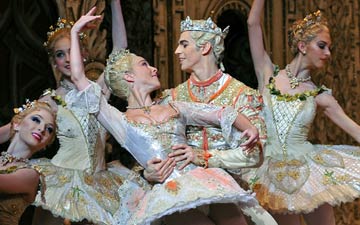 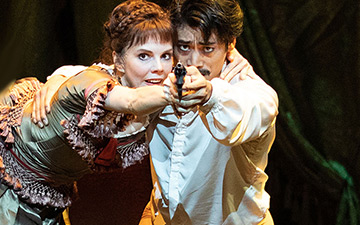