A daunting opening night of the season for Ryoichi Hirano, making his debut as Crown Prince Rudolf in Kenneth MacMillan’s Mayerling. Not only was he replacing Edward Watson, the Royal Ballet’s finest, maddest Rudolf, but he had to partner five experienced principal dancers who needed to adapt their interpretations to suit him.

Some Rudolfs are so charismatic that it’s obvious why women are dangerously attracted to him.  Hirano, though, is an ill-at-ease misfit from the start – a perplexing void to be manipulated or rejected.  This unhappy prince doesn’t know who he is: tall and handsome, he can appear threatening even when he’s terrified. His mother (Kristen McNally as Empress Elisabeth) is repelled by him, however guilty she feels at her lack of love. He overpowers his bride (Francesca Hayward as Princess Stephanie) because she is at his mercy. This small Stephanie fights back, refusing to submit. Hirano manages to show that he is appalled at himself even as he brutalises her.

He is at the mercy of his established mistress at court, Marie Larisch (Sarah Lamb). Their first pas de deux reveals how well-tuned together their bodies are, as she expresses her regret that she might lose him, and her power over him. Lamb is excellently complex as Larisch, a conniver with a conflicted heart.  She is the only one who understands Rudolf, and she ends up as the agent of his destruction. Lamb’s dancing is both brittle and sensual, her Larisch a practised seductress whose eyes follow him all the time.

Hirano is able to unwind in the tavern scene at the start of Act II, as drunken Rudolf cavorts with his low-life mistress, Mitzi Caspar, and the four Hungarian officers who constantly plague him. (No amount of mime and bits of paper can explain that they are campaigning for a separate Hungarian state.) The brothel bustles with energy, the whores whole-hearted, their clients hurling themselves around and across the dancing floor. Marianela Nunez’s Mitzi is the ultimate good-time girl, in her element in the company of lustful men.

The choreography expresses her ebullient personality, fitting her like a courtesan’s glove. Mitzi accepts Rudolf as a sozzled aristocrat escaping the rigours of the court. She has no time for his creepy obsession with guns; she’s a survivor, a paid informer. The Prime Minister (Alastair Marriott) pats her bustle as they leave the raided brothel together – probably among the least inappropriate actions in this highly sexed ballet.

It’s not until the middle of Act II that Mary Vetsera emerges to lay claim to become yet another of Rudolf’s mistresses. Up until now, she’s had a minor role as a star-struck girl with a pushy mother. Then Larisch arrives for a charming domestic scene to groom her for a major prospective role. Natalia Osipova isn’t entirely convincing as a naive youngster copying the way her sophisticated mentor comports herself. Their shared steps don’t suit her, though she’s an avid learner.

She is duly delivered to Rudolf’s chambers, primed to play her part. He is vulnerable, shattered by his royal family’s hypocrisy and scorned by his pregnant wife. Hirano is convincingly out of his depth, unaware of what is about to engulf him. Osipova’s Vetsera is a Lamia, a snake enchantress who coils herself around him, arousing him and herself into sex-induced intoxication. He’s hooked and she’s high on her power over him.

Larisch may not know what she’s set in train. She shows compassion for Rudolf’s spiral of despair until she is insulted by McNally’s Elisabeth, incandescent with rage at Larisch’s presence in his room. Larisch unleashes Vetsera as Rudolf’s nemesis. Tension mounts unbearably as the two meet in the hunting lodge at Mayerling, both dressed in similar colours as they urge each other on in a dare of self-obliteration. Osipova is lethally orgasmic, flying on Hirano’s shoulders like a winged devil, seizing his gun as her ultimate trophy. Never has MacMilllan’s choreography for the death duet seemed so astounding as in her account of it.

The Royal Ballet knows how to perform Mayerling, with no fewer than five casts this run, even without Watson as Rudolf. All the interpretations and the balance between the roles are slightly different.  Hirano’s debut placed the emphasis more on the scheming women than on Rudolf’s agonies: he has yet to make his solo ‘monologues’ reveal his inner state because he’s still mastering the contorted choreography.

Alexander Campbell makes rather too much of his secondary role as the cab driver, Bratfisch. He’s licensed to entertain, not scene-steal; by the final scene, neither the doomed couple nor the audience are interested in his performance. Gary Avis makes his presence felt as the Empress’s lover, Bay Middleton, while knowing he is dispensable. Cesar Corrales, now with the Royal since leaving English National Ballet, is conspicuous as a Hungarian officer. Praise must go to the ladies-in-waiting and the maids of the imperial household for dancing their choreography so delightfully. And praise for Koen Kessels and the Royal Ballet Sinfonia for turning Liszt’s assortment of music, arranged and orchestrated by John Lanchbery, into an emotional roller-coaster of a narrative ballet score. 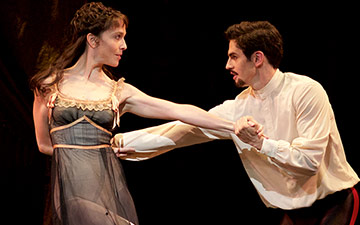 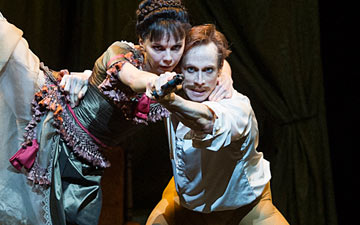