A quote from The Observer’s dance critic, Nigel Gosling, in 1964: ‘Merce Cunningham and his company have burst on the British scene like a bomb . . .heart-warming proof that here is an art with a future, opening up ranges of possibilities which stretch out of sight: it ought to be celebrated with champagne in every dancing academy in the land.’

Not every dancegoer responded so enthusiastically at first sight to the Cunningham experience, though in the 55 years since that initial bombshell, his work has indeed been celebrated in the United Kingdom. The company performed 165 times in London and toured widely elsewhere before its closure in 2011. Cunningham’s rarely seen Roaratorio was done in the Royal Albert Hall and the Barbican Theatre, as well as in Belfast’s Waterfront Hall. His dancers memorably appeared for a week in 2003 in Tate Modern’s Turbine Hall under Olafur Eliasson’s artificial sun.

There they performed Cunningham’s Events, a collage of excerpts from works old and new, arranged in a different order every time. Events could be given in any kind of venue, the choreography stripped of its original context and costumes, its ‘musical’ accompaniment unrelated. Night of 100 Solos was an exceptional Event in commemoration of what would have been Cunningham’s 100th birthday, 10 years after his death. Performances took place in London, New York and Los Angeles, live-streamed around the world. All three versions will be available for three months as videos on the mercecunningham.org site.

The London Event was master minded by Daniel Squire, with the assistance of former members of the Merce Cunningham Dance Company. The 25 dancers were drawn from the Royal Ballet, Scottish Ballet, Rambert, Michael Clark Company, Richard Alston Dance Company and the Ballet de Lorraine. Others were freelance artists, choreographers and directors. The Cunningham Trust aims to demonstrate that a diverse group of dancers can continue to perform Merce’s choreography, passed on by those who worked with him during his long career.

Some of the dancers were obviously more familiar with Cunningham technique than others. Rambert has performed 10 of his works, so Thomasin Gulgeç and Luke Ahmet, for example, were at ease with the off-centre balances and speedy jumps from nowhere. I had seen the Centre Chorégraphique National – Ballet de Lorraine dance Cunningham’s Rainforest, so recognised the luscious power of Inès Depauw in a solo from that work. Tall Harry Alexander (Michael Clark and Julie Cunningham companies) was easily recognisable as an outsize grasshopper in green, and then in pink, jogging on the spot while rearranging bits of clothing. Most of the performers had three or four solos each, some with changes of outfit.

The ballet-trained dancers were conspicuous because of their arched feet and high extensions, although ballet placement doesn’t provide the superb control Cunningham required for different sections of the body. The Royal Ballet’s Joseph Sissons and Francesca Hayward were very aware when they were distorting their classical lines; Beatriz Stix-Brunell was less uptight, more fluid. Sissons exploded into action like a firecracker or curved for ages in a crouch on tiptoe; Hayward was chosen for solos requiring articulate feet and deep pliés, prancing under an umbrella. She was haunting as a visitation from another sphere of dance, a marked contrast from the athletic heft of Daphne Fernberger or Asha Thomas, both from American companies

The dances who caught my attention were clear and decisive, presenting themselves in sculptural 3D rather than facing front. I enjoyed the anarchic ones – Mbulelo Ndabeni with his topknot, and Luke Ahmet, both in flaming red, and Jonathan Goddard in yellow, yelling at the top of his voice. He reappeared in a Merce solo from Antic Meet, wearing dungarees, a tie and white shoes. It was a vaudeville number, as unexpected as the appearances of Michael Nunn and William Trevitt, in blue, drooping their wrists as paws and lying down together like tired animals. Trevitt had earlier disrupted proceedings by crashing about with tin cans attached to his legs, a contribution from Robert Rauschenberg when he was the Cunningham company’s designer.

Siobhan Davies was meanwhile holding onto a chair back, in a pondering solo that evoked Merce himself as he grew older. In her several appearances, she seemed to be channelling his way of feeling rather doing the dance, a lean figure with white hair and flickering hands, a quiet but major presence. John Cage, Cunningham’s partner and long-term colleague, was honoured in a tableau where members of the cast stood still for what might have been 4’33. Instead of Cage’s silence, however, the soundscore kept going, performed live by Mira Benjamin, John Lely, Anton Lukoszevies, Christian Marclay and Christian Wolff. Only mildly irritating, it combined instrumental plinks and plonks with electronic static.

The background projections consisted of sketchy designs by the late Richard Hamilton, including shadows cast by Marcel Duchamp’s readymades, in a set used for the Cunningham Company’s Barbican Events in 2005. It didn’t distract attention from the dancers. Every soloist had their own vitality, rhythm and personality, whether alone or sharing the stage. What was missing, inevitably, was any partnering or intended encounters during the 90 minutes (or so). Cunningham’s skill as the overseer of his Events lay in contrasting the combinations of dancers in pairs, trios and larger groupings, however random his decisions were supposed to be.

I had hoped for two or more dancers to perform the same solo, maybe in opposite directions, so that we could focus more intently. (Nunn and Trevitt were the only doubled-up pair that I could spot.) Instead, the evening became a medley of fleeting individual contributions, rather than an anthology of Cunningham’s work. The Los Angeles performance ended with the cast dancing in unison, which seems a satisfying conclusion. The London version assembled all 25 together as silhouettes against a celebratory golden glow, an evocation of Cunningham’s glorious Pictures.

The three Nights of a 100 Solos will never be seen live again. As Cunningham accepted, dance is ephemeral. The centennial celebrations will continue, however, in various centres, with many dancers (including Royal Ballet ones) due to appear in the Paris Festival d’Automne commemorating Cunningham from September to December this year. 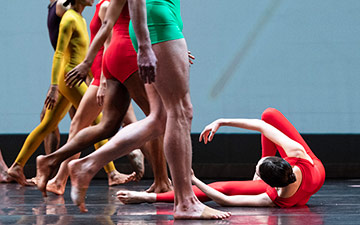 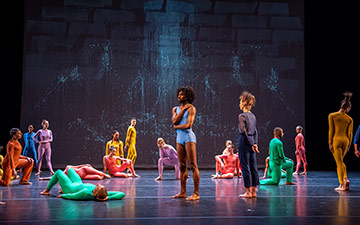 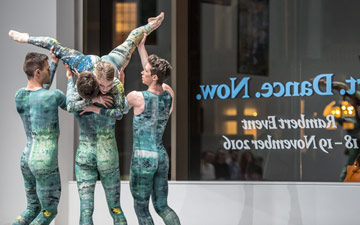