Natalia Osipova, like Sylvie Guillem before her, poses a challenge for a choreographer: how to deal with such exceptional talent without wasting or abusing it? Sidi Larbi Cherkaoui, wanting to create a vehicle for Osipova in his first commission for the Royal Ballet, chose the myth of Medusa. Unfortunately, the version he adapted from Ovid’s Metamorphoses involves Medusa’s rape by the sea god Poseidon. How to make her violation acceptable in this day and age without adding to the Royal Ballet’s repertoire of abused women?

Cherkaoui’s solution is the centrepiece of the company’s latest triple bill, flanked by two contrasting revivals: Christopher Wheeldon’s balletic Within the Golden Hour and Crystal Pite’s contemporary dance Flight Pattern. Cherkaoui’s choreography for Medusa is a combination of dance styles, with the women on pointe and the men rolling and tumbling across the floor. He is an eclectic creator, collaborating with performers from many different art forms and cultures – among them, Akram Khan and Beyonce. He has been artistic director of the Royal Ballet of Flanders since 2015, as well as running his own company, Eastman, and being an associate artist with Sadler’s Wells Theatre.

He may be spreading himself too thin, for what happens on stage in Medusa bears little relation to his synopsis, or interviews he has given, including a long one with Judith Mackrell in the Royal Ballet programme. The premiere seemed a sketch yet to be developed, given impetus by the magnetic presence of Osipova in the title role. Medusa, a temple maiden rather like a bayadère, is desired for her beauty. Raped by Poseidon, she is punished for no longer being a virgin by the goddess Athena. She is turned into a Gorgon with snakes for hair, so hideous that she turns men into stone.

She and five other maidens aren’t that chaste, for they dance with male admirers, under the watchful eye of Athena (Olivia Cowley). Medusa favours Perseus (Matthew Ball), to whom she presents a white scarf as a good luck token. Jealous Poseidon (Ryoichi Hirano in an asymmetric kilt and black stripe) takes possession of her in a series of lifts. Distressed, she continues to perform arabesques, as ballerinas do in 19th century ballets while being abducted by villains. Poseidon, supine, balances her on his feet, which requires her co-operation. After swirling her fiercely about, he leaves her on the ground, as Athena emerges to admonish her.

The rape encounter takes place to a Purcell aria from The Fairy Queen. Another aria (from The Indian Queen) accompanies the collusion of the temple maidens in placing a snake-haired wig on her head. The lyrics are inaudible, sung from the orchestra pit by soprano Ailish Tynan and later by counter-tenor Tim Mead. Interspersed with an electronic score by Olga Wojciechowska, the baroque music serves to distance the events, a reminder of their mythic status.

Cherkaoui apparently wants us to understand that Medusa’s unjust punishment is in fact her empowerment by feminist Athena. Now that Medusa is a monster, she can get her revenge by killing the men who didn’t save her from Poseidon and who are potential rapists anyway. What we see is Osipova, dressed like a scarlet poppy, luring soldiers in organza fatigues into dancing with her. They are anonymous, faces hidden by mesh fencing masks with plumes to resemble antique helmets. Ball, as Perseus, removes his so that he can partner her. Maybe she recognises him, even before he produces the scarf she gave him.

Medusa does not appear to turn anyone to stone with her basilisk glare. The craven soldiers enable her to rear her legs like striking serpents before her victims crawl away. A dominatrix, she kicks Perseus repeatedly with venomous point shoes. He seems to face her with impunity, eventually gaining ascendency over her. Does he recognise her? We know nothing about him to account for his victory in decapitating her. In print, Cherkaoui explains that she lets herself be defeated because she’s avenged herself enough and doesn’t want to be a monster forever more. The only way she can take control of her life is by electing to die, setting her soul free. (In the synopsis, the winged horse Pegasus springs from her neck – really?)

Liberated from her headdress and back in her silver dress, Osipova rules the temple in a spectacular solo to a lament from Purcell’s The Fairy Queen. She entwines her arms, curves her torso lavishly and arches her legs behind her in renversées, releasing them into flying leaps. It’s the only interesting piece of choreography in an otherwise uninspired production. Just what Medusa is expressing is impossible to tell without a close reading of the programme notes. So muddled is the story telling that she appears to revert to a compliant temple priestess at the end, in spite of her horrifying metamorphosis. Cherkaoui can’t show that she has transcended the punishment the gods inflicted on her – or what happens to her gorgon head in the myth.

Although the set, jointly credited to Cherkaoui and the ROH production team, looks impressive, Olivia Pomp’s costumes (and the snake wig with its chin strap) are misbegotten. Wheeldon’s Within the Golden Hour has been redesigned by Jasper Conran, providing a shimmering start to the triple bill. The 14 dancers resemble ephemerae – delicate insects skimming across water. The paillettes on their diaphonous costumes reflect Peter Mumford’s lighting suggesting the colours of a sunset sky, blue, crimson, golden. Ezzio Bosso’s music for strings pulses and scintillates, giving way towards the conclusion to the andante from Vivaldi’s Violin Concerto.

The ballet, created in 2008 for San Francisco Ballet, is a joyous jeu d’esprit in response to changing moods in the music. Wheeldon plays with ways of dancing together in contrasting duets, including one for two men (Nicol Edmonds and Tomas Mock) in counterpoint, brief, fast and competitive. Vadim Muntagirov and Beatriz Stix-Brunell face each other in snatches of social dances – waltz, tango and Charleston. Ryoichi Hirano stays behind Lauren Cuthbertson as she curves away from him, till he reins her in by gripping her extended foot.  Sarah Lamb initially stays behind Alexander Campbell, curling over his back until she seems to float in his arms, dissolving in and out of fantastic shapes.

Wheeldon brings the couples together for the finale, merging them into a tick-tocking ensemble with the eight supporting dancers. He’s created a celebration for happy young people at the end of a golden day, using the intricate skills of the ballet tradition in which they’ve grown up. They are still dancing as the curtain closes.

Crystal Pite’s Flight Pattern turns a corps of 36 dancers into a huddled mass of refugees, repeating a pattern of migration across the ages. Flocking together, elbows raised as they sweep across the stage, they resemble birds as well as desperate survivors. Do they survive, though? Pite leaves the ending ambiguous. She uses the first movement of Gorecki’s soulful Symphony no.3 to underline the suffering of displaced persons in their state of limbo, en route to an uncertain future. One couple, Kristen McNally and Marcelino Sambé, have already lost a baby. McNally mourns to the lament of Mary on the death of her son (sung by soprano Francesca Chiejina).

The grieving mother has to bear the weight of all the community’s losses, symbolised by the coats piled on her arms. Sambé reacts in rage, hurling himself in a solo of frenzied leaps. The black walls of the set have opened to let in the line of refugees, closing to exclude the couple, she rocking in anguish till he puts his hand on her shoulder. Snow is continuing to fall behind the wall and the refugees no longer have their coats. Have they reached the other side – death or asylum?  In interviews, Pite has said that the ending is uplifting, ‘part of a bigger picture’: the white confetti could be stars or fireflies or the Elysian Fields. If she says so. The ending is unresolved, so take comfort, if you can. 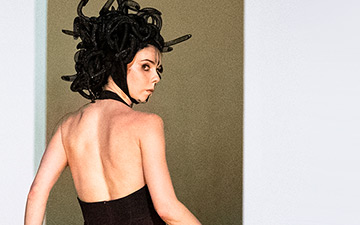 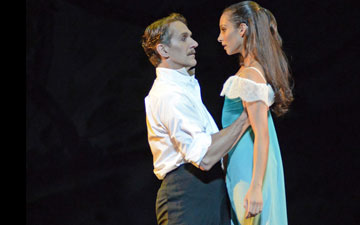 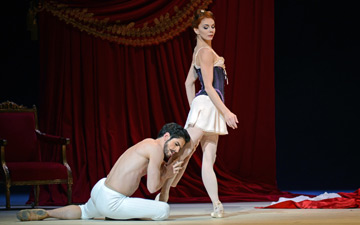