At 7:35 pm on Friday night at the Met Opera House, a casting change came through the PA: James Whiteside would replace Daniil Simkin as Ali, the slave. Balletgoers started clapping and whooping, and with good reason: days after the performance, I cannot get Whiteside’s Ali out of my head.

Ali is crucial to Corsaire, not just to the plot but as the poster boy for the entire ballet. Until Nureyev and Fonteyn blazed across the Covent Garden stage in 1962, many westerners were unaware the ballet – an entertaining if choppy 19th century confection ‘based’ on Lord Byron’s pirate poem using multiple composers and choreographers to – existed. The bare-chested Nureyev immortalized Ali (a televised recording didn’t hurt) and cast the dye for how the role would be performed and choreographed for multiple generations: an exhibition of breathtaking male virility and grace. What height, what zest, what sensuality, what abandon. What once (pleasantly) shocked prim, mid-century audiences is now expected of any modern Ali.

The greatest Ali’s I have seen live were Farukh Ruzimatov and Angel Corella. Mr. Whiteside joins their ranks as an astonishing Ali.

Whiteside is exceedingly versatile: a consummate prince, a shifty villain, and in Corsaire, an elegant, lithe, discreet Ali. From his entrance in the first act, Whiteside was in the background facilitating the action. As a thespian, he was present with a capital T: monitoring all the stage action, fully embodying his role as servant to his pirate boss, Cory Stearns’ Conrad.

ABT’s grotto ‘pas de deux’ is a pas de trois, with Medora dancing with both Conrad and Ali, but the pyrotechnic spirit (for both male and female dancers) of the mid-century Soviet rendition remains the same. Whiteside achieves astonishing height, and his semi-circular backbends are smooth as silk. The infinite after image is one of his body spiraling vertically, back slightly arched and a foot in coupe back, like an animated strand of DNA.

Whiteside wasn’t the only notable performance. Zimmi Coker was a standout Odalisque: highly musical, winning and technically perfect. An ingenue with a talent for petite allegro, this corps member could have the makings to be an excellent Giselle. Joo Won Ahn as Lankendem has gliding, elegant balancés, a pillowy grand plie to make you cry, and pirouettes ad infinitum – he could stop on a dime (lucky audiences will see him as Ali in an alternate cast). Luis Ribagorda threw himself into the role of the two-faced Birbanto, giving us a punchy, hyper-macho exhibition of lunges, combat and brio. The Pasha’s assistant, Patrick Frenette was as deliciously camp as his boss, performed by Alexei Agoudine.

Devon Teuscher’s Medora is charming and warm, pulling off triple fouettées turns and her Italian fouettées with aplomb. Cory Stearns seemed undercaffinated in Act I but soon perked up. Charles Barker’s conducting was enthusiastic but seemed slow enough at times to make the dancers look sluggish. Stearns’ boy-next-door-turned-tough-guy serves him well as Conrad, who has to muscle his way through dangerous situations. As Gulnare, Katherine Williams was light as a feather, all of her jumps completely silent.

Le Corsaire is entertaining if problematic and deeply un-politically correct. The plot involves the buying of female slave dancers, racial stereotypes, the subjugation of women, slavery and piracy. For the first time to my knowledge, ABT included a disclaimer in its Playbill notes:

‘Many great classics depict the disturbing social norms of bygone eras. In our Corsaire ABT has chosen to adjust certain scenes in tone and character out of respect for those whose lives and status were marginalized. There may still be images that some find offensive, but we hope our audience members will be transported to the period in which it is set, and realize that such scenes are a reflection, not a validation, of life in those times.’

The real, original Corsaire remains a mystery. ABT’s is a staging by Anna-Marie Holmes, after Petipa and Konstantin Sergeyev. Petipa supposedly adapted it from an older production by Joseph Mazilier. The ‘traditional’ score is an amalgam of composers, including Adam, Pugni, Delibes, Drigo, and Oldenbourg. The Bolshoi may have the closest thing to Petipa, after a collaboration by Ratmansky and Yuri Burlaka (although they both added their own choreography to it) using Petipa’s notes. ABT’s current production could use some updates, particularly the fluorescent tutus in the Pasha’s dream sequence, the top layer of which looks like a flimsy synthetic fabric. The production stays busy, if some of the larger corps divertissements could also use some updates. But I’m still thrilled by such great performances from ABT. 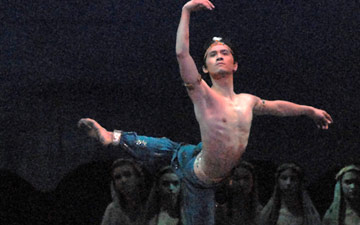 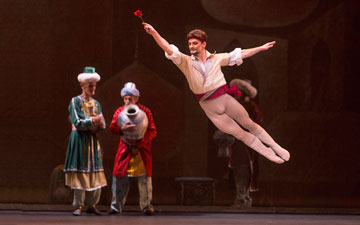