When Makhar Vaziev became the Bolshoi Ballet’s director in 2016 he offered Alena Kovaleva*, a teenage graduate of St. Petersburg’s Vaganova Academy, a contract in the Bolshoi’s corps de ballet.

Within three weeks she was rehearsing one of the most beautiful pas de deux in the company’s repertoire as one of the leading couples in Diamonds, the third piece in Balanchine’s triptych, Jewels.

A year later she danced the role in the 50th anniversary production of Jewels at New York’s Lincoln Center.

The critics raved, describing her as “a magical new creature” who, at the curtain call, had “a wild and heartfelt ovation”.

In Brisbane we were expecting Olga Smirnova would perform the role on the opening night of Jewels at the Queensland Performing Arts Centre in Brisbane where the Bolshoi is in residence for 11 days.

Instead, Kovaleva, the now 20-year-old Bolshoi first soloist, stepped onto the stage with Jacopo Tissi, another very talented young dancer who joined the Bolshoi two years ago.

Their ‘love me, love me not’ pas de deux was both thrilling and memorable and seemed to acknowledge Vaziev’s focus on younger dancers.

Smirnova, whose partner, Semyon Chudin, could not come to Australia, was partnered by Artemy Belyakov on the following day.

Watching Smirnova’s perfection, her long lines, beautiful port de bras and exactitude in Diamonds was one of those magical moments in the theatre.

As you would expect Diamonds was the highlight of the three part Jewels.

The choreography, danced to Tchaikovsky’s Symphony No.3 in D major, represents the classical ballets Balanchine knew as a young man in St. Petersburg but also relates to his Tchaikovsky ballets, among them Theme and Variations.

Both Theme and Variations and Diamonds end with an uplifting polonaise that brings the audience to their feet for numerous curtain calls.

With its ruby red sparkling panels and skater-like dresses for the women, Rubies was an audience pleaser, but the Bolshoi dancers don’t have that “all that jazz” of the Americans, with the exception of the leading couples, Ekaterina Krysanova and Artem Ovcharenko on opening night and Margarita Shrayner and David Motta Soares the following day.

Emeralds, Rubies and Diamonds all share a thread of walking and sometimes skipping with Emeralds more airborne and Rubies more grounded. Diamonds is lit from within by the simple design of the dark blue sky scattered with stars and the elegant tutus with their transparent bodice top, the most charming costume in Jewels by the designer Elena Zaytseva.

One of the heroes of the season was the Bolshoi’s conductor, Pavel Sorokin, who is conducting the Queensland Symphony Orchestra for every performance from 26 June to 7 July. 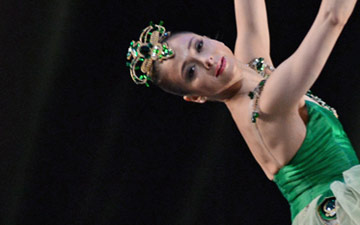