Fascinating to see the Royal Ballet’s production of Balanchine’s Jewels not long after the Bolshoi’s account at the Royal Opera House in summer. Unlike the Russians, the Royal Ballet dancers understand the different period conventions of the three ‘acts’: French Romantic Emeralds, American jazzy Rubies and Imperial Petipa Diamonds. Well-coached, the men bring out the contrasting etiquettes of partnering their ideal woman across the ages: an escort’s skill is based on being always available.

In all three ballets, the man walks out with the woman is he wooing. He runs around her, promenades her gallantly, supports her, entwines with her. Courtly manners displayed in Emeralds and Diamonds become more of a tussle in Rubies, but he’s never going to let her down, however much she provokes him. The focus, as always with Balanchine, is on the women, glorified in solos as well as pas de deux – but it’s instructive to watch the men.

There are two couples in Emeralds: on opening night, Roberta Marquez and Edward Watson, Laura Morera and Ryoichi Hirano. Watson’s role was first performed in 1967 by Conrad Ludlow, an expert, I was told, in the kind of shuffle around a partner perfected by Fred Astaire. Male dancers nowadays prefer to point their feet as they walk and swoop into deep lunges (which Watson does elegantly). Marquez, as Watson’s ballerina, relies on him prettily to catch and lever her into position in their pas de deux, in which the partnering is often back to back. Marquez is whimsical, self-absorbed, playing with tendril arms in her solo to a babbling stream of notes.

Morera phrases her solo beautifully, musing until she’s caught up again by Fauré’s music. Her torso is always spiralling, shoulders in opposition to her hips – even her pirouettes are accomplished with a backbend. In the ‘walking’ pas de deux with Hirano, she drifts on pointe in a private idyll as he glides around her, both uniting in synch for the tick-tock movements that mark the music’s pulse.

Emeralds has false upbeat finale, with a melancholy coda added in 1976, nine years after the premiere. The female corps depart, leaving four soloists behind to console three yearning men. Alexander Campbell, the bouncing boy from the trio (with Elizabeth Harrod and Akane Takada), seems to be pleading with the remaining women not to go. They vanish, of course, as sylphs do at dawn.

Rubies is a wake-up call to Stravinsky’s Capriccio. The chorines are vamps from vaudeville, with Zenaida Yanowsky the most outrageous showgirl of all. Four men try to grapple with her but she’s unstoppable, gamely undeterred by a tumble near the start of the ballet. Mr B liked his dancers to take risks, as the central couple do – Sarah Lamb and Steven McRae in well-matched rivalry. She’s the naughty up-town girl, classy but a bit too brittle to be sexy; he’s the street-smart show-off who can jump higher and spin faster than anyone else. He has to do the jazzy partnering shuffle backwards, as well as taking charge of her high-kicking dives into his arms. They make an exhilarating pair, complemented by the snappy corps.

Diamonds gets off to a feeble start, to Tchaikovsky’s over-insistent waltz performed by skeins of dancers we don’t care about (apart from Yuhui Choe and Hikaru Kobayashi as a sparkling duo). They’re filling in time until the grand, very grand, pas de deux. When the Bolshoi’s rising star Olga Smirnova danced the ballerina role, with Semyon Chudin as her partner, she evoked Nikya and Odette, desirable but unobtainable. Marianela Nunez is Aurora, a real princess who is going to marry her prince after a properly formal courtship. Their pas de deux is a negotiation of terms, territory and emotions with a predestined outcome, happy-ever-after. The walking theme of the two previous ballets is ever-present, though it develops into an embrace. Thiago Soares partners Nunez intimately, reliably: when she falls back into his arms, she knows he’s there (unlike the surprise effect in Rubies). When he kisses her hand at the end of the pas de deux, it’s a moral and erotic commitment as well as an adoration.

Nunez is so vividly present and fearless in technique that she doesn’t need his support (unlike the Emeralds ballerinas with their partners), though she loves his presence. At the end of his demanding solo, Soares grinned in pleasure when his multiple pirouettes succeeded: Nunez could take hers for granted, like her assured balances in arabesque. Aurora’s wedding is duly celebrated in the sweeping polonaise, involving most of the Royal Ballet company, that concludes the evening in a finale of pomp and triumph. More and more men surge out of the wings to escort the glittering women: no-one is left alone.

A New Year’s wish for the Royal Ballet’s Jewels: ditch Karinska’s costumes – especially the lumpen jerkins for the men – and provide a sumptuous décor that doesn’t depend on poorly simulated velvet drapes as backdrops. 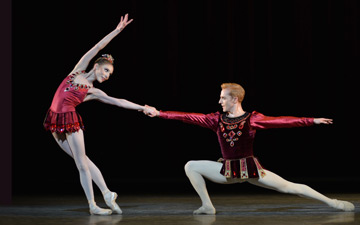 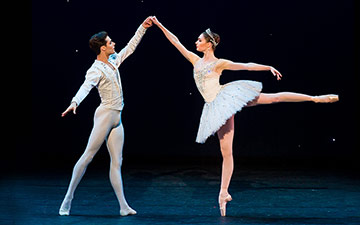