The bad news is that the San Francisco dance community is losing outstanding dancers and choreographers, who are relocating to Los Angeles or the East Coast to escape the impossibly high cost of living here. The really good news is that our deep, broad and multifaceted talent pool is not only withstanding the losses but expanding into the gaps and growing beyond them.

One of the driving forces in the scene is the indie contemporary company FACT/SF, founded by choreographer Charles Slender-White 12 years ago. Along with presenting his own innovative work, he’s instigated commissioning programs and showcases for other avant-garde artists, the most recent being the Summer Dance Festival.

The second annual SDF opened Thursday, August 15, on the final night of a grotesque weeklong heat wave, and the mutual misery of artists and audience in the sweltering black box at Joe Goode Annex made the event something of a purification ritual. SF choreographers Maurya Kerr, Dazaun Soleyn and Slender-White, and the visiting duo of Joy Davis (Boston) and Eric Mullis (Charlotte, North Carolina), presented new works of 10–20 minutes in length. Their conceptual legibility was a matter of each viewer’s perceptions, but the bodily execution of each work was masterful and marvelous across the board.

Davis and Mullis’ opened with Halidom, inspired by their Butoh studies in Japan and set to sampled sounds by Mullis. Synchronous one-armed figure eights gave way to two-arm motions and then to full-bodied propulsion with transfixing specificity – Butoh on fast-forward. Split into momentous trajectories, they were drawn back together by the fearsome energy of Davis’ gaze – one suspects there is rarely a moment, in dance or in life, when she is unsure of her destination.

Claire Fisher performed a message of truths, a solo created on her by Soleyn, a promising dance maker who is still sorting out the tools in his box. Symbolism that seemed personally resonant to Soleyn and Fisher – she tossed autumn leaves and washed herself in a puddle of glass beads – was at once obvious and inscrutable in performance, and complicated by a score that shifted from spoken word to John Coltrane to Pharoah Sanders to Ólafur Arnalds. Nevertheless, watching Fisher was a pleasure: She danced most of the piece wearing a knitted ski mask, unable to rely on facial expressions; she radiated intention through the delicate gestures of her fingers, the rise and fall of her plié, and weighted slides down the wall onto the floor.

Alex Carrington orbited Chelsea Reichert in Kerr’s my beloved comet, a slightly overlong series of vignettes about an imagined cosmos with a sound score of rumbles, purrs and distortions by Ben Juodvalkis. They danced on an unfamiliar gravitational plane conjured through super-slow motion, extended pauses in balance and surreal hyperextensions, a gorgeous illusion that belies the immense skill required to create it. In one chapter Carrington stood on relevé with fists held high, facing off against Reichert, who crouched mid-plié with her arms splayed backward; in another, their side-by-side quarter turns to different facings evoked a disassociated waltz; yet another had them running, tripping and whirling, pedestrian movements they made otherworldly.

FACT/SF closed with BackstitchBack, a brief quintet set to “Knee Play 5” from Philip Glass’ Einstein on the Beach. Over the last dozen years, Slender-White has explored open, sweeping motion as much as mind-bogglingly minute gestures; here he synthesized them in a beautifully composed work with a fugue-like structure. He interwove Keanu Brady, Michaela Cruze, Catherine Newman, LizAnne Roman Roberts and Amanda Whitehead like the pendants of an Alexander Calder mobile, finding visual and energetic balance in asymmetrical twos, threes and solos. Sweeping arms opposed deliberate gestures, the ensemble’s loose pas de bourrées framed Cruze’s double promenade in a tilted a la seconde, the swirl of a skirt carried momentum past the boundaries of a body. BackstitchBack ended with the dancers prone on the floor, contorted in a twist – way too soon. 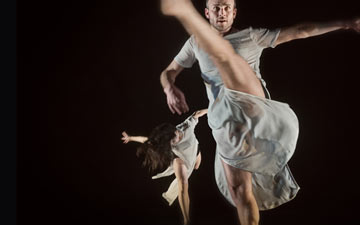