Listening to Mozart allows one to marvel in abundant aural delights: long scalic passages that ascend heavenward; bouncy, patterned bass lines; bold dynamic range; melodic themes that inspire and surprise. Now imagine what it would be like to simultaneously add a visual dimension?

No need to imagine such a scenario if you made it to Cal Performances over the weekend to see Mark Morris Dance Group in the delightfully spirited Mozart Dances. Choreographed by Founder/Artistic Director Mark Morris in 2006, Mozart Dances delivers on many fronts. It is, most definitely, a sensory banquet – a full evening dive (audibly and visually) into a famed composer’s work. With a three-part structure, it also cleverly mirrors Sonata form, a compositional recipe consisting of an exposition, development and recapitulation, popularized during Mozart’s era. And Mozart Dances also goes far beyond a basic choreographic rendering of the score, instead inviting an active dialogue between disciplines. Yes, there are several instances where the movements and musical phrases are in harmony, each embodying the other. But equal attention is paid to moments of contrast, where the two exist in delicious dissonance. The result is a deep conversation, replete with ample layers and textures. I adored the piece when I saw it twelve years ago, so I was thrilled to learn that it would be returning to Zellerbach Hall. Friday night’s performance, where MMDG was joined by the Berkeley Symphony, conducted by Colin Fowler, more than lived up to my memory.

Part one, subtitled Eleven and set to Piano Concerto No. 11 in F Major, took on the exposition function, introducing the main choreographic themes that would recur over Mozart Dances’ three chapters. In the first few minutes, the company worked together on this lofty enterprise. Though, soon the men disappeared, leaving Eleven and the establishment of Mozart Dances’ motifs to the women, led by Lauren Grant. Save a few balance, timing and spatial challenges, they were up to the task. Suspension abounded as did grand pliés in second position; running circuits paired with staccato notes; determined walking countered ornate trills; while pulsing relevés, pronounced elbows and angular arms punctuated the score. The quest for resolution was another powerful thread. As the cast traversed the stage with explorative hand gestures and inquisitive gazes, musical appoggiaturas similarly searched for their resolution. And throughout this and Mozart Dances’ subsequent sections, unassuming design elements (giant mascara-wand swooshes coupled with warm, subtle lighting and elegant costuming) kept the focus rightly on the dialogue between the dance and sound.

Double, Mozart Dances’ second chapter, belonged to the men of the company (though as in Eleven, the women did make a brief appearance). Costumed in a steel-gray morning coat, Aaron Loux championed this development segment of the work, where initial themes were investigated, deconstructed, inverted, distilled, slowed down or sped up. While Inon Barnatan and Fowler brilliantly interpreted Mozart’s Sonata in D Major for two pianos from the orchestra pit, familiar visuals compellingly peppered the stage. The angles and relevés were indeed recognizable, though there was also that air of distinction that a development always brings. Suave, frozen poses infused a courtly, Baroque flavor, isolated motions felt keenly robotic and the prevalence of intricate circular patterns added a note of community kinship.

Lastly, Mozart Dances concluded with a full company statement, Twenty-Seven, titled, as were the other parts, to reflect the chosen musical selection (Piano Concerto No. 27 in B-flat Major). This recapitulation-style episode revisited and restated many of the work’s primary themes, alongside a good dose of newness. Diagonal jumping phrases were jubilant and celebratory. Little hops in arabesque slyly followed the quiet, creeping bass line. But Twenty-Seven’s real triumph was its rhythmical nuance, particularly the interplay of three against four. While the orchestra (majestically) played in four-beat measures, the cast sidled back and forth in triplet-metered footwork. Sometimes that kind of unevenness isn’t successful; it can even be a bit jarring. But this is Mark Morris, a master when it comes to marrying physicality and music. Instead, the trope revealed how different base meters can co-exist and maintain their integrity without one becoming dominant. Yet another fascinating point of exchange between the music and the movement. Twenty-Seven’s only downfall was that it was too long. Or more accurately, it stayed too long in the same dynamics, tone and quality. Though I didn’t keep an exact log, it seemed like most, if not each, of Mozart Dances’ sixteen performers had an opportunity to solo during this finale. While I appreciate and applaud that democratic egalitarianism, the solos were all pretty similar, again making Twenty-Seven feel lengthy. 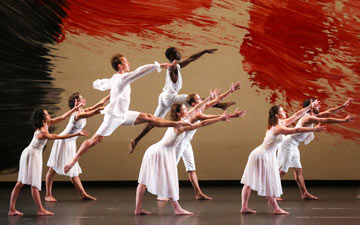 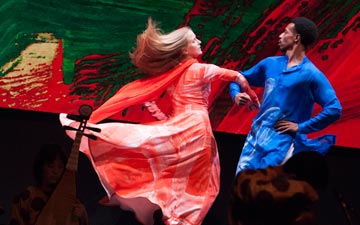