This programme of three London premieres by UK-based choreographers provides a mixed bill with a broad, sweeping momentum to showcase both the company’s inherent sense of theatre and the crisp, fresh attack of its dancers who perform with vitality and vivacity. The works offer strong contrasts between the traditional story-telling strength of Northern Ballet and more abstract thematic dance.

Frank Moon’s sound design for The Kingdom of Back (★★★) begins with a voiceover and the unforgettable opening line of “I am writing to you with an erection on my head…”, accompanying a solo by Antoinette Brooks-Daw wearing an enormous Georgian powdered wig. The line comes from a letter from Maria Anna Mozart (nicknamed Nannerl) to her younger brother, Wolfgang Amadeus, which continues “…and I am very much afraid of burning my hair”.

Morgann Runacre-Temple has applied her innovative, inquiring choreographic voice to an interpretation of Nannerl’s unfulfilled talent, squandered by patriarchal command. Nannerl was herself a child prodigy, touring and performing with her brother as the “wunderkinder”, although she could only do so as a child; once she turned 18, such public performance became unseemly and Nannerl could only watch as her younger brother ascended to the musical stratosphere. She is known to have composed music that her brother declared to be beautiful and yet nothing has survived (unless it has been wrongly attributed to him).

Runacre-Temple dealt with this mix of patriarchy, sibling rivalry and respect with choreography that was full of quirky humour and challenging technique. The contrast was absolute between the white-costumed, blonde-haired effervescence of Brooks-Daw’s Nannerl and the dark, forbidding formality of her father, Leopold, portrayed with imperious, vampiric solemnity by Javier Torres. The constraints on Nannerl’s artistic freedom were represented by confining her within the boundaries of an oblong box, which she often came to within millimetres of escaping; and her father’s ceremonial removal of her wig was a striking symbol of ending her artistic aspiration.

Although the central sections were busy and full of too many ideas to grasp in one go, this work plays to Northern Ballet’s theatrical strength and one which will reward many repeat viewings.

South African dancer, Milindi Kulashe, was prominent amongst the performers of that first work (possibly as Mozart) and it was his choreography that provided the centrepiece of the programme with Mamela… (★★★). It is good to see David Nixon bringing the creative talents of his dancers to the fore and Kulashe has rewarded his director’s faith with a strong piece about the loneliness of an individual trapped within a cluttered and uncaring society. Well, that is how it seemed to me since “Mamela” means “listen” in Xhosa – Kulashe’s first language – and he appears to offer his choreography up for any interpretation that his audience cares to give to it.

In the concluding section, Sean Bates gave a powerful exhibition of an emotional breakdown, his long limbs put to meaningful effect in twisted, stretching movements, which I found to be an affecting portrait of an individual’s mental health implosion. The work’s abstract meandering lost my concentration a little in the central section but overall it was strong stuff, well articulated in both choreography and performance.

Kenneth Tindall is now a choreographer of note who began his pathway in a similar way to Kulashe – nurtured from within Northern Ballet where he is now both artistic director of digital and choreographer in residence. His The Shape of Sound (★★★★) closed the programme with style. Tindall has an uncanny knack of mixing classical dance into a commercial offering that is powerful theatre and his latest one-act ballet has all that in abundance with striking costumes by Kimie Nakano and stunning lighting designs by Alastair West and Tindall himself. Their lighting had a solid, architectural quality that made it a seamless extension of the set and enabled several memorable transitions, including a coup de theatre towards the end that caused the audience to gasp and/or laugh out loud.

This mature work set to Max Richter’s neoclassical recomposing of Vivaldi’s The Four Seasons is both joyous and intimate. Tindall has a strong sense of creating fascinating patterns for his group choreography (there are fourteen dancers in this piece) mixed with sensitively configured duets (often danced simultaneously). He is a choreographer with an unerring eye for creating memorable imagery and one who is honouring Northern Ballet’s fiftieth anniversary, which occurs on 28th November, by enhancing the company’s mission to create contemporary ballet as theatre that is accessible to a modern audience. 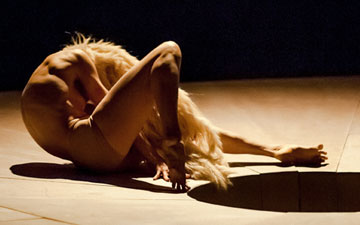