8th March at Sadler’s Wells was the last time we were able to see Richard Alston’s work performed by his own company of dancers. He reckons there have been 90 or so members over the 25 years of RADC’s existence, and 45 of them were in the audience on the final night. Alston will carry on creating elsewhere but the ecology of contemporary dance in this country has lost an important component: lyrical, light-footed, sophisticated dance to a wide range of music.

While RADC’s videos and archives are to go to the Victoria & Albert Museum’s dance collection, since September last year the company has been touring mini-retrospectives of his works, giving some of them a last outing in live performance. A season at The Place, Alston’s home theatre, in September 2019 spanned fifty years of dance making in one programme. His career has evidently proved too long for the Arts Council, which prefers to prioritise up-and-coming choreographers. Alston has had to bow out.

Knowing that his company must close this March, Alston created two valedictory pieces for the last spring tour: Shine On and Voices and Light Footsteps. He reused the latter title, originally given to a Ballet Rambert piece by him in 1984, for an entirely new work, once again to music by Monteverdi. It closed the Sadler’s Wells Final Edition on an upbeat note, ending with a merry madrigal Alston had loved since he was a small boy.

Voices and Light Footsteps (a quotation from Henry James’s description of the Piazza San Marco in Venice after sundown) involved the company of nine, the women in gold and amber slips, the men in sunset pink tunics and cream trousers. Ensembles followed the timbre of the music, the men dancing to tenor voices and the female soloist, Monique Jonas, to a madrigal for a soprano, ‘Such sweet torment’. Jonas was a powerful presence, luxuriating in the mournful cadences of her dance to the woman’s lament.

In the loving duet that followed, for Elly Braund and Nicholas Shikkis (on Sunday evening), I was puzzled by Braund’s sudden flight at the end. The understanding between the two seemed one of mutual trust – not one to be broken by an argument. Only later did I realise that the music was from Monteverdi’s opera Orfeo and that Braund must have been Euridice. The tender duet for Jennifer Hayes and Jason Tucker that followed was also from Orfeo, this time without the tragic conclusion.

After a jaunty ballo for seven dancers came the loveliest duet of all, for tall Joshua Harriette and tiny Ellen Yilma. She twined round him like a vine, and was lifted above him as exultantly as the tenor’s voice. Other couples joined in until everyone was present, acknowledging each other courteously in a spirited folk dance to Damigella Tutti Bella (Beautiful Maiden). The dancers had become a community of friends enjoying the sunset hour.

The other work new to London, Shine On, had its premiere in November 2019 at Snape Maltings in Aldeburgh, home of Benjamin Britten. His setting of five poems by W.H. Auden inspired Alston’s defiant farewell piece to music by one of his favourite composers. Britten’s On This Island isn’t exactly a song cycle, since there is no connecting thread between the poems. Sung by Katherine McIndoe, a soprano who has studied Britten’s song repertoire during a stay in Aldeburgh, the words were unfortunately largely inaudible. They matter because Alston has responded to them, as well as to Britten’s early piano settings, played by Jason Ridgeway. Ridgeway has been the company’s pianist and onstage performer since 2000, a vital collaborator in Alston’s creative process.

Shine On takes its title from the opening poem, ‘Let the florid music praise…let the hot sun shine on’. The music’s fanfare and the ebullient dancing at first resembled Mark Morris’s L’Allegro, il Penseroso ed il Moderato to Handel’s setting of Milton’s poems. Then the tone changed to a duet of regret or remonstrance. The next duet, for Ellen Yilma and Jennifer Hayes, also darkened after a swirling, skidding start to a premonition of death, as the swiftly falling leaves of the song lay motionless on the ground.

Later, a duet for two men, Niall Egan and Joshua Harriette, to Britten’s beautiful Nocturne was full of intimations of loss and rejection. Auden wrote of ragged vagrants, awkward lovers, seeking hiding places to sleep, curled up together. Starting arm in arm, the men grew apprehensive, trying to find consolation in each other as the soprano sang inexplicably about a traction engine and ‘revolting succubus’. (Thank you, Google, for the lyrics.)

Auden’s poems are clotted with imagery that Britten turned into soundscapes – or a seascape, in the case of ‘Look, stranger, on this island now.’ Music and dance surged restlessly, but it was impossible to tell whether the dancers were celebrating, despairing or just ebbing and flowing like waves. The link, or absence of links, between the poems and the choreography was frustrating since there’s no chance of seeing Shine On again to make more sense of it.

What did Alston intend the fifth song to convey? The poem that starts ‘As it is, plenty’ tells of the complacency of a seemingly prosperous bourgeois man and his family. He has yet to discover that he will lose everything and that the loss will be major and final. Was Alston thinking of himself? Or the loss of his company to ‘this island now’? The choreography to Britten’s pastiche of pre-war dance music simply read as a happy family frolic, led by Shikkis and Yilma.

The piece ended with a reprise of ‘Let the florid music praise’, with its assurance that the sun will shine on, in spite of everything. I suspect it’s a very personal account of Alston’s experience of loss and betrayal, filtered through Britten’s and Auden’s subversive song cycle. I wish I understood it better.

The programme had opened with Bari, danced as it had been for The Place farewell in September, by graduate members of London Contemporary Dance School, where Alston had started his career. Although the music, a remix of tarantella folk dances, is buoyant, the young performers were saying farewell to a guiding spirit of The Place.

Their curtain raiser was followed by Alston’s Isthmus, which has undergone many changes since its creation at The Place in 2012 to celebrate Bob Lockyer’s birthday. In its last version at Sadler’s Wells, it took the form of two trios: two women and a man; two men and a woman, all in costumes with a bar of colour down the front. In action to Jo Kondo’s quirkily percussive chiming, they resembled a scrambled game of pick-up sticks, frequently disrupted by Nahum McLean as spirit of misrule. Alston didn’t follow the fiendishly fast music; instead he came up with movement motifs to mark its progress, as the dancers splintered into different configurations.

After a pause for Ridgway’s piano to be brought on, Harriette and Shikkis danced Alston’s 2015 Mazur, to seven of Chopin’s mazurkas. Now the dancers and pianist acknowledged each other, agreeing on the phrasing with its syncopated rhythms and pauses for breath. Yes, it’s another piano ballet, like Jerome Robbins’s Dances at a Gathering in rep. at the Royal Opera House, but here the dancers were barefoot. Alston could set Mazur on ballet dancers in future because its choreography is close to balletic versions of Polish mazurkas.

For his own company, Alston didn’t make use of turned out feet, which meant his dancers could not move swiftly sideways. Instead, they covered the ground forwards, keeping their torsos in contrapposto to their legs and feet. Impressively, they performed multiple spins on bare soles. Hand on heart, they took it in turns to perform conversational solos before coming together in intimate duets, friends sharing memories.

The farewell programme included Martin Lawrance’s final contribution, A Far Cry. Alston’s long-term associate choreographer, Lawrence challenges RADC’s dancers with vigorous, urgent choreography that, like Alston’s, often uses odd numbers rather symmetrical pairings. Here, Harriette was the wild card, dashing in and out rather than combining with the others. While Lawrance’s choice of Elgar’s virtuoso music for strings, Introduction and Allegro, might have seemed a feisty response to the company’s imminent dissolution, the recording he used was so over-amplified by Sadler’s Wells’ appalling sound system that A Far Cry was almost unwatchable.

Sir Richard Alston came on stage at the end to join the dancers who had just performed his Voices and Light Footsteps for the last time. No presentation of bouquets or hail of flowers as at the Royal Opera House, but plenty of tears on and off stage. He thanked dancers, audiences and presenters over the years and ended with a Shakespeare quote: ‘All’s well that ends well.’ The Tempest might have been more apposite, for he resembled Prospero in The Tempest, bidding farewell to his spirits and contemplating an unfamiliar future. This is no ending, for a new era of his career surely opens before him. 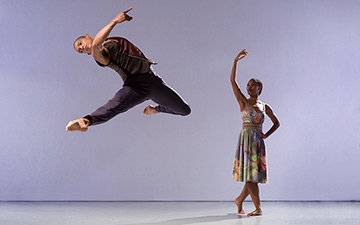