This week, New York City Ballet’s Balanchine/Stravinsky mini-festival entered its second phase, with a Russian-themed program. The first piece of the evening was Scherzo à la Russe, a four-minute charmer made for the 1972 Stravinsky Festival, performed here by students from the School of American Ballet. The jaunty music was originally intended for a Hollywood film set in Russia—the project came to nothing—but could just as easily have been lifted from Petrushka. It is an ideal piece for young dancers, with its high spirits, abbreviated nursemaid costumes (adorned with pink or sky-blue ribbons) and folk-accented jumps and kicks. Most of all, it is good to see these students—a corps of sixteen and two soloists—looking so crisp and well-rehearsed, and moving with such joy. Olivia Boisson and Claire Von Enck, both of whom stood out at SAB’s spring performances of Cortège Hongrois, were the soloists. They continue to blossom.

The highlight of the program was the seldom-performed Divertimento from “Le Baiser de la Fée”. It is a deceptively shadowy work, a fairy tale in the guise of a conventional divertissement. The music is very much in the style of Tchaikovsky, a by-product of Stravinsky’s experience orchestrating two pieces from Sleeping Beauty. The composer and musicologist, Claudio Spies, has written that it contains “some of the best music Tchaikovsky never composed.” Stravinsky wrote the full version of the score, along with a libretto, in 1928. The ballet, based on the Hans Christian Andersen story, The Ice Maiden, was produced by Ida Rubinstein’s company in Paris. Bronislava Nijinska was the choreographer. Subsequently, Balanchine used it (in 1937) to make his own story ballet, with fairies and villagers and a bride and groom. It has a typical fairy-tale plot, with an ambivalent ending: a fairy kisses a baby, who grows up into a strapping young man and falls in love with a girl. But then, when the young man is about to marry this girl, the fairy comes back, kisses him again, and leads him away to live with her wherever it is that fairies live, for all eternity. The end. It’s a cross between Sleeping Beauty and La Sylphide. No-one dies, but no-one lives happily ever after either.

In 1972, again for the Stravinsky Festival, Balanchine did away with the story and turned the ballet into a divertissement. It starts out simply enough, with an ensemble of women in short skirts with colored bodices—sort of peasant-light apparel—doing basic Balanchinean filler steps. (Lots of piqués and pas de chats. Let’s just say it’s not one of his most inspired passages of ensemble choreography.)  Then comes a gentle pas de deux, again fairly conventional, notable mainly for its tenderness. The ballerina’s choreography is faintly doll-like (the role was made for Patricia McBride), which makes it perfectly suited for Megan Fairchild, who danced the role on September 22, with Joaquín de Luz. (Débuting in Divertimento later in the week, Tiler Peck gave it a more swooning, womanly air.) But as the male solo begins, things darken. The music becomes sinuous and insistent. The male dancer turns this way and that, his tendus becoming jumps, constantly changing direction. He looks lost. His jumps grow in height and urgency, as if he were trying to catch something that eludes his grasp. Each time, he lands on one knee, sweeping one arm forward, then runs and jumps again. As the solo ends, he is still running. De Luz danced with great panache, playing ever so slightly with the tempi—faster, slower, faster, slower—to heighten the drama. In the other cast (Sept. 27) Gonzalo García danced with less clarity, but with a lushness and urgency that made the solo even more unsettling.

The ballet gets stranger yet. Order seems to prevail when the ballerina enters and performs a playful, frisky solo, followed by an upbeat finale. But it’s a false ending. The ensemble pulls the lovers apart; once again they are lost in the wilderness. Briefly, they find each other; she runs and he catches her, holding her torso as she arches back in his arms, her legs still advancing, almost against her will. When they kneel on the ground in a final embrace, the women of the corps step between them, one by one. By the end, they are alone, at opposite ends of the stage, wandering backward into the wings, backs arched, arms extended. Even though Balanchine eliminated the story, the themes of the fairy-tale remain; magic forces, longing, fear, separation. It is a surprisingly bitter ending for a ballet that at first seems so anodyne. Both casts of soloists performed eloquently; Tiler Peck was especially adept at switching the texture of her dancing from the cheerful sweetness of the pas de deux to the ghostly tones of the ending. The ensemble, however, looked ragged and under-rehearsed.

Next came Danses Concertantes, revived a few seasons ago. It’s a clever, jaunty concoction, fizzy and light. Amongst other things, the jewel-toned costumes, by Eugene Berman, are lovely, with skirts that appear to be made out of flower petals. The company dances it wittily, reveling in its syncopated rhythms and flirty hip bumps. With its jazz-age sophistication, it’s like a lighter, less vulgar Rubies. Chagall’s designs for Firebird, which closed the program, are simply magnificent, glowing with lush, saturated colors. Tall, serene Teresa Reichlen, in her red feathered tutu, is less fiery than unknowable. If she melts in the prince’s arms in the opening pas de deux, it is with the knowledge that she will soon break free from his embrace. But Reichlen truly comes into her own in the berceuse, her regal bearing belying a deep sadness that emanates from her shoulders and back as she slowly glides across the stage. As she preens, caressing the feathers on her head, breast, and tutu, it is clear that her exquisite beauty is little consolation for her loneliness. She is the only creature that will not be invited to the wedding. Balanchine’s Firebird is a universe away from Alexei Ratmansky’s new version for ABT. It is elegiac, plaintive, deeply Russian, while Ratmansky’s is post-apocalyptic, eccentric, even campy, and influenced by pop culture. In many ways I prefer Balanchine’s vision; like Fokine’s, it feels one with the music. And yet, as I watched I was struck by how certain passages in the music now reminded me of moments from Ratmansky’s ballet. Ivan’s playful dance with the princess, or Kastchei’s demonic, tittering walk and twiddling fingers. Just as Balanchine remade Divertimento from ‘Baiser de la Fée, Ratmansky has taken the story apart and put it back together again. 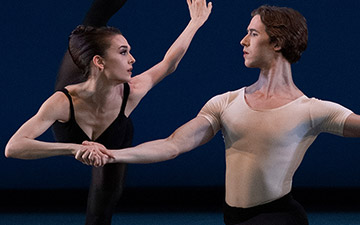 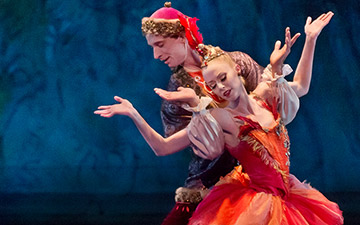