New York City Ballet is off to a fine start when it opens the winter season with a very well-danced all Balanchine, all Stravinsky program. This year it began with lots of color and a semi-novelty, Danses Concertantes. First, Artistic Director Jonathan Stafford introduced Baily Jones, who is the 2019-20 Janice Levin Dancer, an annual honor for a member of the corps. Jones, who spoke briefly, was in her bright green costume for Danses Concertantes, letting us know that while DC may not have Balanchine’s most immortal choreography, it won’t be, like the succeeding pieces, in bare black and white.

In fact, Danses Concertantes even has an opening curtain, an old fashioned one announcing the dance and its makers, and scenery, too, gray grisaille side pieces and a dark blue backdrop, all by Eugene Berman, who also designed the attractive, witty costumes. Berman made these designs for Balanchine’s 1944 original choreography for the Ballet Russe de Monte-Carlo. Balanchine re-choreographed the ballet for New York City Ballet’s 1972 Stravinsky Festival and brought back Berman’s designs, too.

Dances Concertantes was revived ten years ago but has been little seen since. Stravinsky’s 1941 score is in his neo-classical vein. So is Balanchine’s choreography, but he added lots of his more modernist stylings, so along with classicism, gargouillades and lots of nifty jumps, there are his typical jazzy touches – prances, juts of hip, shifts side to side.

It starts with the ensemble, led by a principal couple in bright yellow, Erica Pereira and Harrison Ball, both suitably perky, as they lead a group of twelve in quick Balanchine patterns. Pereira’s yellow bodice has a black sunburst. She and the eight other women wear short, frothy tutus. There are four trios of two women and one man, each in a vivid color. And each trio in turn, the greens, the blues, the purple and violets, the reds, does an enjoyable variation, followed by a return of all the dancers, colorful, but abbreviated.

Monumentum pro Gesualdo from 1960 and Movements for Piano and Orchestra from 1963 are both short and since 1966 always paired together. In honoring the adventurous (and scandalous – suspected of murder) Renaissance composer Gesualdo, Stravinsky made music that hints of earlier times and Balanchine produced an elegant ballet that has witty surprises.

Both Momentum and Movements are typically led by a tall ballerina, here by Teresa Reichlen, in splendid form, ably partnered by Ask la Cour. Reichlen is elegant, indeed, but sometimes swoons or uses her body more loosely here, though always with great aplomb and control. There are six couples in Momentum and in a wonderful moment at the end, Balanchine has everyone splitting to the floor in a tight intersecting pattern.

Stravinsky used serialism for Movements and Balanchine matched this with his most modernist style. Reichlen and la Cour are joined by six women, and the choreography is again filled with delightful surprises, my favorite being when Reichlen, who can be so formidably sharp and angled, kind of melts over herself, her limbs and whole body succumbing to liquidity.

Stravinsky Violin Concerto is a great ballet, matching Stravinsky’s verve and wit with Balanchine’s. We see it often, and it’s always welcome, particularly when danced as well as it was on January 21. In the Toccata, the four principals in turn lead groups of four men or four women (there are eight of each) in sharp, speedy diagonals, that Balanchine imaginatively varies. It’s a terrific way – and an unusual one – to start a ballet.

Lauren Lovette, paired with the excellent Joseph Gordon, has developed an intriguing insouciance as she leads her forces. Sara Mearns always has a unique approach to Balanchine modernism and tonight she added a very strategic nonchalance.

Both Lovette and Gordon in the more soulful duet and Mearns and the also excellent Adrian Danchig-Waring danced their duets very well indeed. Mearns conquered a succession of backbends adroitly and she and Danchig-Waring matched wits and wit splendidly with that of Balanchine and of Stravinsky. The corps, so good in Toccata, was equally vibrant in the final Capriccio.

It was cold outside, but inside the former New York State Theater, it was a warm and welcoming opening evening of Balanchine and Stravinsky and New York City Ballet dancers. 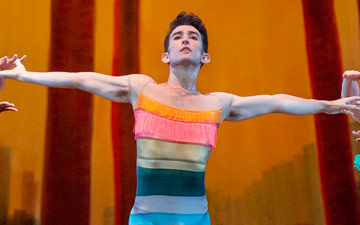