The “updating” of highly codified, traditional dance forms is a tricky matter. So often it becomes synonymous with a watering down or an artificial melding of styles. At the same time, classical forms have to evolve to stay alive. One can’t live on Swan Lake alone. In a few weeks, the Royal Cambodian Ballet will perform a program of classical dance at the Brooklyn Academy of Music, but even this company, devoted to reconstructing and conserving the the Khmer classical school (dating back as far as the ninth century) is not immune to innovation. Much of the repertory was lost during the period of the Khmer Rouge and had to be painstakingly reconstructed by the few interpreters who had survived. The new ballets reflect the choices and styles of those teachers, as well as the changed cultural reality of Cambodia. The original context in which the Khmer dances were performed – sacred ceremonies held at temples and royal palaces – are relics of a lost world. Now these dances are mainly performed at official events, on tour, or for tourists. By necessity, the format has changed. Even the “Apsara Dance,” a lilting, synchronized ensemble piece often included in performances – its closest western equivalent is the “white act” in nineteenth century ballet – is a relatively new addition. It was choreographed for Princess Norodom Buppha Devi, a reknowned performer, by her grandmother Queen Sisowath Kossomak in the nineteen sixties. Authenticity is a slippery concept, especially in dance.

But once in a while, a real modernizer comes along and shakes things up more radically. In the realm of Cambodian dance, it is Sophiline Cheam Shapiro, a former dancer who began her studies in Phnom Penh as a teenager, after the fall of the Khmer Rouge. Under Pol Pot’s rule, she lost several members of her family to starvation and illness. After taking part in the revival of Cambodian dance in the eighties, she came to the United States (she is married to an American) and began creating her own dances. More recently, she has founded a company, Khmer Arts Ensemble, based outside of Phnom Penh. In past works she has combined the vocabulary of classical Cambodian dance – the bent-back fingers, lilting walk, one-legged poses and hyper-extended arms – to stories like The Magic Flute and music by Western composers, including the New York experimentalist, John Zorn. These were curious experiments, but not, from what I’ve seen, fully satisfying. The elements did not quite fuse together. With A Bend in the River, her newest creation, recently performed at the Joyce Theater (as part of the “Season of Cambodia” festival), she has come up with a hybrid form that needs no justification. It feels organic and whole.

A Bend in the River is innovative on many levels, but, like all successful advancements, feels both true to its sources and utterly unique. Rather than basing the work on a story from the Reamker (the Khmer version of the Ramayana) from which all traditional classical plots are drawn, she took inspiration from a Khmer folk tale, adapted for the stage by her husband, John Eli Shapiro. It is the story of a girl whose entire family is devoured by a crocodile, and whose spirit is reborn in the form of a magic crocodile, strong enough to kill its enemy. Essentially, it is an allegory for Cambodia’s history. How does a nation pick up the pieces after a traumatic event like the killing fields? Is revenge an option? At what price?

The story is told in several ways: there is a narrator, who sits with the traditional pin peat ensemble at the rear of the stage on a raised platform. She recites each episode in a spare narration, in English. (Unfortunately, she was a bit difficult to hear over the playing of the orchestra). Then there is the orchestra itself, with its exotic (to us) mix of gongs, oboes, xylophones and drums. The musical score, by Him Sophy, is truly extraordinary. According to the program it is the “first new music for the pin peat ensemble in modern history.” I don’t know Cambodian music very well at all, but from what little I’ve heard, Sophy has extended its range of colors, dynamics, and rhythmic contrasts significantly. The oboe’s lament after the death of the crocodile is heart-rending, as is a strange child-like sob intoned by the Cambodian vocalist toward the end of the piece. Vivid changes in rhythm and tempo drive the story, building excitement, punctuated by moments of meditative beauty. As in Prokofiev’s Peter and the Wolf, the instruments become characters in their own right. And yet the music does not feel in any way banalized or smoothed-out; the harmonies and texture of the music are still quite foreign to our ears. (I do wonder what a Cambodian listener would think.) Then there are the puppets, gorgeous rattan crocodiles whose separate segments are manipulated by the dancers, jaws chomping, tail swishing. (The crocodiles, and a beautiful glistening crocodile egg, were designed by the Cambodian artist Sopheap Pich.) At times the dancers step inside the puppets, or twirl them, or lay them on the ground in piles, where they take on the aspect of a three-dimensional Guernica.

And finally, there is the dancing itself. Using the traditional vocabulary, modified with certain atypical movments – pivoting heads, sharp dynamic changes, even some undulations of the pelvis – Cheam Shapiro has created a lively story in movment, veined with passages of great poetry. The choreography is dramatic, dynamic and varied; ensembles alternate with solos, conversational passages with moments of almost pure abstraction. The costumes, by San Vannary, are elegant and simple, allowing more freedom of movement than the sumptuous traditional garments, which are sewn onto the dancers’ bodies (not to speak of the spire-like crowns and masks). In the final image, the dancers’ arms become the flames of a funeral pyre; in another scene they are the river’s current, or floating lily pads. In addition to the ensembles and solos, there is a delicate pas de deux in which two women (all the characters are played by women) interlock hands, push against each other gently, and finally come together in a composite figure, one leaning over the other in a bent-legged pose, fingers splayed and delicately touching.

All this added up to an evening of enthralling theatre. The pieces cohere, with each element (puppetry, music, chanting, dance) complementing the whole. It’s clear that Sophiline Cheam Shapiro is onto something, and I’m eager to see what she comes up with next. 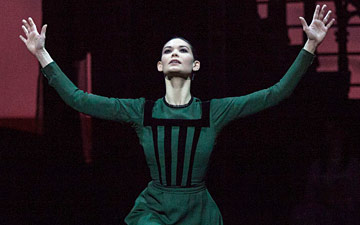