Jookin’ at the Poisson Rouge

The best performers transcend genre. You don’t need to be a ballet fanatic to understand, in an instant, what’s great about Baryshnikov or Natalia Osipova. They touch us with their dynamism and physical abilities – how do they do that? – but also with their one-of-a-kindness. They are irreplaceable. The mix that goes into the cocktail is different in each case: with Baryshnikov, it’s that razor-sharp intelligence; with Osipova, an irrepressible vitality that makes her appear twice as alive as anyone else onstage. With others it’s sensitivity or ardor or musicality or wit. (Think of Yo Yo Ma or Gustavo Dudamel.) But the experience of watching them is the same: you feel utterly in the moment. Lil Buck, a young dancer who specializes in a form of hip-hop developed in Memphis known as Jookin’, is that kind of dancer. When he begins to move, you are not just impressed by what he’s doing – which is impressive enough – but also touched by the quiet joy and purity of expression that emanates from his body and eyes. He lights up as soon as the music begins, whether it’s Galician folk or jazz or Young Jai’s “Gangsta Walk”. He’s ready to play.

Last night Lil Buck performed a short program of dances at Le Poisson Rouge (about an hour long), organized and produced by the former New York City Ballet star, Damian Woetzel. Woetzel has been a kind of mentor to Lil Buck since seeing a video of the young man on YouTube. The curly-haired former virtuoso – now the director of the Vail International Dance Festival and an active impresario – invited Buck to take part in an outreach program at a school, attended also by Yo Yo Ma (Woetzel has friends in high places). Apparently the two felt an immediate connection. Ma played The Dying Swan and Buck improvised. Their version of that old ballet chestnut has become a phenomenon; they’ve performed it in Vail, in China, at Fall For Dance. There are multiple videos of it on YouTube. (It became so popular that Buck came to the attention of Madonna, who took him on as a featured performer.) What’s compelling about their Swan is that it feels (still) like a spontaneous response to the music. Filled with weird-looking contortions and eerie glides on the tips of the toes, it is both deeply musical and strangely stirring. Buck instinctually feels what the music is trying to say. Buck’s reaction is trancelike and all-embracing – he’s as moved to dance to Saint Saëns as he is to New Orleans jazz or hip-hop or Galician folk. In that way he’s similar to Ma, an enthusiastic explorer of musical idioms. They’re unexpected soul-mates.

The evening was billed as a “Jookin’ Jam Session” and had a pleasing everything-goes spirit. Woetzel gave little introductions, but for the most part the night belonged to the musicians. The musical contingent was top-notch. In addition to Ma, the quartet Brooklyn Rider and the jazz trumpeter Marcus Printup played. I could have listened to Printup’s ringing high notes all night. A guy (John Hadfield) played the cajón (a wooden box-like instrument used for Flamenco percussion) and a Galician bagpipe-player, Cristina Pato, joined in. At the beginning of the evening Lil Buck leapt into some devilish footwork in response to the Celtic-sounding folk music for the bagpipe. (It’s unfortunate that Pato, the only woman on the program, felt the need to grind her hips and smile ingratiatingly as she played, the one false note of the evening.) Another Jookin’ dancer, Ron “Prime Tyme” Myles, joined in some of the numbers. Myles was also excellent, though he lacked the musical sensitivity that makes Lil Buck so compelling. The two have a playful, generous rapport. They did a kind of Jookin’ Jewish folk dance to the Klezmer tune, “Budget Bulgar,” played with great fire by the two dueling violinists of Brooklyn Rider, backed by the rest of the band. (These four young men make make a great, grinding, whooping noise when they play.) The two dancers circled each other, gliding on their toes, legs twisting on rubbery ankles, then advanced shoulder to shoulder with arms linked, like dancers at a Jewish wedding. Buck spun on his knees, then rose up slowly into an attitude, one leg raised and bent as in ballet (a typical Jookin’ move). The loose, semi-improvisational choreography was created in collaboration with Woetzel.

Then Buck danced to the stirring, burnished sound of Marcus Printup’s trumpet, as thrilling as any tenor throwing off high C’s. The duo played a little game, in which Buck riffed on the opening phrase of Balanchine’s Agon as Printup did a series of variations on Stravinsky’s rat-a-tat musical motif. (The idea was Woetzel’s.) It didn’t quite work – it was the only moment in which Buck looked constrained and unclear – but still, between one variation and the next he managed to break free and throw in some elegant, gliding runs and rhythmic walks. One of the immediately impressive aspects of Jookin’ technique is the fact that the impulse behind the footwork is concealed, so there seems to be no weight at all on the feet; the dancer propels himself in any direction with a kind of liquid, uninterrupted pas de bourrée, a series of tiny, braided steps. This unbroken continuity of motion is made possible by extremely flexible and controlled ankles, which undulate as the dancers create figure eights with their feet.

Buck’s movements became bigger and more rollicking in the “Bourbon Street Parade,” with wild twists of the torso and backward tilts that seemed to challenge gravity. A table of young men in the back began to cheer, and the dancer acknowledged the praise with a big smile. He was having a good time. Philip Glass had composed a Bach-like cello prelude for the occasion, which was played by Yo Yo Ma with his usual heart-on-the-sleeve fervor. This was the most “choreographed” number of the evening and, though not a masterpiece by any means, it revealed Buck to be a dancer searching for a deeper kind of expression. In a repeated motif, he covered his eyes, walking gracefully in slow motion. The dance was spare, almost free of eye-catching tricks. He clutched his heart; a twitch in one shoulder eventually propelled his entire body into a change of direction. A glide slowed to a stagger across the floor.

The crowd at Le Poisson Rouge, a former nightclub and now a favorite venue of adventurous classical musicians – Ópera Hispánica performed María de Buenos Aires there just recently – was not exactly what one might have expected. At a table right next to the stage sat Anna Wintour (impassive) and Alan Alda (vociferous in his acclaim) with a group of polished magazine folk. Uptown, Lincoln Center types filled many of the tables. But there were some younger people too, including a few of the more lithe, comely denizens of hipster New York. Not a terribly diverse crowd, though. It’s a tricky business, taking a form of popular “street” dance, usually performed in an ad-hoc, informal setting, and constructing this kind of high-culture frame around it. Does it falsify the original, exoticize it? Much to Woetzel’s credit, the tone of the performance itself was just right. It didn’t feel like a novelty show, but rather an evening built around music and dance, improvisation and experimentation. The final number, a rowdy Persian folk tune arranged by Colin Jacobsen of Brooklyn Rider and Siamak Aghaei and played by the full cast (with the two dancers improvising onstage), felt like the fin de fiesta at a flamenco performance. A celebration of communal music-making, a conversation among equals. Lil Buck was completely in his element. 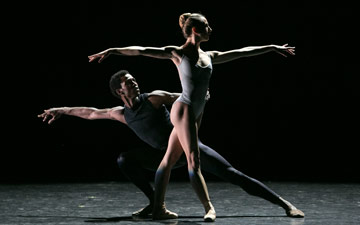