London’s Roundhouse will present a series of special events, taking the central theme of ‘time’, to complement a major new installation by leading British artist Conrad Shawcross as part of Bloomberg Summer at the Roundhouse during the month of August 2013. Choreographers Wayne McGregor and Siobhan Davies, circus dance performer Iona Kewney in collaboration with musician Joseph Quimby, and the London Contemporary Orchestra will each respond to Shawcross’s installation Timepiece, a large-scale mechanical work that will transform the Roundhouse into a vast time-keeping device.

Resident Choreographer of The Royal Ballet, Wayne McGregor, will stage Azimuth in the Roundhouse with his dance company Wayne McGregor | Random Dance, on 4, 11 and 25 August. Dancers will orbit Shawcross’ machine in a series of startling kinetic interventions and enigmatic shadow drawings.

Siobhan Davies Dance will present ROTOR, a series of live works that will appear to manipulate time in order to achieve a set of tasks at various points throughout the day on 17, 23 and 24 August. Described as “exhilarating… stimulating and worthwhile” by the Financial Times at its premiere in 2010, ROTOR returns to London after three years, having toured many of the UK’s leading regional arts institutions, including the Whitworth Art Gallery in Manchester, Turner Contemporary in Margate, and Dovecot in Edinburgh.

On 22 August, London Contemporary Orchestra (LCO) will bring its acclaimed Imagined Occasions series to the Roundhouse. The event will begin at sunset with a performance of Vivier’s Zipangu, followed by a sound-walk to the Roundhouse, where they will perform works from Stockhausen’s epic KLANG – Die 24 Stunden des Tages (Sound – The 24 Hours of the Day) with Kathinka Pasveer, Stockhausen’s long-term collaborator. Performance Designer Helen Scarlett O’Neill, best known for her work  with Secret Cinema, has created a sensory experience to accompany the performance of KLANG.

A two-part series of Live Lates will take place on 8 and 15 August. The first of these events will feature a collection of emerging artists exploring the spoken word, experimental voices and electronica, while the second will see circus dance performance artist Iona Kewney and musician Joseph Quimby working together to create a visceral, visual and sonic response to Shawcross’s installation.

Shawcross will also take part in two special in-conversations. On 4 August, the artist and Wayne McGregor will discuss their collaboration and inspiration. This will be the second time that Shawcross and McGregor have collaborated, having previously worked together on the ambitious project Metamorphosis: Titian 2012 at the Royal Opera House. On 5 August Shawcross will also host an in-conversation with the historian of science John Heilbron on the history of timekeeping.

Live Lates
Thursday 8 August 2013, 8pm
Pay what you like
An evening of performances by emerging artists exploring spoken word, experimental voices and electronica. 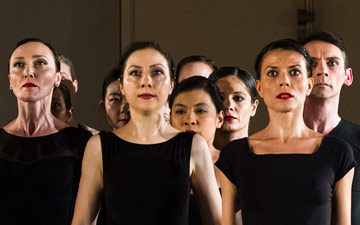