Back in Black, and White

After a gala devoted to new works (and to fashion) and a week of Swan Lakes, it was bracing to be back in the land of Balanchine for the first of several “Black-and-White” evenings. The program, a compilation of modernist ballets set to music by Webern, Hindemith, and Stravinsky that span three decades (1946-1972), is a kind of compendium of the choreographer’s most radical, game-changing esthetic. Its distinctive mix of courtliness, mystery, and eroticism still surprises. Not to mention its musical intelligence, which can make sense of a work as impenetrable – and as seemingly undanceable – as Anton Webern’s pointillist Opus 21 symphony. What most struck me on this particular evening was the transparency, and clarity of intention, that marked each work.

It is even more striking given that so much new choreography seems to lack this particular element: what, exactly, is it trying to say? These ballets – The Four Temperaments, Episodes, Duo Concertant, and Symphony in Three Movements – are like finely-wrought poems: they may require some interpretation, but there are messages embedded in the choreography. And these crystalline steps, which at first appear quite abstract, tell stories.

One of the stories Balanchine is telling regards his unending conversation with the building blocks of ballet. The placement of the foot in battement tendu is endlessly reconsidered, as are the positions of the body in croisé and effacé. Insistently, Balanchine underlines the structures – beginning, middle, end – of his own musically-based phrases, each time returning to home base, either in a parallel position (as in Episodes) or in what is commonly known as B+ (attitude à terre), the back leg tucked behind the front knee and the body at a slight angle away from the audience. Or he shows us the clean, unadorned transition from one position of the arms – held straighter than in classical ballet – to another. “This is the alphabet, now let’s see what we can do,” Balanchine is telling us.

The evening began with a brief musical introduction by the orchestra – raised up to stage-level – led by its interim music director, Andrews Sill. I’ve come to look forward to these mini-lectures, illustrated with musical examples. In his intelligent but non-pedantic way, Maestro Sill highlighted some of the musical gestures from Hindemith’s Four Temperaments, as when, in the “Choleric” variation, the piano and strings engage in a kind of heated argument. Close listening, in turn, reveals all the more clearly the ways in which Balanchine’s choreography addresses the music. In “Choleric,” blisteringly danced by Ashley Bouder, the soloist traces a tight coil of chaîné turns (echoing an upward spiral on the piano) while the ensemble goes through a sequence of monolithic unfoldings of the legs, as emphatic as the melody for the full complement of strings. A moment later Bouder, with a decisive rond de jambe from front to back, seems to say, “that’s enough” (her arms complete the thought); the piano does it too, with a decisive three-note resolution.

Bouder was the crackling highlight of Four Temperaments; she burst onto the stage, barely skimming the ground in a series of prickly gargouillades. And, yes, she fell, but who can fault her for attempting the impossible? In “Choleric,” her sharpness of attack and laser-like footwork – which can overwhelm lighter, more pliant choreography – is put to phenomenal use. But there were other highlights as well: Robert Fairchild’s “Melancholic,” which was less despondent than one is used to, but psychologically weighty, like a deconstruction of his interpretation of Apollo. And Ashley Laracey and Justin Peck’s delicate but sensual interpretation of the third theme, with its hints of dependence and control – he spins her dispassionately, like a top, she straddles his leg – and a quotation of the “dark angel” theme from Serenade. Since becoming a choreographer of note, a new rhythmic acuity has sharpened his dancing.

Episodes is a box of mysteries. The first section is almost provocatively detached, its courtly gestures – the ceremony of the offering and taking of the hand – intermixed with hyper-stylized, isolated extensions of ballet esthetics: interlocking elbows (which will return with a vengeance in Symphony in Three Movements), flexed feet, sexy lunges with one toe digging into the ground, decidedly un-ceremonious squats with the legs set wide apart. The second section of Episodes (set to Webern’s Five Pieces, Opus 10), reads like a mystery story, danced with cool allure by Teresa Reichlen and Ask la Cour. Trailed by spotlights, they navigate a dark sea, then meet for a strange, detached but clearly erotic encounter. (How does Balanchine manage to slip in the most sexual imagery without appearing vulgar? That too is a mystery.) The woman steps over the man’s shoulder again and again, taunting him with her groin, just inches from his face. As he sits on the floor in a kind of daze, she leans her head back toward him in a deep backbend, pelvis angled away and at the audience. There’s no mystery here. Reichlen dominates her partner with quiet authority. Then he takes her by the waist and cartwheels her onto his back, her legs extending over his shoulders like horns. The two depart in this locked-together pose. Who is possessing whom?

The lingering aura of this encounter threatens to overshadow the following section, which again features a couple and an ensemble, with soft, rag-doll-like movements for the lead (Janie Taylor). The ballet closes with a grand, even regal rendering of Ricercata in Six Voices from Bach’s Musical Offering. The emotional resonance of its pared-down, formal choreography, built from the most basic steps of the ballet canon, builds in a slow, inexorable crescendo. Maria Kowroski looks ravishing here, her long limbs beautifully defining the empty space around them. Order, space, radiance. If only Kowroski would look up from time to time – at her partner, at her realm – the impact would be twofold.

The most charming performance of the evening was Megan Fairchild’s, in Duo Concertant. With her playful but unmistakably sensual femininity, and a kind of gleeful informality, she makes this ballet, which can easily seem coy, fresh again. There is joy in her dancing, echoed in her skittering, staccato shifts of tempo. The only thing missing now is a real connection with the onstage musicians, understandably focused on Stravinsky’s tricky score. But if the violinist (Kurt Nikkanen), especially, could find the time to relax and respond, even slightly, to the dancers’ gaze, what a joy that would be. The evening closed with the energetic burst of Symphony in Three Movements. The spine tingles as the diagonal of women in white (hair clasped in jaunty, swishing pony tails) transfers its weight from one leg to the other, pivoting from back to front in fully stretched arabesque à terre, arms extended. Balanchine turns this almost mechanical fact into a momentous event, a wave produced by a series of adjustments, large and small, but also a mirage-like echo of the diagonal of wilis in Giselle. The women in their stark leotards are the essence of the corps de ballet, but also girlish warriors, releasing thunderbolts from their limbs. It’s moments like this that keep us coming back again and again to New York City Ballet. 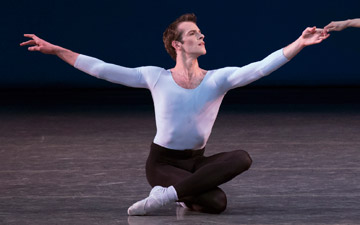