Emerging from the afternoon’s programme in Scottish Ballet’s adventurous Dance Odysseys series I ran into a friend. ‘Seeing Pierrot this evening?’ I asked. ‘Delighted to say I have to be somewhere else,’ he said. ‘Can’t stand that piece!’ I was stunned. What? Not like Pierrot Lunaire? What’s not to like in this poetic, funny, heartbreaking meditation on innocence and vulnerability?

Who isn’t first charmed by white-faced, moonstruck Pierrot swinging happily around on his tower and then outraged at his treatment by the two chancers who invade his space and abuse his trusting welcome? Shrink a bit, perhaps, from the Schoenberg score, with its swooping vocal gymnastics, but you’d have to admire the pared-down simplicity of Glen Tetley’s choreography, the sheer elegance of Pierrot’s aerial acrobatics set against the ground-level punch-and-judy antics of the two invaders. And, if you want to get serious, it really was a ground-breaking work.

It’s hard to believe that this was Glen Tetley’s first real attempt at choreography, created back in 1962, when ballet and modern dance were worlds apart and proper companies didn’t really do that kind of thing. In making it Tetley had drawn together the twin threads of his own training: ballet taught by Antony Tudor plus techniques absorbed from Martha Graham and the early pioneers of modernism. What emerged wasn’t dance in everybody’s book, any more than Schoenberg’s score was considered proper music by most, but it had its own quirky kind of classicism. As admiration began to build in the States, it didn’t take long for the canny Marie Rambert to snap the piece up. In 1967 Pierrot Lunaire helped her company begin its crucial transition from classical to modern and it made a star of Christopher Bruce, the one-and-only, the definitive Pierrot. Full marks, then, to Christopher Hampson for including it in this Festival season and reminding us of its well-deserved place in the dance pantheon, fitting snuggly between the archive films of The Green Table etc and the experimental work from new young choreographers. And it certainly didn’t look its age.

So, how to convince sceptical friend? Rule one is not worry about the sung/spoken words, even if you could hear them. Schoenberg’s original text – three sections of seven songs each: marvellously sung/spoken here by soprano Alison Bell – is a complex narrative detailing Pierrot’s encounters with love, sex, religion, crime and violence, and it ends with crucifixion (yes…) and little hope of redemption. Forget the detail. Tetley strips it all down to the simple set-pieces of the commedia dell’arte and its stock characters: innocent Pierrot, at once hero and fool; swaggering, scheming Brighella and heartless Columbine, temptress, deceiver and first-class tart. By the end, trusting Pierrot has been robbed of everything by these two – his home has been invaded, they’ve even stripped him of his clothes. Rouben Ter-Arutunian’s set design is as brilliantly austere as the choreography. Pierrot’s scaffolding tower recalls the playground climbing frame of everybody’s childhood and fixes him immediately as an innocent abroad. Domestic life with Columbine is conjured up by a line full of washing, soon given short shrift as she stomps off on search of more exciting company.

In my book nobody has ever truly rivalled Christopher Bruce in the role, either for pathos or style (and that includes Nureyev), but Luke Ahmet came close. Lithe and sinuous, he was carelessly confident in his negotiation of Pierrot’s home in the clouds and, when earthbound, scampered anxiously about like a balletic Frank Spencer. Owen Thorne was a fine Brighella, a playground bully strutting around with wide sweeping gestures and nifty footwork; Bethany Kingsley-Garner a demanding, conniving Columbine, conveying much by the toss of her head and angle of her nose in the air. I suppose sceptical friend would say that Tetley didn’t establish any real choreographic vocabulary here, compared to what he produced in his later work, but there’s style, energy, drama, emotion and comedy in spades. Maybe it’s time for him to take another look…

Kathy Elgin was Co-Editor, along with her dear friend and mentor John Percival, of Dance and Dancers magazine in the 1980s. She now writes regularly for the Dancing Times and Dance Gazette, as well as being the author of several books for young people on Elizabethan history, design and fashion. 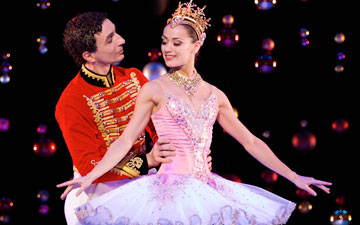