Naughty Peter Gets His Way

It’s not easy to find children’s shows that also hold up as intelligent works of art. This is part of the reason why Balanchine’s Nutcracker is so beloved. Its subject is the inner life of children, but its construction is as solid, and as seriously-considered, as that of any other Balanchine ballet. And Tchaikovsky’s music for Sugarplum and her Cavalier is just as sublime, in its way, as the music he wrote for the lakeside pas de deux in Swan Lake. Nutcracker plays another function as well: it is a beguiling introduction to the art of ballet and the magic of the theatre.

The same is true, on a smaller scale, of Prokofiev’s Peter and the Wolf, originally commissioned in 1936 by the Central Children’s Theatre in Moscow. Its purpose was overtly didactic: Prokofiev was asked to write a programmatic symphony with a simple plot, conceived to teach children about the instruments of the orchestra. The setting is the Russian countryside, where the reckless Peter lives with his grumpy grandfather on the edge of a meadow, near a forest. He disobeys strict instructions not to walk in the meadow without adult supervision. While there, he encounters a series of animals: a duck, a cat, and his friend, a playful bird. But danger looms: a wolf emerges from the forest and gobbles up the duck. Peter, ever resourceful, devises a trap, and all ends well.

Each character has its musical alter-ego, a phrase performed by a specific instrument or cluster of instruments. Peter is represented by a sweeping, carefree melody for the strings that evokes his confident stride through the tall grass and the wide Russian skies. The duck’s motif is a plaintive tune in a minor key, played by the oboe; it calls to mind both the bird’s elegant glide across the surface of a pond and its comical waddle on dry land. Somehow, it also makes us aware of the duck’s vulnerability. The wolf is represented by an astringent blare of horns, playing in close harmony. Prokofiev’s musical menagerie is amazingly vivid, perfectly suited to the simple story (which he also wrote). Even though the composition was an assignment, Prokofiev must have relished it; it oozes pleasure.

But – and here lies its lasting power – it doesn’t talk down to its audience, musically or dramatically. The harsh realities of life are not papered over with saccharine melodies or unrealistically happy endings. The duck dies as a result of her foolishness. Near the end, we are reminded of her plight as we hear her unhappy quacking in the wolf’s belly. And Peter is told, rightly, that he, too, could have died. Life is dangerous. Furthermore, why does Peter live alone with this old man? Where are his parents?

For the past seven years, the Works and Process performance series has presented Peter and the Wolf, narrated by the designer Isaac Mizrahi, a frequent collaborator of Mark Morris’s, and illustrated by whimsical installations. To fit the reduced dimensions of the Peter B. Lewis Theatre, tucked underneath Frank Lloyd Wright’s museum, a chamber version of the music is used. Mizrahi steps into a long line of performers to take on the role of the narrator, from Boris Karloff, Alec Guiness and Carol Channing to David Bowie and Captain Kangaroo. As one might expect from this Brooklyn-born fashion guru, Mizrahi’s take is is urbane and wry, with funny little asides; he plays up the role of the sophisticated but folksy gay Jewish uncle who always tells the best stories but isn’t terribly amused by anyone else’s.

For this year’s run (Dec. 7-15) Mizrahi has turned Prokofiev’s musical tale – already delightful – into a complete theatrical staging, and added dancing. Already active as an opera designer, he has recently taken up directing opera. He’ll stage a Magic Flute for Opera Theater of St. Louis in May. There, as here, his collaborator is the inventive young choreographer John Heginbotham, a former Mark Morris dancer with a humorous streak. The Mark Morris “school” of musical theatre seems to be alive and well, and for this we can be glad. This Peter and the Wolf works marvelously well.

Mizrahi has translated the action to New York’s Central Park. The set is simple, tailored specifically to the small theatre: a metal fence, a tree, a park bench, a couple of boulders, and a trash can for the narrator to perch on as he surveys the scene. The musicians are arrayed to the left and right of the stage, with the horns concealed in the pit, and the clarinet and oboe seated among the dancers, on the aforementioned boulders. Practical solutions become ingenious elements of the stage action. The top branch of the tree runs alongside the top edge of one of the theatre’s interior walls; this allows the dancer who plays the bird to “perch” above the audience. When Peter climbs the tree, he does so with the help of a banister that leads up the side of one of the theatre’s staircases. The duck “swims” in the small orchestra pit, so that we see her only from the waist up, arms fluttering in a doddering evocation of The Dying Swan. The wolf is concealed in plain sight on a park bench behind a copy of the Times. He has the louche slouch of a mugger.

The casting is just as clever. The diminutive dancer (Macy Sullivan) who plays Peter, in short pants and a cocky baseball cap topped by a pinwheel, could easily pass for a twelve-year-old boy. Several others, including the illustrator Maira Kalman, who plays the duck, are personal friends of Mizrahi’s. Her performance is endearingly wacky – an impression heightened by her dishevelled tutu, waddling walk, and thick glasses. The stately Gus Solomons Jr., a veteran of the Martha Graham and Cunningham troupes, plays the grandfather, who suffers from a bad knee and moments of confusion. Daniel Pettrow, the wolf, acts mostly with his eyes; he is the embodiment of the snarling, but ultimately feckless, bully. My personal favorite was the portly Derrick Arthur as a bumbling and cowardly hunter who crept toward his prey in a sidewas pas de bourrée and was frightened by the sound of his own gun.

Add to this Heginbotham’s witty, understated choreography, and it made for a charming show. The cat’s eyes (Lindsey Jones) shifted from left to right, like a wall clock; Peter and the bird (Jennifer Sydor), who was the only dancer on pointe, did a fluttering, happy pas de deux, with echoes of the famous “bluebird pas de deux” in Sleeping Beauty. Here, it was the bird who supported the boy in arabesque. Peter’s carefree dancing was full of reckless spins in attitude, stomping rhythms, and skipping leaps. Heginbotham captured the blithe quality of the string melody that accompanies Peter throughout the half-hour work, the sense of endless possibility. My only reservation: the choreography for the bird could have been lighter, faster, more brilliant, to match Prokofiev’s chracterization.

What made this Peter so right-feeling was that all elements of the show – storytelling, music, stage action – were so well integrated. The music, vividly played by the young musicians of the Juilliard Ensemble under the baton of George Manahan, was never overshadowed. Having some of the musicians onstage bound them even closer to the characters their music brought to life. This harmonious coming together of theatrical elements happens less often than one might expect. No aspect was created with the intention to impress with its cleverness, but rather to entertain through simple means, and yes, perhaps, to teach. I, for one, hope this Peter and the Wolf comes back next year. 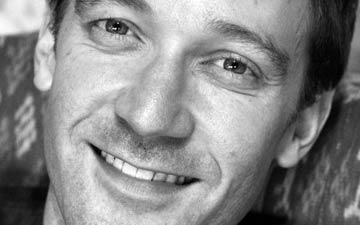 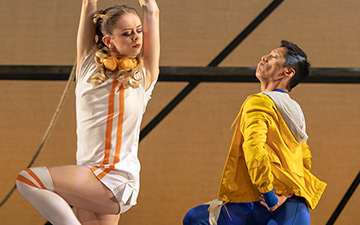 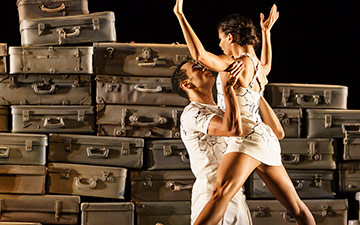