Almost 20 years since it first premiered, Matthew Bourne’s sharp, satirical and exquisitely beautiful Swan Lake feels as up to the minute as if it were choreographed last week. Armed with an unhappy prince, an artillery of savage references to royalist celebrity culture and a flock of mesmerising, terrifying swans, Bourne strips away the ballet’s traditional ice white delicacy and instead matches Tchaikovsky’s swooning score with his own high melodrama.

His dance theatre take on the tale has the feeling of an Angela Carter story; a folk tale re-imagined to draw out its resonance and relevance. A modern-day Prince is hustled and bustled about his princely duties by his iron-mannered mother, humiliated by a graceless hanger-on girlfriend, papped and headlined, bored and coddled in equal measures – until one night he finds himself watching the swans on a midnight park lake. Either in his real or imaginary world, he is charmed – and who wouldn’t be, for Bourne’s famous male swans are intoxicating, magnetic monsters – and dances with the swan leader until morning, in joyous rapture at having finally found a living being to form a true connection with.

All doesn’t end well however, and Bourne’s modern climax draws on echoes of Blanche DuBois, as well as providing a fresh and violent warning against the perils of sexual obsession. It also seems fitting with the violent swells of the music that the Prince and his (imaginary?) lover’s deaths should not come in the watery grave of a lake, but, in what is surely one of theatre’s more gruesome deaths, by being pecked to oblivion by a mob of swans.

For this is most certainly the swans’ show. While Lez Brotherston’s kitsch design and the sharp gaudy references to modern royalty carry the opening scenes in both halves, it’s the strange beauty of the swans that shows us this is no satire. They brim with fierce potency, reminiscent of the old legend that a swan can break your arm with its wing. All muscle and feathers, they are sensuous, exotic and menacing, stamping their flat feet, tribal-style, their breath coming out periodically as one collective hiss. 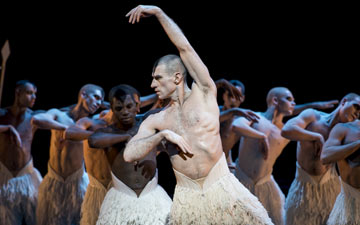