Like it or lump it, there’s no denying that anything by Pina Bausch is “Art” with a capital “A.” Theatrical, witty and often squirmworthy, Bausch’s seminal 1978 work Kontakthof came to the Brooklyn Academy of Music (BAM) this October in celebration of Tanztheater Wuppertal’s New York debut 30 years ago.

According to the New York Times’ Anna Kisselgoff, that 1984 debut was a cacophony of buzz. 30 years later, and midway through the troupe’s weeklong run, you would have thought it was opening night. The crush was immense Wednesday night, and nearly the entire balcony at BAM’s Howard Gilman Opera House was under 30 and taking notes, no doubt budding academics, dance and theater students. That’s the thing with Pina: the embrace of the theater has given her work a virtually unrivaled crossover, academic interest and hipster street cred. The Wim Wenders documentary probably didn’t hurt either.

For anyone who has seen the film Dancing Dreams – a documentary tracing Bausch’s staging of Kontakthof on teenagers with no dance training – Wuppertal’s grown-up version is much more brutal. The tender, sweet confusion of adolescence is rarely here, but the awkwardness is. Set in a dancehall and using syrupy German pop songs from the 1930s, Kontakthof‘s knowing irony is established from the beginning, the timeless tunes of wooing love rarely represented by the dancers on stage. After male and female dancers primp and preen themselves en face, the audience a stand-in mirror, the action gets rolling pretty quickly, and Kontakthof is a wild ride of groping, grabbing, slinking, humping and bumping. Maybe there is a twinge of romance in there, somewhere, but for the most part the work illustrates the gross depths to which humans can plummet in search for companionship, whether seeking carnal satisfaction or something more.

But the work is no mere orgy. The real crux of Kontakthof and where the piece really thrives, is in its dramatizing of human courtship, with all its complications and desperations. The women’s costumes alone – sleek silk dresses in a variety of colors – sing sex, with sensual tucks and gathers highlighting curves and erogenous zones. The men wear suits, which Bausch puts to hard work: they get poked, prodded and pulled by the women and flung off by the men. One of the few sweet moments occurs when a man and a woman strip, taking off everything. Even in “high” art, so often it is the woman who shows physical vulnerability, but here the guy strips down too, tighty whities/Y-fronts, and all. Much of the humor is derived from human awkwardness in pursuing our attractions: graceless dance partners, missed connections, insecurities, embarrassments and ungainly sexual maneuvers.

There are infinitely small, exquisite moments in Kontakthof that deftly communicate the tiny gestures of desire, both conscious and unconscious. A look, a glance, a lean, a wrist flick, a wink and a hip jut can all appear very different but say essentially the same thing. Bausch incorporates a lot of lunacy into the work – women laughing, flailing and men also going insane – with an astonishing violence. A literal interpretation would be that our appetites can drive us crazy, and Kontakthof leans on the theatrics of mania a bit much. Bausch is known for her fondness for repetition but in such a bold, hysterical form it can easily lose its punch.

Herein lies one of the more unfortunate traits of Kontakthof: there is more madness than dancing. Yes, Bausch’s troupe was founded on the incorporation of theatre with dance, and expanding the form, but Tanztheater Wuppertal dancers are truly exceptional and intelligent, and not just as thespians. The men get a few chances to show off their chops and when the women really get going, the stage is ablaze with their hair, swirling around in gorgeous tornadoes. More than just balletic headbanging, the moves – and the dancers – are truly enthralling, and the stingy distribution of them leaves something wanting. Veteran Bausch dancers Julie Shanahan and Nazareth Panadero both gave expert, full-bodied performances.

If the quantity of robust dancing is slim, the full package is not. While it is sacrilege to say it, Kontakthof – with a running time approaching three hours – is just too long. The drama drags and loses its force after intermission. One of the final scenes, an uncomfortably long passage of a woman getting molested by a pack of men, seems unnecessary given some of the physical tussles in the first act; we have already seen this, and while repetition can sometimes reveal new horizons, in this case not much is gained by the repetition of abuse and its dissection under a microscope. Arlene Croce’s (in)famous line regarding Bausch, calling her work a “pornography of pain,” haunts.

But Bausch, the Nan Goldin of the dance world, didn’t aim to be pretty or pleasing. Kontakthof rings with an almost annoying resonance long after it’s over: it’s hard to put away, because it’s all too familiar. At the end of the day what Bausch affirms is that desire itself is innocent, but in our efforts to consummate it, we become perverse. 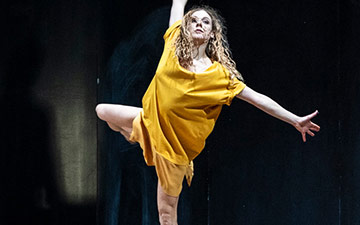 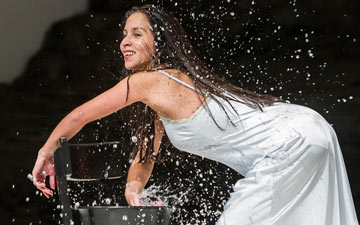