Many dance performances (perhaps most) are reasonably well served by rational analysis: they can be thoroughly evaluated on technical innovation, historical accuracy or some other quantifiable benchmark. Every so often, though, a performance offers something ineffable and more affecting, arguably more important, and the critic happily drops the scorecard on the theater floor.

Wendy Whelan’s Restless Creature, performed on Thursday January 15, in San Francisco as the kickoff to a multi-city tour, falls into the latter category. Of course, there is plenty to note about the choreography, which had its high and low points. But anyone can do steps. The gift of Restless Creature is the rare pleasure of being in the room when intelligent artists meet as equals and create together sincerely, openly and without apology.

Restless Creature premiered at Jacob’s Pillow Dance Festival in August 2013, about a year prior to Whelan’s retirement, at age 46, as one of New York City Ballet’s most treasured ballerinas. (The show went to Covent Garden the following July.) Eager to explore contemporary dance on her own terms, Whelan chose four highly-regarded choreographers to collaborate on a suite of 15-minute duets that each would dance with her: Alejandro Cerrudo, resident choreographer at Hubbard Street Dance Chicago; MOVE: the company founder Joshua Beamish; 2014 MacArthur fellow Kyle Abraham; and 2013 Guggenheim Fellowship awardee Brian Brooks. The result is a suite of four vastly different, very personal expressions of music and movement, united by Whelan’s graceful presence (no matter how earthbound the choreography, Whelan simply floats).

Restless Creature opens with Cerrudo’s Ego et Tu, a deceptively conventional-looking contemporary piece defined by furling and unfurling arms, deep lunges and delicate lifts, and danced over driving minor chords by composers including Philip Glass and Ólafur Arnalds. What elevates the steps is the dancers’ chemistry: Cerrudo is stone and Whelan is liquid, and she softens him while also bending to his barest touch.

Bach’s Partita No. 2 gets a lot of play these days, but Beamish made it sound fresh by choreographing an insouciant dance-off for himself and his partner – Conditional Sentences. Syncopating their tendus and passés, throwing in off-kilter coupés and hip-hop isolations, they come across as two sparrows flitting about for the joy of it. The energy flags during a largo section when they shift from pose to pose on the floor; luckily, they wrap the piece up on an energetic note.

Abraham strikes a postapocalyptic tone in The Serpent and the Smoke. To a grungy, sample-heavy score by Hauschka and Hildur Guðnadóttir, he and Whelan approach each other like wild cats, hesitant but intent. Shrouded in backlit shadows, they find connection in slow embraces, violent shimmies and hunched développés à la seconde. At once more cerebral and more carnal than the other pieces, Serpent feels like a private conversation in a secret language.

As the evening wanes, Whelan and Brooks forge an unbreakable bond in First Fall. Touching continuously throughout the piece, she caresses his face, he lifts her with his knee; repeatedly, she lies back onto him with arms outstretched as he falls to the floor, a motif that outstayed its welcome. Selections from Philip Glass’s Brooklyn Rider form a rhythmic undercurrent to their emotional tableaux, though their relationship is unclear – man and wife, friend and friend in need, victim and rescuer? Or maybe they were just dancing. 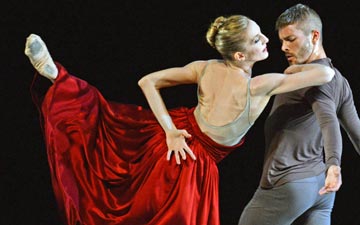 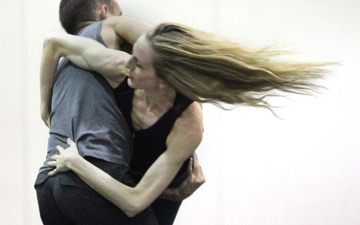 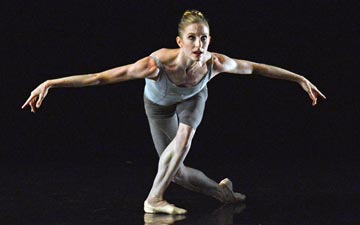 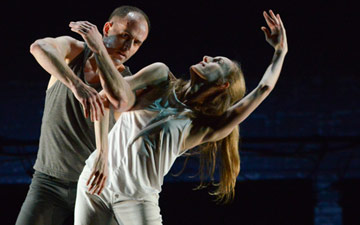