Gwyn Emberton formed his own company, based in Aberystwyth, in 2012, after a career as a contemporary dancer, teacher and choreographer in Britain and Israel. He is from Wales, his five experienced dancers from different European countries. For his first evening-length work, My People, he drew on the short stories of controversial Welsh writer Caradoc Evans, whose book of the same name was first published a century ago.

Evans was pilloried at the time as ‘the best hated man in Wales’ for his savage accounts of chapel-dominated rural communities whose piety was perverted and hypocritical. His mythical village, called Masteg, was far nastier than Dylan Thomas’s whimsical Llarregub. Evans succeeded in shocking complacent Welsh idealists who believed that simple god-fearing sons and daughters of the soil were purer in heart than corrupt town-dwellers. Poverty and ignorance, Evans knew at first hand, debased even the most devout citizens.

His ‘ferocious fictions’ about Nonconformist ministers, farmers, villagers and their wives were, apparently, satirical caricatures. Emberton’s role-players, however, are sincere – as convinced of their motives as the witch-finders in Arthur Miller’s The Crucible. Unfamiliar as I am with Caradoc Evans’s stories, I can only guess at what drove the dance characters to behave as they did.

The action took place in a black-box theatre within a High Victorian building (a former orphanage and military hospital, now a drama college) in south London. The gothic setting was atmospheric, even though hardly appropriate for a Nonconformist context. Cleverly lit by Aideen Malone, the cast emerged from the gloom, their shadows hovering like sinister ghosts before reclaiming the darkness.

First to appear was Albert Garcia, a tortured soul in a black cassock. He was joined by others, rolling, kneeling and lunging in rhythmical unison, who seemed to hold him in respect as their minister. Isolated from them was a woman in a blue smock (Rachele Rapisardi), tethered by a long rope attached to the rear wall. She pulled herself along it, hurled herself against it as she tried to escape. A farmer’s wife in one of the stories, it seems she was imprisoned by her husband and taken out occasionally restrained by a cow’s harness. In the dance piece, her plight met with no compassion. When she broke free, she was dragged down by three men and tethered again.

A second woman, Anaîs Michelin, indulged in an intimate duet with the minister until she was caught and killed by a jealous young man (Ryan O’Neill). The solemnity of a funeral scene gave way to a frantic, scrabbling solo for a fiendish man in a long black coat (Emberton), a tramp in the story The Devil in Eden. After a mesmerising, seductive encounter with Michelin, now in a different role, he appeared to end up as a corpse, upraised on the shoulders of two men, only to be transformed into an angel dressed in white. (This interpretation is based on the descriptive score, commissioned from Tic Ashfield and Benjie Talbott.)

Wailing voices and ominous percussion accompanied a dramatic episode in which a pilloried girl (Federica Esposito) was viciously attacked by another woman, causing her to writhe in agony, pulling red strings out of her stomach – or womb. A hauntingly vivid sequence, it involved others in the community crawling towards her like animals, then placing her upright with her feet on the back of an abject man (O’Neill).

Left alone, she became involved in a tortuous relationship with the minister, rebelling against his dominance then humiliating herself in order to please or placate him. Emberton’s choreography is graphic and gripping, telling of turbulent emotions in an inward-looking society. Like Cathy Marston, he is exceptional in being able to undertake complex stories in contemporary dance. Knowing Caradoc Evans’s writing in advance would be an advantage in pinpointing who was who in the hierarchy of this claustrophobic community – the problem that occurs in danced versions of The Crucible. Nonetheless, Emberton’s narrative impulse is compelling, as is his dancers’ commitment to their roles. My People is a mature work, developed in close collaboration with the composers, that deserves to be widely seen. 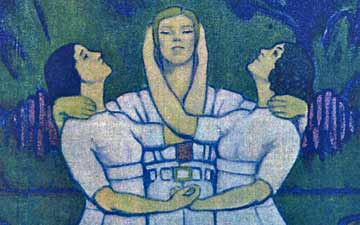