ROH Live cinema screening of La Fille mal gardée across the UK and world on 5 May 2015: www.roh.org.uk/showings/la-fille-mal-gardee-live-2015

Jann Parry talks to Laura Morera and Vadim Muntagirov about all things La Fille mal gardée, and a few other things too…

The role of Colas in Ashton’s La Fille mal gardée has been yet another debut for Vadim Muntagirov since he joined the Royal Ballet just over a year ago. When we meet in the Royal Opera House he tries to remember all the roles new to him since he left English National Ballet: ‘Lensky in Onegin, Symphonic Variations, Don Q, Des Grieux in Manon, Winter’s Tale, Alice’s Adventures in Wonderland, 4 Ts – now Fille. It’s been quite a year. Whenever my mother came from Russia to see me dance with ENB, because it was Christmas time she only saw me in in Nutcracker three years running. I hope soon she’ll be here for Fille. Like Winter’s Tale, it’ll be surprising for her.’

He had never seen La Fille mal gardée danced live before his first night performance with Laura Morera as Lise on 16th April. She has been in it many times since she joined the Royal Ballet in 1995, though she spent years as one of Lise’s friends before she danced the leading role. ‘First time was with Ricardo Cervera, then when he was injured, with Steven McRae in 2010. I’ve never had Will Tuckett as Widow Simone before, though we’ve known each other for 20 years. He’s always been very protective of me, very fatherly now motherly. It’s my turn to look after Vadim – though he’s super chilled-out. I’d forgotten how tricky Fille is for a beginner because of all the props. You have to start from scratch to learn the ribbons, and they can easily go wrong as they did for Steven and me. It’s happened to almost everyone.’

Muntagirov comments: ‘For me, it’s the first ballet where you don’t worry about the technique but about the ribbons and bows. Usually in fun ballets the steps aren’t too hard as you make the audience laugh, but in Fille you have difficult jumps holding a stick in one hand, hopping and hopping around, then suddenly you do a big lift without showing effort.’ He said that when he first danced the Michael Somes part in Symphonic Variations, he had thought (from watching videos and DVDs, as for Fille) that Ashton’s choreography looked simple. ‘But everybody kept telling me, “Just wait, you’ll find out”, and I did. Symphonic is the hardest role I’ve ever done.’

He was superb in the ballet, owning the stage from the start. For Colas, he says, Donald McLeary told him he mustn’t have the noble “I’m here” presence required for Symphonic Variations or Siegfried in Swan Lake. ‘Instead, I must be natural and relaxed – “Hey, I’m here”, just a boy on a farm. When I am Siegfried, I walk with my feet pointed, elegant. As Colas, I walk on my heels. But I don’t have to act being a 25-year-old boy. Maybe in ten years time, I’ll find it harder!’

McLeary came in to polish the final rehearsals, ensuring the Ashton style was as authentic as possible, once the dancers had already been coached by Lesley Collier, Christopher Saunders and Kevin O’Hare. ‘We learn the ballet from the Benesh notation’, says Morera, ‘then with the coaches we all agree on a version. I had Alexander Grant from the first time I did Lise. [Grant, the original Alain in La Fille mal gardée, owned the rights to the ballet until his death in 2011.] Not everyone agreed with what he wanted, you know, but I found him very endearing and we got on very well – I try to remember everything he told me. Lesley [Collier] is wonderful – she reminds me how ‘English’ Lise is, like Ashton’s sense of humour.’

Morera comments that that changes come about in ballets because choreographers alter steps for different dancers. ‘Liam Scarlett, who I’ve worked with quite a lot, can make things quite different for first and second casts, and of course people remember their version as the right one. Why I love this company is because you get so much knowledge from previous performers. You have all this information to take your interpretation to another level, so you can give an individual performance, not a carbon copy of someone else.’

Muntagirov claims not to be intimidated by illustrious predecessors when he inherits a role. ‘I try not to think about them, just to enjoy what I can do with the opportunity. I know how Russian dancers long for roles in dramatic ballets in the Royal’s repertoire, so I’m privileged to learn them – even if sometimes, it’s three different ballets in one day’s rehearsal. Much more than in ENB, where we toured just a few ballets at a time.’

I ask him about the hazards he encounters in Fille, other than the ribbons and pitchfork. ‘The dance with the bottles in front of the painted cloth – because I have such long legs, there’s not much room for the pirouettes in attitude before the split jumps. And the bum lift at the end of the harvest pas de deux: I’d learnt that kind of lift holding onto the girl’s leg, then pushing up when she jumped. Here I have to hold her hand, which is twice as hard. And I’m quite tired after all those very fast steps in the coda, which are difficult for me. I’ll learn to pace myself when I’ve done Colas a few times.’

McLeary told him not to rest his hands on the floor after the interlaced jumps in the harvest solo variation. It’s tempting for a tired dancer to crouch down, take a breath leaning on his hands, then stretch upwards. But Ashton required David Blair, the original Colas, to tap the floor with his fingers before ‘exploding’ upwards at the finish. The Bolshoi Ballet had made its first visits to London in the 1950s, not long before Ashton started on Fille, and he wanted to show that British male dancers could be as bravura as the Russian men. He wasn’t going to allow them to take it easy – and nor will McLeary.

So far, the Shetland pony hasn’t caused any problems. Vadim: ‘He’s so cute. He stands with his head down in the wings, like a dancer preparing, then his head goes up once he’s on stage, performing.’ Laura: ‘I met the white pony with my mum the other day going for a walk round Covent Garden. She thinks he has a better social life than me, out in the sunshine!’ Laura confirms that the pony is never given an actual sugar lump on stage: it’s all mime, including the pony’s moving lips. No treats are allowed and no water before a performance.

Morera enjoys giving the benefit of her experience to younger dancers. She is involved with her husband, former RB dancer Justin Meissner, in an organisation called Dance Tours International that provides workshops, gala performances and dance education programmes in different countries (Australia, Japan, Spain, United Arab Emirates). RB teachers, performers and staff take British ballet to places that want to learn more about it. ‘We hope to inspire people to enjoy ballet’, says Laura. ‘Maybe to have the confidence to pursue professional careers. We can pass on our knowledge, help youngsters prepare for auditions and competitions, tell them about the choreographers we’ve worked with. I love it!’

Young as he is, Muntagirov has also been teaching and coaching for the past two years at Daria Klimentova’s summer school of masterclasses in Prague. ‘I can help students to make solos and pas de deux easier by telling them when to relax and breathe, when to push in ballets I’ve danced, like Swan Lake and Don Q. Perhaps I’ll end up teaching, but I want to have lots of experience first.’ He guests as much as his busy RB schedule permits – rather less than in his ENB days, although he has Permanent Guest Artist status with the National Ballet of Japan, directed by Noriko Ohara (former Scottish Ballet principal dancer).

‘I dance with that company three times a year, knowing the dates a year ahead. Otherwise, it’s often at short notice for galas or as a replacement. Not long ago [in March], I arrived on the day of the performance with the St Petersburg Ballet in the Théâtre des Champs-Elysées in Paris to partner Irina Kolesnikova in Swan Lake. I think I came back to the Royal Ballet’s Swan Lake stronger. It’s good for me to dance familiar roles with other companies as well as new ones with the Royal Ballet.’

Because he didn’t go on the Royal Ballet’s tour of Russia last year, he was able to dance Romeo to Klimentova’s last Juliet with English National Ballet in June at the Albert Hall. After she had initially (reluctantly) accepted him as a partner straight from the Royal Ballet School, their partnership had flourished at the end of her career. He joined the Royal ballet only after she had announced her retirement from ENB.

He has, however, performed in his native Russia as a guest artist: La Bayadère with the Mariinsky Ballet, Swan Lake with the Mikhailovsky Ballet. ‘I danced on the Bolshoi stage with Daria when I won a Benois de la Danse prize in 2013 but I haven’t guested with the Bolshoi company.’ Yet? He smiles and shakes his head. ‘Maybe I’ll go back to Russia eventually. But I’m happy with the Royal Ballet. They take good care of me. I arrived unexpectedly for them in February last year and everyone has been very helpful to me in what’s been a hard year.’ When I comment that it must help that audiences always seem to be on his side, willing him to do well in each new role and applauding him generously, he smiles again, blue eyes dancing. ‘Yes, I get a big boost from audiences who respond to me. They give me confidence so I can do better each time.’ 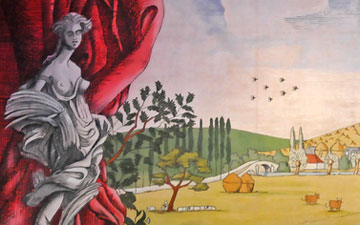