David Bintley’s Sylvia, for his own company, Birmingham Royal Ballet (BRB), is a great piece of classical dance and escapist fun. It belatedly reminds me of seeing English National Ballet’s Le Corsaire – bonkers plot but entertaining classical ballet that sends you home very happy indeed. And in the case of Sylvia Bintley has reworked the plot to start with real 20th century characters that demonstrates how a fantastical story involving Eros, Orion, Diana et al can still show us the folly of our ways.

In Bintley’s version, Sylvia starts as the story of a young lady and her love, Amynta, both servants in a Count’s household, with the Count and Contessa in strife – he has a wandering eye. All comes to a head at a party and the characters become their classical counterparts as we enter a very different world, through which Eros (the Count’s gardener in real life) guides the action and helps Amynta find his true love, Sylvia. Along the journey we have hunting nymphs, the stars of Neptune, Mars, and Jupiter, Apollo, eunuchs, slave women and pirates. You get the picture – there is a lot going on and with acts of just 34, 24 and 40 minutes nothing drags. For me it operates in three veins – conventional classical story (with much dancing to thoroughly enjoy), growing romantic love story (with much dancing to thoroughly enjoy) and as fun (with much dancing to thoroughly enjoy). Hard not to smile at Eros’s tired involvement in it all, the OTT camp characters of Gog and Magog and delight in the barmily observed pirates.

Dance-wise we got the first cast led out by Momoko Hirata and Joseph Caley as Sylvia and Amynta with Tyrone Singleton and Celine Gittens as Count and Contessa, otherwise known as Orion and Diana. Gittens as Diana, the huntress, dominates the dramatic action – it’s an imperious and technically powerful performance from a soloist, just promoted to first soloist, but who you feel should be a principal. Singleton’s Orion is a determined, laid-back, lounge lizard in trying to bed Sylvia – but there is fun too in the interactions with his incredibly camp assistants, Kit Holder and Lachlan Monaghan (as Gog and Magog), who keep appearing at less-than-ideal moments. I also very much liked Momoko Hirata’s Sylvia – she is born for classical dance like this and can do the despair and love with great good measure while dispatching the technical side with ease. She is tiny which means the dynamics of her movement and partnering are different – everything is nicely sharp and happens at speed. Jo Caley’s Amynta is portrayed as a nice young man that any mother would want for her daughter, who, blinded by Diana, finds himself doggedly walking around for much of the first two acts trying to find Sylvia. Blinded or not, he gets some good dancing in with Hirata and and they look a fine and well-matched partnership.

Central to the ballet is the non-dancing role of Eros – there to guide Amynta and us all through the action. Mathias Dingman (just promoted to principal) seemed to have the weight, weariness and fun of the character well in hand; but it’s a company piece and I particularly liked the corps of huntresses and nymphs, very much together, and the 4 pirates, each hamming up the acting marvellously. The whole enterprise is supported by delicious Sue Blane designs – we need to see more of her work in dance. And I get to the end and find I have not even mentioned the Delibes score yet – full of memorable tunes to waft you along with the joy of such escapist delight. The Bintley Sylvia should be more widely seen, but I fear it’s not a known ballet and shifting tickets is not so easy. Wise up, I say, and go see it when it next returns. 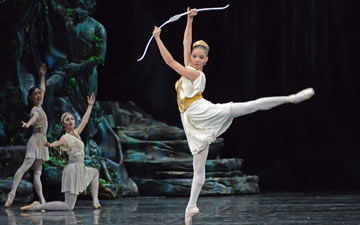