Step Afrika! dance company’s engaging performance-lecture-demonstration of Stepping ran for an all-too-brief 50 minutes at the Brooklyn Center for the Performing Arts.

After a plume of dry ice, colored by overhead lights and enveloping the bare stage, a dramatic Wizard of Oz-like voice explained that Stepping is a polyrhythmic dance created by African-American college students. Performers then entered singing a welcome song to Step Afrika! as they acknowledged one another and the audience in a kind of ritual circle dance.

As the eight dancers, both male and female, stomped and chanted with forceful strength and precision it became clear that the dance also has roots in military and drill team displays. “Brothers and Sisters!” performer/M.C., Artis Olds called. “Yessssss!”, responded the group as they sprang to attention, arms by their sides with hands in fists. This first piece, Tribute, choreographed by Jakari Sherman created many geometric and marching team formations with the performers. Right away, Olds invited the audience to join the show, “When I say Okay you say Alright!” “Okay! Okay!” “Alright! Alright!” Mindful that the audience was mostly composed of school-aged children, performer/M.C., Brittny Smith explained, “So what exactly is a polyrhythmic dance? Well ‘poly’ means many. So that means we make many beats with percussive strikes like claps and slaps. And college. What’s college? It’s a place you can go to study anything you want – even food!” The children in front of me seemed wildly excited about this prospect and let out a big cheer.

Though the dancing never lost its upbeat energy, the stepping conveyed a seriousness of purpose. One can certainly imagine the desire of African-American students attending college, especially those amongst the first to take on the challenge of desegregating previously white colleges, to participate in a dance of solidarity and grit. Though audience participation was very much a part of the choreography, one senses that the act of stepping is about the performers performing for themselves.

Elizabeth C. Fine, in her book Soustepping, notes that within African-American Greek life Stepping not only creates community within fraternity or sorority pledge rituals but also through inter-Greek step competitions. To give a taste of this, Step Afrika! put together a “mock” competition between three sorority sisters and three fraternity brothers. “You ready to judge? Just wave your hands in the air and act like you really don’t care!” rapped Artis Olds in one of the most well-known house party chants as he worked the audience into a frenzy. This was Stepping at its most physically virtuosic. The ladies clapped and stomped out a thrillingly fast beat across their bodies on a diagonal plane; this flurry of percussion ended in a surprise side split low on the floor. The fellas, not to be outdone, replied with chest claps and thigh claps around the body and stomps that ended in a back handspring to a split on the floor. The audience went bananas. Not surprisingly, the fellas were declared winners. I have to disagree though, I think the ladies should have won, the clarity of their percussive claps, unison and speed were the more outstanding. The ladies got a win in the next round though, their contrast of fast claps with a slow enactment of the Matrix step (Think Keanu Reeves slowly dodging bullets with a deep back bend) finally won the audience over.

Then in a smart change of pacing, the stage lights went dark and one spotlight shone on a performer/ M.C., Christopher Brient. He explained that during one trip to South Africa the founder of Step Afrika!, C. Brian Williams saw a young boy on the side of the road dancing a dance very similar to Stepping. Another male performer clad in a tank top, work pants and rubber boots joined Brient performing a dance where he stomped out rhythms and hit the sides of his boots in percussive strikes. “You see in South Africa many men had to work in the diamond and coal mines. Gumboots protected their feet. The miners were often very lonely for family. They came from all over and didn’t speak the same language so they used boots to talk. The miners created a Gumboot dance to communicate and entertain.”

As group of male and female miners shoveling and singing made their way to the stage, in Isicathulo, choreographed by Jackie Semela, one female miner shrieked and fell to the ground. Her boss came to her side, “What is it?” “I broke a nail!”, she wailed in a mocking tone. Even with Gumboot’s performance of physical hardship the rhythms still engaged and propeled its dancers forward. The performers moved as one energetic body; at one point, as they danced, they played one another’s boots!

While it would be difficult to prove that Gumboot, which was developed with the opening of mines in the 1880’s, directly led to Stepping in African-American Greek traditions, which emerged in the 1920’s, the connections are striking: both share propulsive rhythms clapped and marched, an elevation of spirit and an aesthetic of strength and play. The differences are noteworthy too: Stepping’s military/drill heritage creates a more exacting body geometry while Gumboot’s attention toward playing the boots with arms outstretched gives a more loose full-bodied movement quality to the dances.

Next, Brient took center stage again and invited the audience to get up and dance. After leading us through a series of call and response claps and chants, we layered double time and syncopated hand motions over some marching in place. I was impressed that most of the children got it. But then again, when 1000 people are stomping out the beat it’d difficult to not catch some of the rhythm.

This sense of multi-layered rhythm also animated the final piece, Chicago, also choreographed by Jakari Sherman. The beats – many sounded like hip-hop hooks – were immediately engrossing. I found myself on the edge of my seat waiting to see how the rhythms, once established, would play out across the performers’ bodies or be enacted across the ensemble. At times it was overwhelming to take in everything happening on stage. Folk traditions like Hambone rhythms and Jody calls melded seamlessly with popular moves (Did I just see a throwback to the MC Hammer spin from the You Can’t Touch This video?) Hand-clap games that one would encounter in a playground developed into complex layers of percussion. And certainly in Stepping, described by author Elizabeth C. Fine as a “dance of ritual and cultural identity”, one can trace the embedded African modes of communication and movement through this African-American mode of expression. It was all in there, beautiful as it unfolded moment to moment, but most of all, Stepping as performed by Step Afrika! is a dance of utter exuberance and joy. 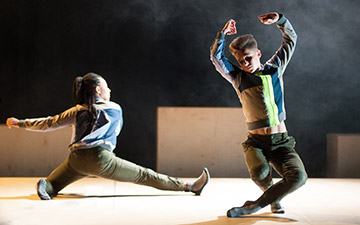 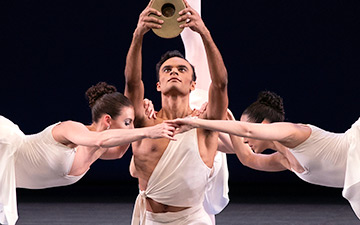