There have been many galas in honour of Maya Plisetskaya, celebrating milestone birthdays and her death, at the age of 89, in May last year. Andris Liepa has directed several of them: two in London – the latest at the Coliseum and an earlier one, ten years ago, for her 80th – as well as a Bolshoi gala last November. The Mariinsky Ballet recently gave a Plisetskaya gala in New York In February, reviewed by Marina Harss.

Plisetskaya is proclaimed a Russian icon, as if to compensate for the harsh treatment she received from the Soviet system (she wasn’t allowed to tour abroad for 16 years in the 1940s and 1950s) and for her alienation from Yuri Grigorovich’s regime at the Bolshoi Ballet. She defied all attempts to confine her, carrying on performing internationally into her 70s. Famous for her Dying Swan, she would die twice, giving an encore by popular demand. There’s a YouTube clip of her Dying Swan at the age of 61:

Ideally, a gala in her honour should feature only roles that she danced and choreographers she admired or commissioned. This latest London one had to make do with whatever the invited participants could provide. To the credit of the organisers, Liepa and Olga Balakleets of Ensemble Productions, the promised starry names turned up and danced magnificently. The relevance, however, of some of their contributions to Plisetskaya’s memory was hard to discern.

We were spared a Dying Swan, but deprived of any of her roles from Raymonda, The Fountain of Bakhchisarai, The Stone Flower or Legend of Love. Instead, we had a pas de deux from Giselle, which she never danced, and a Sleeping Beauty grand pas in perverse choreography by Nacho Duato, crazily credited to Petipa. Instead of Maurice Béjart’s account of Ravel’s Bolero (performed on a table-top by Plisetskaya), Faroukh Ruzimatov camped through a solo by Nikolai Androsov. None was an improvement of the original.

The only selection directly associated with Plisetskaya was an excerpt from Carmen Suite, commissioned by her from Alberto Alonso, with music by her husband, Rodion Shchedrin, based on Bizet’s opera. Tamara Rojo danced the role of seductive Carmen, with Isaac Hernandez as her anguished lover, Don José. They were both riveting, dancing in front of a projected image of a bull’s head with a frieze of stick figures. The projections were designed by Nina Kobiashvili: swiftly substituted to suit each item, they enabled the programme to run without a hitch.

As always in galas, emotional pas de deux taken out of context were less successful than showcase numbers. That said, Sarah Lamb and Federico Bonnelli in the balcony scene from Kenneth MacMillan’s Romeo and Juliet were very moving – far more so than Polina Semionova and Jason Reilly in the final pas de deux from John Cranko’s Onegin, in which they looked absurdly melodramatic. The Spartacus excerpts made no sense unless you knew (unlike the programme note) that formidable Maria Alexandrova and handsome Vladislav Lantratov were the villains of the ballet, not the heroic, doomed couple.

The Giselle pas de deux provided a glimpse of the Mariinsky’s Romantic style, danced by Kristina Shapran and Xander Parish. He looked elegantly noble, but like his partner has an unyielding torso. Shapran is physically unsuited for Giselle, without a continuous line of neck, shoulders and arms. Exaggerated extensions and a very long tutu made her seem unwieldy.

A rare treat was The Talisman gala number, choreographed for the Kirov Ballet in 1955 by Pyotr Gusev, to music by the usual suspects, Drigo and Pugni. It was danced with merry abandon by Ekaterina Osmolkina and Kimin Kim from the Mariinsky Ballet, both making the most of every Soviet virtuoso cliché. The conventions were wittily sent up in a pas de deux from Alexei Ratmansky’s reworking of The Bright Stream for the Bolshoi. Ekaterina Krysanova and Andrei Merkuriev were charming (and expert), egging each other on: ‘It’s your turn – go for it; I’ll do the fouettés, you do the manège.’

Just as charming were Daria Klimentova and Vadim Muntagirov in the Moszkowski Waltz, choreographed by Vassily Vainonen to show off spectacular leaps and lifts. More familiar crowd-pleasers were the Black Swan pas de deux (Liudmila Konovalova and Matthew Golding), the Corsaire gala version (Maria Kochetkova and Daniil Simkin) and the Don Quixote final pas de deux (Kirstina Kretova and Ivan Vasiliev). All were expertly executed, with Vasiliev charging around the stage like an acrobatic Spanish bull, grinning broadly.

He and Kretova performed for the audience with aplomb, unlike the inward-looking modern ballet couples in duets that had nothing to do with Plisetskaya. In their own ways, they were as cliché-ridden as the gala numbers. Russell Maliphant was responsible for Spiral Twist, a gloomy duo that closely resembled an ice-skating routine for a tall man (Marlon Dino) and small woman (Lucia Lacarra), both with the Bavarian State Ballet. She had to look meaningful as she wound herself over him or was swung around him on the floor to woozy music by Max Richter.

Benjamin Millepied contributed a recent duet, Together Alone, for Aurélie Dupont and Hervé Moreau as a pair in a troubled relationship, to repetitive piano music by Philip Glass. They wore jeans and T-shirts to show how non-balletic they were. She was held, yanked, swirled, dragged and eventually reconciled (or not, in a meaningful way) with her partner. The duet was made to show off Dupont’s maturity as an expressive étoile in her final year with the Paris Opera Ballet. She has since replaced Millepied as director of the company. Lovely to see her on stage again, but it’s a pretentious duet.

So is Christopher Wheeldon’s After the Rain pas de deux to Arvo Part’s overfamiliar piano music. Marianela Nunez and Thiago Soares danced it sincerely but its impact palls once you become all too aware of the artistic-gymnastics positions the woman has to assume – signifying what, exactly?

Every gala needs a revelation, and this one was provided by Sergio Bernal, a Spanish dancer who dominated the stage in an imperious farruca solo from Antonio’s flamenco version of The Three Cornered Hat. Plisetskaya, who directed the National Ballet of Spain from 1987-1990, had a passion for flamenco dance. Bernal would have delighted her with his flamboyant cape work, fast footwork and male glamour.

Finally, praise for the English National Ballet’s orchestra under Valery Ovsyanikov. They accomplished a wide array of composers, from Adam to Philip Glass, as well as accommodating the requirements of an international galaxy of leading dancers. 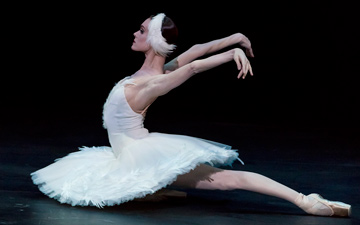