Over the last 18 months, under the direction of its new leader, Ángel Corella, the Pennsylvania Ballet has gone through a major revamp. New administration, new ballet masters, and lots of new dancers. Corella is determined to make his mark on the 50-year-old company, which was founded by a friend of George Balanchine’s (Barbara Weisberger), and until recently was led by a former company dancer, Roy Kaiser.

For its first visit to New York since the change, Corella chose a program of recent works by three choreographers, all of whom have close relationships with the company: Matthew Neenan, Trey McIntyre and Nicolo Fonte. All were performed to recorded music and fit well within the moderate dimensions of the Joyce Theater. But what did they tell us about the company? Mainly, that Corella’s current crop of dancers is strong and adaptable, and that he seems to favor shorter dancers with very clean footwork and strong technique who, when given the opportunity, can really move.

This quality came through particularly strongly in the second work, Trey McIntyre’s The Accidental (2014), set to folksy, soulful songs by Patrick Watson. McIntyre has a rare ability to draw very pure, very honest performances from his dancers. In his hands, they give the impression that they are revealing much about themselves. His steps flow from the music, but also from the feeling behind the music – it stirs something in him, and through him, in them. (His musical choices feel extremely personal.) The movement he creates is expansive, fluid, full of twists and turns, but also textured and expressive. When the dancers look at each other, you feel you are almost hearing them speak. The theme of McIntyre’s dances is often the same: the relations of individuals within a group. The awkwardness and joy being together, the vulnerability and beauty of solitude. He ends The Accidental with a solo for a male dancer, performed here by Craig Wasserman. Full of starts and stops, falls, slides and foldings, it unspools like a monologue, an expression of the performers’ deepest thoughts and vulnerability.

In comparison, Matthew Neenan’s Keep felt rather opaque. Neenan’s works often contain hard-to-grasp shreds of narrative, and here, too, there were hints, small gestures that seemed to imply something hidden beneath the surface (a covered face, a sharp push). But in Keep, Neenan doesn’t make anything of these gestures; they feel empty, put on for show. Over-busy, sometimes awkward – as when, in a repeated motif, the women hook their legs over the men’s necks – and lacking in accents or sustained rhythmic impulse, the choreography feels simply unmoored. And it barely skims the surface of the music – sections from two lush, romantic string quartets, by Alexander Borodin and Nikolai Remsky-Korsakov. (The music was terribly over-amplified, which didn’t help.) Even so, Jermel Johnson was exciting in a fast section of crisp petit allegro footwork. The piece ends with a woman spinning round and round on a stool, but why?

In contrast, Grace Action, by Nicolo Fonte, was a study in elegant patterns, echoing the repetitive figures in a series of pieces by Philip Glass. Canons, fugues, ricocheting motifs rippled across the stage. It is a pleasing work, the kind that invites the viewer to admire the beauty of the dancers’ port de bras, the formality of structure, the power and purity of the technique that underpins the movement. Fonte pushes the dancers – the legs are raised sky-high, the partnering is tricky, and, during turns, the upper body often undulates or tilts off-balance. (Mayara Pineiro was especially impressive in these turns.) A simple motif of an arm slowly lifted and lowered in opposition to the head – as the arm went up, the head nodded down – was the anchor, like the theme in a theme and variations. Throughout the piece, a bank of lights shifted, framing the choreography in cross-hatched or pooling patterns.

All in all, a tasteful program that makes one want to see more. But works like Keep and Grace Action don’t tell us much about what makes these dancers tick. The Accidental, though, is a real jewel, for the company and for the audience. Perhaps Corella can lure Mr. McIntyre back to Philadelphia sometime soon. 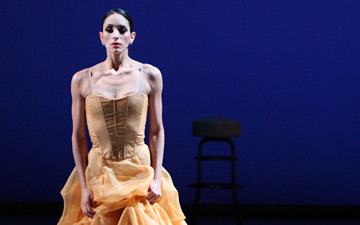