The vital decision any choreographer has to make when creating a three-act ballet for a major company is whether the chosen subject warrants using a large-scale corps de ballet. If the story is an intimate one, all those surplus, salaried dancers are going to look like padding.

Liam Scarlett treats Mary Shelley’s 1818 gothic horror novel, Frankenstein, as essentially a domestic drama.  Its core is Victor Frankenstein’s desire to defy death by creating a being who then brings about the death of his creator and all his loved ones. The ballet does not deal with the 18th century society in which this takes place: an era of questioning religious belief in man’s place in the world, of scientific experimentation and ethical debate.

Instead, the female corps de ballet represent servants, whores and party guests, with some of the men cast as Victor’s fellow medical students. Period authenticity is ignored for below-stairs staff to dance with upstairs family members, and female scrubbers with anatomy pupils. Scarlett keeps the corps busy in well-crafted ensemble numbers, but they hardly advance the plot.

The story proceeds painstakingly from the start. We see little Victor grow up alongside his adopted sister, Elizabeth, until they fall in love just before he is due to leave for university. The presents he is given are significant: a red notebook from his father and a locket from his mother. He (Federico Bonelli ) and Elizabeth (Laura Morera) dance an awakening love pas de deux (shades of Romeo and Juliet) where the focus is all on her in ecstatic lifts. It will be some time before we learn anything about Victor’s dance personality.

Heavily pregnant mother (Christina Arestis) collapses and dies in childbirth. Everyone is distraught, including the housekeeper’s daughter, Justine (Meaghan Grace Hinkis), who will be put in charge of the motherless baby boy. Victor’s frozen grief at his mother’s memorial stone in the cemetery covers a scene change to the spectacular anatomy theatre at Ingolstadt University.

So far, Lowell Liebermann’s commissioned score has accompanied the scenes of exegesis serviceably. Now the composer has the chance to be expressive in the presence of a dissected corpse and uneasily irreverent students with an overbearing professor (Thomas Whitehead). He is reminiscent of the Gaoler in Manon, prepared to have his way with the downtrodden scrubbers in his charge. John Macfarlane’s panelled set is magnificent, complete with outlandish electrical devices as well as anatomical studies and skeletons. A front cloth of a ghostly skull serves as a memento mori before the start of each act.

Among the students is a gauche fellow, Henry Clerval (Alexander Campbell), on whom Victor takes pity and makes his friend. The ballet is full of misfits: Victor, Henry, Justine, Elizabeth, who was cast out in a storm as a child before being taken in by the Frankenstein family. And of course the Creature, for whom Victor shows no compassion at all.

Victor has at last been given a solo, on his own in the anatomy theatre, to express his confused state in yearning arabesques and lunges. The printed synopsis tells us he is thinking of his mother and of life and death as he clutches the locket she gave him. He turns into Dr Coppélius as he consults his notebook and attempts to give life to an inanimate dummy. An infernal galvanising device descends, with bangs, crashes and climactic music as the re-assembled corpse (Steven McRae) comes to life. Crudely stitched together, he appals Victor.  The Creature flees, clutching Victor’s coat, and Act I ends abruptly after 50 minutes.

It’s far too long, with too much time given to the back-story and not enough to the aftermath of the monster’s creation. Why is Victor so horrified by what he has done? Why does he feel guilty? What becomes of the Creature he rejected during the seven years between Act I and II? All we know is that he has been briefly mugged in the dark at the start of Act II. Audience members not seated at the left of the auditorium will be able to see him lurking during the act’s opening scenes. If you’re on the left, you won’t have a clue.

The Creature watches young William, Victor’s little brother, being taught courteous behaviour by his nanny, Justine, and learns to copy it himself. He also sees Elizabeth with Victor, as she tries to comfort him. Victor is passive (though he can still partner her in low Ashtonian lifts); only she and the romantic music reveal that they are still in love. When they go into the Frankenstein mansion, the Creature emerges for his sole chance to reveal who he really is.

With McRae as the first-cast Creature, Scarlett has chosen to show him as a child in an adult’s body – an athlete’s body, albeit garishly scarred. He is not a Hammer Horror monstrosity, and his musical theme is plaintively beautiful. He doesn’t move awkwardly: his limbs belong to him, though they throw strange shadows. His face is made up to appear disfigured, which means that McRae has to rely on body language to convey complicated feelings: loneliness, longing for love, resentment of rejection, animal cunning, a burning desire for revenge.  McRae can’t encompass all these in movement alone, nor can he elicit pity for the Creature’s hurt. He is oddly invulnerable.

Before the Creature finally confronts Victor for the first time, he plays Blind Man’s Buff with William at the boy’s birthday party. The partying guests, children and servants have unaccountably gone elsewhere. Guillem Cabrera Espinach, a White Lodge pupil, is very appealing as William, dancing naively alongside his new friend. When the blindfold comes off, William recoils, opens his mouth to scream and is silenced forever by the Creature. Liebermann can’t resist Psycho echoes in the score at this point. Everyone is doomed.

Justine is accused of the murder, incriminated by the Creature.  She is gratuitously manhandled by the party guests before being taken off to be hanged. The Creature returns with the boy’s red coat to reproach Victor for abandoning him, arching his body in angry arabesques. Because McRae is smaller than Bonelli, he doesn’t appear intimidating. According to the synopsis, he asks for a female companion and threatens vengeance when refused. Ballet can’t cope with so much information.

Act III opens with a tumultuous backdrop, a vast white staircase and a ballroom scene. Libermann’s music references Prokofiev’s Cinderella and Campbell’s Henry is evidently the bouncy jester at Victor and Elizabeth’s wedding. Mingling unseen (except by Victor) among the waltzing guests is the Creature, the Phantom of the Ballet. Henry, charming though Campbell is as the redeemed misfit, is soon lifeless, along with Frankenstein senior (Bennet Gartside in a thankless role).

That leaves Elizabeth, partnered to death by the Creature as she fights for life. Victor witnesses the killing and is caught up in a pas de deux with his murderous alter ego, his own creation. He shoots himself and the Creature cradles his body in a perverse pieta. Presumably they are consumed by the inferno on the backdrop – either the Frankenstein mansion burning down or the flames of Hell, after all.

Scarlett has given birth to his own creation without giving it a beating heart. He says in interviews that his Frankenstein is about love – but whose? Victor Frankenstein is a cipher, frozen by grief and guilt, accepting no responsibility for his ‘monster’ until the end. Elizabeth, who started as a rejected orphan, is warm and loving in Morera’s tender portrayal, but the story isn’t about her. The Creature’s innate capacity for love is never explored. He turns up craving acceptance and is savage when rejected; it’s hard to feel empathy towards him or his creator.

The leading roles are danced with great commitment and the supporting ones are well fleshed out: impetuous Justine and her watchful mother (Elizabeth McGorian), William, and Henry Clerval. They stand out in ensemble routines that could have come from many another ballet featuring peasants, courtiers, gentlefolk and harlots. Frankenstein is surprisingly conventional in its structure, taking little for granted in its story-telling. Memories are illustrated by the reappearance of characters as living ghosts. Props are wielded to explain motivations. Nonetheless, without the detailed synopsis as a guide, many nuances would remain obscure.

Scarlett has played safe with his first three-act ballet, taking no risks to push the genre further than David Bintley or David Nixon have done with their companies. Incidentally, in spite of publicity claims that Scarlett is the youngest choreographer (at 30) ever to have been commissioned to create a full-length work to new music for the Royal Ballet, John Cranko was younger when he choreographed The Prince of the Pagodas in 1957.  That wasn’t a great success. Nor is Frankenstein in its present form, thinly stretched over 125 minutes with two long intervals. Edited to two acts, with more about the Creature and less about the Frankenstein family, it might just work, thanks to its splendid designs. 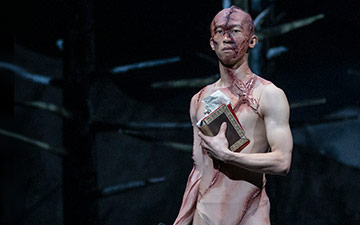 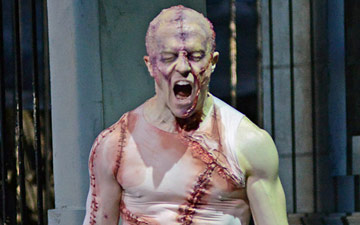 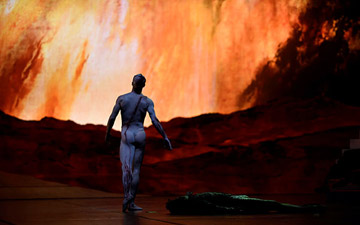