Swan Lake in the 21st century is an inevitable mishmash. The equation of most productions is a combined sum of the late 19th century choreography by Marius Petipa and Lev Ivanov, plus the vision of the artistic director of the performing troupe. Often this means additions and subtractions and migrations of scenes, music, and choreography and occasional play with the setting and time period. Some directors stick to the Petipa/Ivanov road map, others detour, the latter is frequently the case with ABT’s production, often not for the better.

ABT’s current production, staged by Kevin McKenzie and dating from 2000, was largely carried on Friday night by its principal dancers, Gillian Murphy and Cory Stearns, both of whom gave outstanding, three-dimensional, dramatically compelling performances. Alexandre Hammoudi was right there with them as a highly magnetic, hot blooded von Rothbart. The production itself, which suffers some large loss of Ivanov’s traditional choreography, however did not rise to meet them.

The ballet opens with a prologue, wherein one sees Odette’s seduction by von Rothbart. In a way, it points out the plot’s creepy inversion of the Leda and the Swan myth, and it is equally unsettling. After we see Odette (as a human) swoon for the smooth von Rothbart, she vanishes and we’re left with a diabolical villain hugging a stuffed swan. It is a brief, creepy episode and not out of line with the already bizarre plot but, the stuffed swan seems a bit much.

The swans in the second and third acts look anemic, not in their capability but in their vision onstage, which lacks presence. The swans appeared to lack enough substantial, cohesive formal structures to communicate von Rothbart’s en masse sorcery and the swans’ collective helplessness (in most libretto’s the swans are real women under the same spell as Odette, she is their queen; ABT program notes fail to specify). The stage seemed underpopulated by feathers and lacked the sense of density which can be so mesmerizing in this ballet (as it can also be in Giselle). Von Rothbart’s demise is a pitiful creep towards death: he trudges through the white swans, almost invisible, before his body peels over his knotted tree outcrop upstage left. There is little sense of his struggle or devastation, nay rage, at his failure. His costume, different from the usual befeathered owl getup, had potential – more of a “Night on Bald Mountain” demon crossed with a William Blake grotesque – a powerful hulking figure which seemed to go to waste due to poor staging.

That said, McKenzie gives von Rothbart a fabulous third act, playing him up as the ultimate seducer, a captivating orchestrator. The seducer who bewitched Odette in the prologue returns to ply his sneaky ways on an entire ballroom, and Hammoudi is a killer at this. His stride is virile but lithe, his shoulders contain all his power, his flare with a cape is mesmerizing and the thigh high purple suede boots don’t hurt either. The visiting princesses faint for him and the room is all atwitter. His spell is cast, although there remain some awkward lags in the choreography.

Murphy is a sensual Odette, something made all the more effective by Stearns’ tenderness. During the famous lakeside pas de deux, the two were believably besotted. Stearns strokes her arms, bewitched by her duality, while she finds luscious ways to lean in and respond to his touch. Stearns is a great male dancer but he is an equally capable actor who lays bare the progression of Siegfried’s character, which is in line with the story but not always so visible to the audience. His act one prince is a playboy, a carefree flirt who takes privilege for granted. Mid-act, after his mother’s lecture on marriage, the commitment phobe comes out and Siegfried gets his signature existential solo, which Stearns performs with a strong sense of helplessness. After seeing Odette for the first time in act two, the commitment phobe is transformed into a romantic, and by the fourth act he is ready to die for love. Stearns navigates these changes with feeling and passion.

Murphy’s change, under von Rothbart’s spell, from human to swan was chilling in its robotic response to the villain’s whims. Her balance of the avian and human is perfect, and perhaps what is best about a seasoned performer in this role is that nothing feels phoned in. Her Odile is all craft and cunning, and she owns it utterly, without a hint of trepidation.

The corps was uneven across all acts, especially in musicality (the four cygnets were sadly not together), but there were some standout solos. Christine Shevchenko and Devon Teuscher both gave bright, sprightly, highly musical performances in the first act pas de trois variations with Benno – danced by Calvin Royal III. Royal’s earnestness is contagious, and his hyperactive jumps are lean and light, though he still needs to build up more strength and finesse (particularly landing in fifth). The female corps would have looked (and danced) better at the opening birthday party if they weren’t drowning in medieval drapes – their footwork was nearly invisible, and a few skirts caught. The global divertissements in the third act were fine, though the Spanish men, Alexei Agoudine and Patrick Frenette gave it the most oomph.

ABT is known for being America’s definitive story ballet troupe, and while not god-awful, this particular production lacks symmetry and scope. The ending, has Siegfried and Odette embracing inside the rising sun, bleached out and barely visible. A chunk of the audience missed this, thinking the entire thing ended abruptly with the double suicide alone, summing up this production’s biggest flaw, its muddiness. 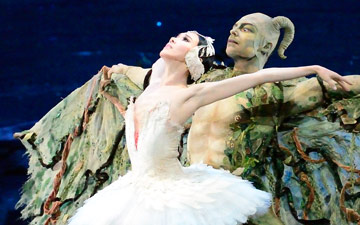