The San Francisco Bay Area is home to literally hundreds of small, independent dance companies, mostly postmodern or performance-art in style. SFDanceworks shifted the balance toward contemporary ballet with its inaugural season opener, performed at ODC Theater on Thursday, June 23. Helmed by SF Ballet soloist James Sofranko, the repertory company started off with excellent dancers and an artistic point of view that one hopes will become clearer over time.

Sofranko built the company’s foundation over the past two years, socking away a nest egg through fiscal sponsorships and advance fundraising. It has surely helped that Sofranko, who has danced with the Ballet since 2000, is among its most publicly beloved members, and one of its most socially engaged; the season was co-produced by ODC, individual works on the bill boasted private sponsors and all three nights sold out in advance.

All the dancers are technically gifted and, more importantly, wonderfully musical, qualities called upon by the five works on the bill. In Lar Lubovitch’s 1985 classic Concerto Six Twenty-two, set to Mozart’s clarinet score, Del Cuore and Anderson were marvelous in plotless, yet richly evocative, adagio movement. The opening moments recall Balanchine in arms that link and intertwine in circles and arcs; throughout, the men lean and touch, lift and leap, watch each other’s solos and mirror one another in a relationship of exquisite tenderness.

Lickety-Split was Alejandro Cerrudo’s first creation for Hubbard Street, in 2006, with nonsense folk music by Davendra Banhart, this generation’s Tiny Tim. The 20-minute work shapes a lovely contemporary architecture out of sweeping touches, seamless lifts, deep pliés and pencil turns. Garrett shared graceful electricity with Genshaft, whose lyricism is at once commanding and spontaneous; in an up-tempo pairing, Zivolich-Adams’ arabesque landed around Needham-Wood’s neck, and he stood to lift her with seamless strength. Neumann and Del Cuore brought the work to its peak with a balance of energy, interpretation and mutual understanding that every choreographer dreams of.

Three emerging choreographers contributed to the bill. In the West Coast premiere of Penny Saunders’s Joe & Ida, a co-commission with Michigan’s Grand Rapids Ballet, three couples (all but Del Cuore) in street clothes mixed and mingled in modern undulations, floor rolls and slides, and even mock fencing, which traded with plucky partnering and the barest hint of tango – if it sounds achingly arch, it wasn’t; Saunders sketched rather than illustrated the music, a jukebox of folksy tunes, pizzicato violin, waltzes and tinkling 1920s-style piano.

Genshaft ventured into dance theatre with Portrait, a solo inspired by the life of writer George Sand and set to Mason Anders’ sound score of Max Richter and Franz Liszt with voiceovers and sound effects. Olivia Ting’s dynamic floor projections of flowerbeds, scrolls and script defined Neumann’s performance space; the sophisticated effect and her lush dancing did not quite counter the panniers-to-pants literalism of the work. Zivolich-Adams debuted Sofranko’s solo Z, which was a fun and frothy romp to drum-and-bass jazz by Bob Crosby, rather than the artistic gauntlet one expects from an auteur’s signature outing.

With this first season, Sofranko has proved himself a good curator of choreographic and dance talent, with a preference for loveliness in movement and movers. Upcoming seasons of SFDanceworks will reveal how his point of view matures in the crowded waters of San Francisco dance. 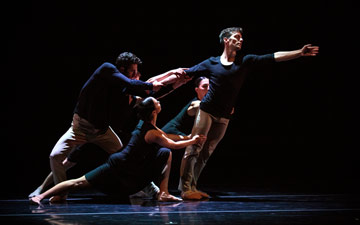 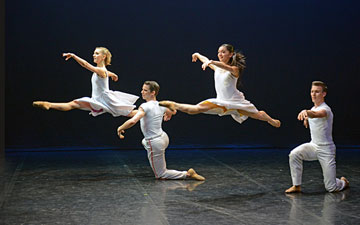 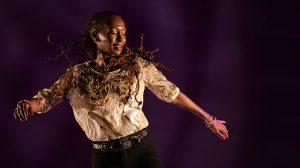