Two interesting impulses have been evident in the modern and post-modern dance scene in New York of late. One is the repurposing of dance for museum spaces. It’s not hard to see the allure for museums: it creates an “event,” a lure for museum-goers. Meanwhile, it reframes dance and makes it available to a new audience. In many ways it’s a boon for both, though it does have a slightly deadening effect; people come and go; the dancing becomes a side show.

The other impulse, more relevant to the Stephen Petronio Company and its “Bloodlines” series, stems from a different kind of reframing: the bringing back of works from an earlier era in modern and post-modern dance. Petronio describes his series as an effort to “shift dance history from the books into the body.” To breathe new life into works that might otherwise remain fixed in time, on the page or in scratchy videos.

The company’s current season at the Joyce includes works by Yvonne Rainer, Steve Paxton and Anna Halprin. The evening opens with a suite of works by the post-modernist Yvonne Rainer, a founding member of Judson Dance Theater and a choreographer whose work attempted to strip dance of many of its most glamorous features. In her famous manifesto, she wrote, “NO to spectacle no to virtuosity no to transformations and magic and make-believe.” A radical idea at the time, akin the silent music of John Cage’s 4’33”.

The resulting pieces, three of which were performed at the Joyce (Diagonal, Trio With Flags, Chair-Pillow) are doggedly pedestrian. In Diagonal (1963), dancers give each other shorthand instructions, resulting in actions like walking, walking while bending at the waist, walking on tiptoes while holding arms up and blowing air out of the mouth. In Trio A With Flags (1966/1970), three dancers bravely don American flags and nothing else as they walk, kneel, bobble or do leg circles. Are the flags political? Yes and no. The Chambers Brothers’ rendition of the R&B song “In the Midnight Hour” plays, but there’s no connection between the movement and the music. In Chair-Pillow (1969), a possible precursor to Anne Teresa de Keersmaeker’s Rosas Danst Rosas – but without the attitude – the dancers sit on chairs, or stand up, or drop pillows on the floor. Again, a rock and roll song, Ike and Tina Turner’s “River Deep, Mountain High,” plays in the background. The stony-faced dancers seem to ignore it.

As my descriptions suggest, these pieces are frustrating to watch. You quickly figure out the logic; the movement itself is vehemently un-spectacular. They go on for longer than one would like. What made them so mesmerizing in the sixties? Probably the radical rupture – from the seriousness of modern dance – and freedom they implied. And surely the personalities of the original performers. This was a generation of iconoclasts and tricksters, theatrical despite their protestations to the contrary. Dutifully performed by the young dancers of Petronio’s company, the pieces have little to sustain one’s interest.

Luckily, the Paxton solo, an excerpt from his Goldberg Variations, came next, washing away the doldrums. Goldberg consists a series of improvisations from the eighties, set to sections of Glenn Gould’s 1982 recording of the Bach cycle. Paxton’s response to the music was never the same, but he allowed himself to be filmed in 1992; that is the source for the version performed by the Petronio dancer Nicholas Sciscione. It is an extraordinary piece, danced here with extraordinary focus and introspection. Shirtless, we see the muscles of Sciscione’s back and shoulders twitch and ripple as the notes swirl, scoop, and ping. His body actually appears to be activated by the music, as if it had no independent volition. He creates an uncanny, and emotional illusion. The movements seem largely propelled from the interior of the body, as if the music resided there. It pushes and pulls Sciscione into shapes and phrases, releasing him only during the pauses between each piece. By the end he is exhausted; the effort and concentration feel epic.

Goldberg was followed by The Courtesan and the Crone, a somewhat trite reflection on aging by Anna Halprin, famous for her long-standing Dancers Workshops in California, attended by everyone from Meredith Monk to Trisha Brown. This was performed by Petronio himself, wearing a gold-colored cloak and Venetian mask. The comely temptress disrobes, revealing the supposedly hideous aging body beneath the artifice. As performed by Petronio, there is the added element of drag, a slight twist that doesn’t change the portrait’s basic nature.

Only the closing piece, Untitled Touch, was by Petronio. It’s a pleasing, if not too challenging piece, set to an atmospheric sound score by Son Lux with a strong beat. The dancers’ movements are activated by touch; with their hands and fingers they create fields of energy, or respond to it, falling, supporting, pulling each other across the stage. The movement is fluid and free, reminiscent of Trisha Brown’s; or sharp and muscular, like Cunningham’s. Dancers appear and disappear from the wings, almost at random. Every so often they pause in sculptural formations. Petronio reserves the most spectacular passage – a grappling, muscular duet for two men, Nicholas Sciscione and Joshua Tuason – for the end. The duet, performed in gray briefs, is monumental, like a battle between titans, full of dangerous-looking lifts and whipping movements, but dappled with moments of tenderness.

In this explosion of movement, we see what distinguishes Petronio from his masters: a lush emotionalism, a love of skin-on-skin contact and its implications in movement. It’s a different era, but also a question of temperament. Petronio’s predecessors were stripping dance of its emotional overlay and monumentality; Petronio revels in it. 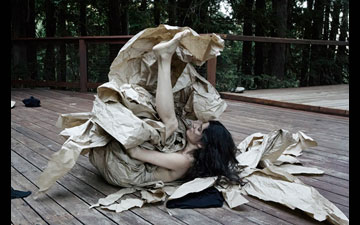 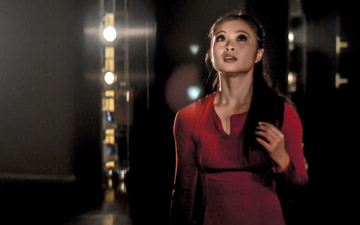 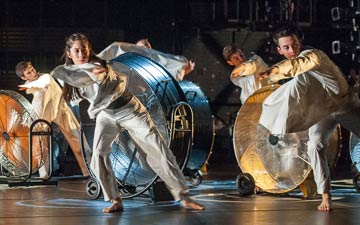