Before the opening night of Birmingham Royal Ballet’s triple bill at Sadler’s Wells, its director, David Bintley, proudly announced the start of its joint project with the Wells theatre, Ballet Now. The aim is to enable the creation of ten new one-act ballets for the company over the next five years. The initiative sounds very promising. The recipients of the first three commissions, however, don’t really fit the promotional material.

The opportunity is supposedly for choreographers, composers and designers to create their first dance piece for a large company on a large stage.  Yet George Williamson, Juanjo Arqués and Didy Veldman are all experienced choreographers who have already worked with large as well as small companies. Still, they will have the benefit of  ‘an individual mentoring plan, a budget for their work and a level of creative support that they will not previously have experienced’ – a sweeping statement.

BRB has already supported Ruth Brill, a dancer and tyro choreographer with the company, for the development of her ballet Arcadia. It started out as a six-minute sketch and was then expanded into a work for a small-scale tour; it reached the large Birmingham Hippodrome stage in June this year and has now been given its London premiere. Frankly, this is a degree of exposure that the immature 26-minute result doesn’t merit.

Its only justification is its ravishing design, by art student Atena Ameri. A cut-out lattice of trees forms a dramatic background for a pastoral idyll of nymphs, peasants and the demi-god Pan. The choice of an ancient Greek myth or two seems an odd subject for a young choreographer of today. The suggestion came from Bintley, who proposed John Harle’s Arcadia trio as an inspiration for Brill. (Harle’s score is dedicated to John Craxton, the painter who designed Ashton’s Daphnis and Chloe in 1951.)

Brill has concocted a story with a message. Animalistic Pan, half-goat, half-man, has to learn from three nymphs and a moon goddess how to control his disruptive urges. According to the synopsis, he must respect the constituents of Arcadia in order to become the leader of a harmonious society. So, no more unwanted sexual advances.

Brandon Lawrence as Pan makes the most of his role as a semi-feral creature akin to Nijinsky’s Faun. Although he’s at the mercy of his goatish instincts, he expresses himself through classical ballet steps, unlike the Faun. He flexes his torso and tussles with his elbows, trying to suppress his sensual cravings. The three nymphs he fancies are pretty, bland and undifferentiated, apart from the colours of their pleated dresses.

Harle has orchestrated and extended his score in collaboration with Brill, and plays the saxophone as a member of the orchestra. The music, with its combination of jazz, Greek folk melodies and middle- eastern references, offers tonal contrasts and intricate rhythms that the choreography largely fails to take up.

Rejected by the nymphs and folk-dancing villagers, Pan is consoled and enlightened by Selene, goddess of the moon (serene Céline Gittens).  He copies the crescent shape she makes with upraised arms – a motif that reappears in the jubilant finale, as nymphs and villagers join Pan in a circling Greek knees-up. A full moon descends behind the silhouetted screen of trees.

Brill may have ticked the right boxes for a beginner’s old-fashioned narrative ballet (with the advantage of imaginative collaborators), but the result is more suited to a school concert matinee than a professional staging. Let’s hope the Ballet Now initiative proves more challenging for BRB’s future repertoire.

Bintley commissioned the established choreographer Michael Corder in 2008 to create a new account of Le Baiser de la fée for a programme of Stravinsky ballets. Seeing it in London shortly after Scottish Ballet’s reconstruction of Kenneth MacMillan’s 1960 version brought out the contrast between the two approaches.

The scenario for both, determined by Stravinsky in 1928, is much the same. The Ice Fairy kisses a baby whose mother dies in a storm; 20 years later, when the young man is about to be married, the Fairy claims him for her own. Corder ignores Stravinsky’s proposal of an allegory – the lethal kiss being that of a Muse giving an artist immortality at the price of happiness.

Where MacMillan made the Fairy enticing, promising the young man more than his fiançée could offer, Corder’s Fairy (Jenna Roberts) is a killer. Her kiss is a curse, like evil Carabosse’s, The baby will grow up into a handsome suitor, and then he’ll die. Her domain is bleak and hostile, her atttendants murderous. They dance the baby’s mother to death at the start and offer up the boy’s lifeless body at the end.

The bride-to-be (Momoko Hirata) is doomed to lose her lover (Lachlan Monaghan). She and her six bridesmaids are dressed in virginal white, while the celebrating locals wear sombre clothes; perhaps lives are easily lost in the forest surrounding their village. (Yet more trees as a backdrop, this time by John Macfarlane.) Corder sets everyone dancing in a ballabile of speedy steps, with a delightful solo for the bride. His choreography picks up references to Tchaikovsky’s music, but bypasses Stravinsky’s reminder of his own Petrushka folk dances.

No gypsy temptress arrives to bewilder the young man (the Fairy in disguise in Stravinsky’s original scenario). Instead, the Fairy conceals herself in a glittering bridal veil before claiming him as her prey. He is passive, she apparently irresistible, though she’s not as erotically arousing as MacMillan’s Fairy. She’s simply imperious, riding on his shoulders. It’s hard to feel much sympathy for the lost bride, who’d be better off with a nice villager back home.

The final tableau echoes the opening scene in which the Fairy first implanted her kiss on the boy. It’s beautiful but uninvolving because the story has no tension and the characters are underdeveloped.  Corder has supplied plenty of diverting steps, but Stravinsky’s scenario has defeated him, as it did MacMillan.

Bintley’s ‘Still Life’ at the Penguin Café saves a dispiriting evening by providing nimble demi-character dancing with a timely message, first delivered nearly 20 years ago. When he and composer Simon Jeffes devised the sequence of scenes for the Royal Ballet, few members of the general public were as concerned as we are now about the survival of endangered species. Bintley chose the vulnerable creatures for each vignette almost at random, to suit the musical numbers he and Jeffes selected from the Penguin Café Orchestra’s albums. Their quirky, catchy orchestration initially proved a challenge, to which the Royal Ballet Sinfonia rises with glee.

So does the present cast of BRB’s dancers. They might be tricky to identify beneath their animal (or insect) masks, but they all re-appear as themselves at the very end, safe, we hope, in a precarious ark. Tyrone Singleton was magnificent as the Southern Cape Zebra, Tzu-Chao Chou inexhaustible as the Texas Kangaroo Rat, and Maureya Lebowitz slinkily glamorous as the Utah Longhorn Ram, with Ian Mackay dapper as her Strictly ballroom partner. It’s amazing how dancers’ personalities surmount all-enveloping costumes and masks. Ruth Brill remained unrevealed as the extinct Great Auk, left out of the ark – but she’ll survive her first main-stage commission as a choreographer for Arcadia and go on to create better things. 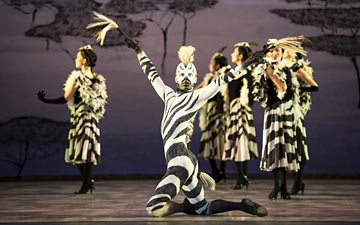