Paris’s summer festival of dance, Les Etés de la danse, now in its 14th year, has moved to a concert venue on an island in the Seine. The extraordinary building, inaugurated in 2017, houses two performance spaces: the largest, which can seat 1,150 people, had been reduced in capacity for the two-week festival. Dance-lovers and summer tourists have not been flocking en masse to the cultural outpost in the western suburbs of Paris, once the site of the Renault factory. A pity, because the festival programme includes five ballet companies, mostly American, performing eight works by Jerome Robbins, in celebration of the centenary of his birth.

New York City Ballet, which has been presenting its own Robbins tribute in its home theatre, sent a select group to perform Dances at a Gathering and A Suite of Dances (which requires just a soloist). The Joffrey Ballet came in force for Glass Pieces and Interplay in the opening programme. Programme 2 involves Miami City Ballet, Perm Opera Ballet and Pacific North West Ballet, which then continues the festival with its own season of works by contemporary choreographers.

Dances at a Gathering can, like Les Sylphides, Fokine’s ballet to Chopin’s music, seem entrancing or tedious, depending on the performers. Robbins was always exigent in his choice of dancers for the cast of ten, identified in cast listings by the colours of their costumes. NYCB’s cohort was a combination of principals, soloists and two members of the corps, seizing their chance to perform coveted roles. The hour-long ballet is a test of stamina, but the final performance (the fourth in three days) was joyous, speeding by, impelled by Susan Walters’s onstage playing of Chopin’s piano music.

It starts with the man in brown tights (Anthony Huxley) exploring the space, with its summer sky-blue cyclorama, as though recalling the friends of his youth. When they enter, there are no fixed pairings or allegiances. They dance with each other, sometimes flirtatiously or with hints of courtship, at other times playfully. Two girls in pink and blue wear their hair down; when they accompany a more mature woman in mauve (Unity Phelan), the trio resembles the Three Graces. Conspicuous among the men is a tall one in green tights (Aaron Sanz, a corps member), who has the pick of the women.

Each duet is a conversation, the couple leaving together as if continuing their dance elsewhere. Exits are frequently marked by unexpected lifts, the women swept off their feet or caught in mid-flight. Robbins intermixes ballet steps with folk dance ones, usually Polish in reference to Chopin’s origins. Solos reflect the music – dramatic, dreamy, extravagant. Late in the ballet, a woman in green (Maria Kowroski) enters for the first time.  Unlike the others, she addresses the audience directly in her solo, describing the music with twists and curves of her arms and torso. When three men enter in turn, she dances engagingly around each one, only to be politely rejected.  She shrugs, knowing there’ll be others. (The role was made on Violette Verdy, a charmer and chatterer.)

When the brown man returns and touches the ground reflectively, the ballet grows more sombre. The men bow to the women, who curtsey in return. All ten stand and look upwards and across, as though aware of a shadow eclipsing the sunny day. It’s a premonition that their youthful friendship and optimism about the future are bound to change. Though inevitable (bringing back memories of long-gone Royal Ballet casts in their prime), Robbins’s Gathering remains perpetually fresh, when it’s danced as lovingly as this.

Next on the first programme came Interplay, performed by eight members of the Joffrey Ballet from Chicago. Made in 1945, it’s a precursor of West Side Story (1957), with a cast of sporting youngsters who might be playing on a basketball court. They leap around to the jazzy rhythms of Morton Gould’s American Concertette for piano and orchestra. As in Dances at a Gathering, the cast is identified by the colours they wear. The boy in red (Yoshihisa Arai) is a jester figure, with a virtuoso comic solo. An adagio pas de deux for a girl in pink (Christine Rocas) with a partner in blue (Alberto Velazquez) is watched by the others in semi-darkness. Then the girls (on pointe) perform like cheerleaders, with high kicks and cartwheels, while the boys (in white socks) accomplish double tours en l’air; everybody is required to spin in fouettés. They don’t need to be academically perfect – they’re kids having fun.

Before the interval came A Suite of Dances, created for Mikhail Baryshnikov in 1994, when he took part in the White Oak Dance Project. It’s a dialogue between dancer and cellist, to Bach suites for cello. Anthony Huxley performed it as a solo accompanied by music, instead of a set of seemingly impromptu responses to Anne Kim’s playing. All too obviously, he knew what he was going to do next, instead of surprising us with a somersault or folk-dance flourish.

The Joffrey Ballet returned en masse for Glass Pieces, to Philip Glass’s repetitive rhythms. Created for New York City Ballet in 1983, it’s a new addition to Joffrey’s rep., under the direction of Ashley Wheater. A crowd of some 40 dancers in casual clothes criss-cross the stage, commuters avoiding collisions as they go busily on their way. Couples in lycra emerge for duets and disappear again. A graph-paper grid projected behind the swarm of commuters vanishes for the second movement, an adagio duet for Jeraldine Mendoza and Miguel Angel Blanco. Swooningly romantic, they are contrasted by a silhouetted frieze of dancers constantly changing places as they progress across the rear: an unending corps of urban bayadères.

Then it’s the turn of 12 men to drill athletically in formation. On come the women, flexing their wrists and tilting their hips, to challenge them. The graph-paper grid returns as the music becomes denser, the numbers swell and the intricate moves build in excitement until an abrupt ending, the cast caught in silhouette. Glass Pieces is both effective and glib, Robbins adapting his Broadway expertise to keep pace with the post-modern music and ‘pedestrian’ dance of the 1980s.

The programme, performed by two very different American ballet companies, displayed Robbins’s versatility while revealing the similarities in his approach to music. His choice of compositions tends to dictate how dancers will respond to each other, moods swiftly changing to suit the music’s evolution. He combines classical ballet with vernacular steps, artistry with athleticism – and in this programme, much the same brightly coloured outfits, versions of practice dress rather than theatrical costumes. Programme 2 was to look very different. 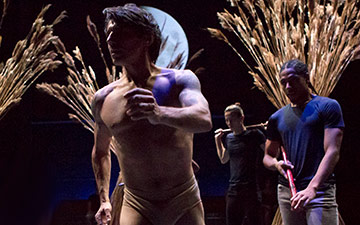 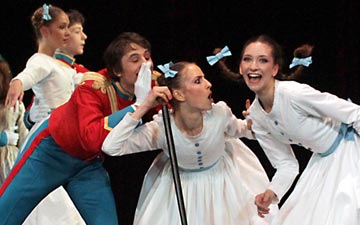