Mayara Magri makes her debut as Gamzatti in The Royal Ballet’s production of La Bayadere on 14th November 2018.
Full Details

Mayara Magri is instantly recognisable on stage, even in a minor role. It’s partly her Brazilian good looks and sunny smile but also her joy at being on stage, caught up in whatever part she’s dancing. ‘When Kevin (O’Hare) promoted me to First Soloist this year, I asked him not to take me out of anything because I want to experience everything’, she insists.

In this season’s run of La Bayadère, she is making her debut as Gamzatti (14 November), the rival to Lauren Cuthbertson’s Nikiya for the love of Solor, Matthew Ball. But she’s also performing as a Djampeh dancer and an odalisque in Act I, and a soloist Shade in Act II. ‘La Bayadère was one of the first ballets I danced in the corps after I joined the company six years ago’, she remembers.  ‘I was number seven bayadère down the ramp, so quite a few arabesques.’

Mayara had already danced Gamzatti’s Act II solo at the age of 14 for a dance school performance. She attended the Petite Danse School in Rio de Janeiro from the age of 8 and as she progressed, her teacher, Patricia Salgado, encouraged her to perform in recitals and prepared her for competitions.  At 16, Mayara won a major prize in a Youth America Grand Prix and then the audience prize and a scholarship at the 2011 Prix de Lausanne. She chose the Royal Ballet School, urged on by the School’s then director, Gailene Stock.

Studio rehearsal at The Prix the Lausanne, 2011. #coppeliavariation #7yearsago😱

“My teacher thought I should I should go to an American school and company, but I was set on the Royal Ballet’, she says. ‘I’d been given a DVD with Darcey Bussell dancing Gamzatti, and I thought “I want to go there”. Gailene said the School would give me the support I needed, so my mother agreed to let me go to London.’ Mayara battled to improve her English, scarcely speaking at all for the first three months. ‘Everyone thought I was shy, which I’m not at all. I wasn’t really homesick because I could Skype my family in Rio every day.’

She loves being in London and having the chance to perform a wide range of repertoire. ‘Because I’m outgoing and a good jumper I tend to get cast for ‘bad girl’ roles, but Kevin challenges me with fairies and purely classical ones,’ she says, smiling. She’s done the Gypsy girl in Ashton’s The Two Pigeons but also his Monotones and Symphonic Variations; Balanchine’s Rubies and Christopher Wheeldon’s After the Rain; Myrtha in Giselle and the Rose Fairy in The Nutcracker. More recently, she’s been Crown Prince Rudolf’s mistress, Mitzi Caspar, in four performances with Steven McRae’s cast of female partners.

‘I’d love to do more MacMillan roles, like Mary Vetsera and Manon – and Juliet. I danced the Romeo and Juliet pas de deux this summer for a gala in Japan with Luca Acri, coached by Federico (Bonelli) and Hikaru (Koboyashi). Now I want to do the whole ballet.’ The best thing about being in the Royal Ballet, Mayara says, is the privilege of watching great dancers on stage and in class: ‘We can absorb so much from them, like seeing Marianela (Nunez) and Natasha (Osipova) alternating in La Baydère as Nikiya and Gamzatti. They do it so differently.’

Does she see her Gamzatti as a ruthless, spoilt princess? ‘I understand her because she was told Solor was for her and she really loved him. The only way to get what she wanted was to have Nikiya killed. I’m not saying I’d do the same! She’s shocked when her maid brings Nikiya to her and when she sees that she’s beautiful, she really freaks out. I’ve been working with Lauren (Cuthbertson) on the fight scene. She’s done it before, so she really helps me get the details of the story across.’

#throwback to when I was rehearsing Juliet at the Royal Opera House for the Asteras Gala, in Japan. . . . It has been only 3 weeks off my pointe shoes and I already miss being in the studio… Looking forward to the beginning of the season! Wonderful moment captured by @dancersdiary #dancewithfreedom

In the betrothal scene, Mayara says that Gamzatti is right to rejoice in her kingdom and show off her technique.  However, ‘Those fouettés are hard because of all the people around and alongside you. Usually you’re on your own to focus on fouettés, with no else moving at the same time. Of course the lighting is much brighter than in Mayerling, so you’re really exposed.’ Mayara has been coached for Gamzatti by Carlos Acosta as well as by Natalia Makarova, who was concentrating on the opening performances. ‘She’ll find time for me now they’re done. I’ve already had her for the Shades variations and she’s tough but wonderful. I’m so lucky!’

Mayara says she found it hard at first to switch from one kind of rehearsal to a completely different style:  two hours with Wayne McGregor for a revival of Infra, followed by a session with Makarova expecting classical perfection. ‘You get your body used to it, you learn to plan ahead with what shoes you need, you forget that your feet hurt. You’re tired but so privileged that you can’t possibly complain.’

For the Shades variation (the second, slow one), Makarova advises imagining ‘that you’re above the clouds, brushing water with your hands, using your muscles like chewing gum.’ Mayara demonstrates the arm movements, transforming herself into a mythical being. The she adds: ‘You can’t really see much with that scrim in front of you (for The Kingdom of the Shades) and a spot light and bright lights from the sides. You have to rely on your technique, and it’s a challenge for me as a speedy, jumpy dancer.’

Her next big debut is as Kitri in Acosta’s production of Don Quixote in March 2019. ‘I’m so excited – there’s so much of my personality in that role. I couldn’t be happier! My family is coming from Brazil to see me dance. The only other time they’ve been able to see me in a full-length ballet was when I did Giselle with Thiago Soares in Sao Paolo.’ (That’s another role she’d love to dance with the Royal Ballet, after being cast as Myrtha, Queen of the Wilis.) ‘It’s not easy to be a guest artist in Brazil because they can’t afford guests. Brazilians dance all over the world but they’re not properly paid in their own country. I’d like to go back eventually but it’s so much more secure for me to have a career here.’

Mayara was invited by Twyla Tharp to work with her in the United States but chose not to take the risk. ‘Twyla wasn’t happy with me at first when she mounted The Illustrated ‘Farewell’ with us last year. She made me repeat a solo 14 times without telling me why it wasn’t right. “Do it again, try again”. When I was exhausted she said ‘”OK, now we can work from here”, and she was fine with me after that.’ Mayara caught everyone’s attention when her brief solo in silence introduced the second part of the ballet, after a new virtuoso duet for Sarah Lamb and Steven McRae. Mayara and Joseph Sissons memorably led the corps of 17 youngsters in Tharp’s reworking of her 1973 As Time Goes By, to the fourth and fifth movements of Haydn’s ‘Farewell’ symphony.

Performing under pressure makes Mayara dance better, she says. ‘I feel safe on stage because that’s what I really want to do. I’m here to entertain and involve an audience in as many roles as I can. I’d like to guest with other companies for the experience but I’m very happy right now with what I’m achieving in the Royal Ballet.” 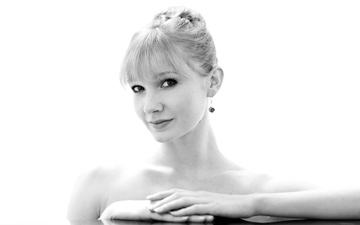 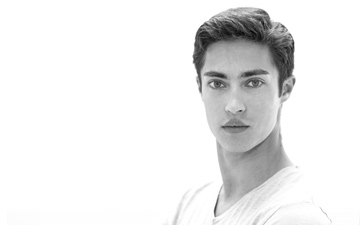 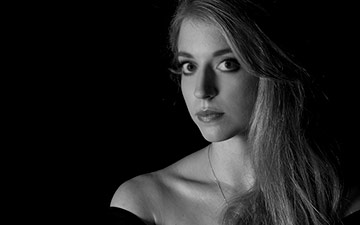 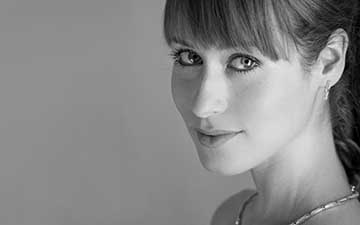 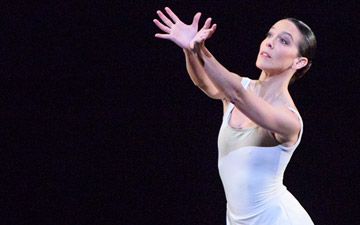