Now that we are all one more Nutcracker nearer death, as weary critic Richard Buckle used to bemoan, the Royal Ballet has given us a wintry bonne bouche of ballets to savour. Two are pure fun: there’s no need of synopses for Frederick Ashton’s 1937 Les Patineurs or Jerome Robbins’s 1956 The Concert. Kenneth MacMillan’s Winter Dreams, however, does benefit from a programme note about its source, Anton Chekhov’s The Three Sisters. MacMillan didn’t set out to tell the play’s story as a ballet (as Ashton did with Ivan Turgenev’s A Month in the Country) but to meditate on its character’s dilemmas. Created during the last year of his life, it serves as an elegiac centrepiece in the triple bill.

A synopsis of Winter Dreams would be helpful in the skimpy cast sheet, as would notice of cast changes. Why no announcement before curtain up that Gary Avis would be making his debut as Kulygin, and that in The Concert, Nehemiah Kish would be replacing injured Bennet Gartside? Royal Ballet audiences aren’t (yet) trained to spot bits of information in the newly Opened-Up foyers. It’s disrespectful to dancers to assume that their unscheduled performances are hardly worth a prominent mention.

Winter Dreams worked best on VHS video, recorded with the original cast in 1992 by Derek Bailey in collaboration with MacMillan. The cameras could contrast the Prokhorov family’s dinner party inside their country house with stolen encounters in the garden outside. On stage, the party guests are obscured behind a scrim, along with the musicians playing Philip Gammon’s arrangement of Tchaikovsky’s piano music, with Russian folk tunes transposed for guitars as well as balalaikas. There is little sense of intimacy on the foreground of the bare set, and it’s hard to tell whether those having private moments are aware of being watched by half-hidden observers.

How many of the family members and their servants know that Masha, married to schoolteacher Kulygin, is having an affair with married soldier Vershinin? Most of them, including Masha’s unhappy husband. In one sense, the ballet is an extended pas de deux for Masha and Vershinin, interrupted by vignettes for the other characters, unhappy in their own ways. The climax is the ‘Farewell’ pas de deux, first created as a gala number of Darcey Bussell and Irek Mukhamedov. By the time it appears towards the end of the long one-act ballet, we know so much about the mismatched couple and the people they affect that the passionate duet can appear a melodramatic indulgence. Marianela Nunez and Thiago Soares as the opening night cast were achingly sincere, though Soares cannot hit the high notes Mukhamedov achieved in the Bolshoi-style leaps MacMillan choreographed for Vershinin.

Those leaps are a pent-up expression of the frustration that dominates the ballet and Chekhov’s play. Love is misplaced, ambition thwarted, freedom of choice constricted. The eldest sister, Olga (Itziar Mendizabal), is unmarried and unable to console her sister’s husband (Gary Avis as Kulygin). She has a solo in which her hands tell of her discomfit: she clenches her fists, twists them behind her back, strokes her thighs. Kulygin’s hands are even more fraught in his solo, as he claws at the air, squats and bows in craven despair. Avis shows that the man despises himself for his inadequacy in his wife’s eyes, though he loves her so dearly that he is prepared to endure her infidelity and even, pathetically, try to comfort her.

Yasmine Naghdi as Irina, the youngest sister, almost steals the ballet. Her hands and skirts are free flying as she flirts with her soldier suitors, believing she has the luxury of choosing her future. Naghdi embodies the innocence of MacMillan’s vulnerable, naive heroines (like the girl in The Invitation) whose lives will be damaged. She clings to the skirts of her older sisters in the repeated pose that ends the ballet, each caught up in her own grief.

The meditative structure is made unwieldy by MacMillan’s inclusion of cameo roles for his old friends and colleagues: the family nanny (Gerd Larsen, now Kristen McNally); the drunken doctor (Derek Rencher, now Christopher Saunders). These secondary characters have no context in the ballet’s narrative. MacMillan hadn’t fully accounted for the roles of the brother (Valentino Zuchetti) and his ghastly wife (Lara Turk), who will evict the sisters from their home in Chekhov’s play and lay waste to their garden. But the ballet captures the tragic melancholy of the sisters who deserved so much more from their lives.

Ashton’s early skating ballet has none of the Edwardian nostalgia of his later Enigma Variations. Set in a Victorian park in William Chappell’s designs, the cast of Les Patineurs are young and tireless, coming and going as though continuing to skate out of sight in the wings. The Blue Boy (Marcelino Sambé), who opens and closes the ballet, spins on the spot without ever losing momentum. In past revivals, the curtains closed and opened again immediately as he continued spinning: not any more, alas.

The Blue skater’s bounding entry at the very start determines the conductor’s tempi to coincide with his landings and cocky posings. On opening night, the timings seemed as under-rehearsed as those (deliberately so) in The Concert. Barry Wordsworth’s baton continued to be sluggish in what should be an effervescent display of skating prowess, despite (deliberate) tumbles. The corps swoop around, arm in arm, in gliding steps, chassés, that have changed their execution in modern technique. Instead of sliding with some weight on both feet, dancers now skim across the surface – less effective than in Ashton’s day as a simulation of skating.

Female couples in blue and dark red prance across the ice on their pointes, an imitation of skaters using serrated toe picks to stop slipping. Yuhui Choe and Anna Rose O’Sullivan in Blue pirouettte insouciantly, and Mayara Magri and Beatriz Stix-Brunell in red complement each other in bendy swoops and high kicks. As the glamorous white pair, Fumi Kaneko and William Bracewell look uneasily matched since he is not tall enough to sweep her impressively off her skates.

My only other quibble about a favourite ballet, deliciously danced, is the tedium of the programme articles, treating Ashton’s choreography and Meyerbeer’s music as subjects for academic essays. Why deaden an enjoyable experience with solemn banalities and irrelevant information about the creators’ other works in order to justify the exorbitant price of a programme?

Notes about Robbins’s comic choreography and his use of Chopin’s piano music in The Concert are far more appropriate, even though the jokes require no explanation. Robbins’s targets were the pretentious behaviour of concert-goers and the absurdities of neo-classical ballet conventions. His affectionate mockery has been taken even further by the all-male Ballets Trockadero de Monte Carlo, whose dancers inhabit a fantasy realm of balletic diva-dom. Robbins’s cast are more prosaic in their practice dress underwear, accessorised by hats, scarves and umbrellas. Though they are recognisable types, they are such cartoon characters that the silly men can’t be accused of misogyny in carting the women around like shop-window dummies.

Laura Morera takes no nonsense from her manic Groucho Marx husband (Nehemiah Kish, murderously funny) and Lauren Cuthbertson is alluringly daffy as the ingenue girl with a fondness for hats. Robert Clark, anonymous as the pianist in Winter Dreams, comes to the fore in The Concert as the performers’ nemesis, ready to slay them for their irreverence towards Chopin’s music and his sensitive rendering of it. A delightful end to a very mixed programme. 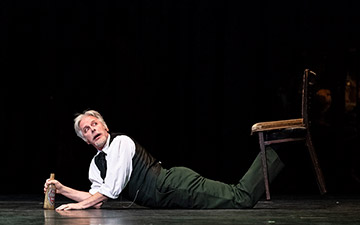 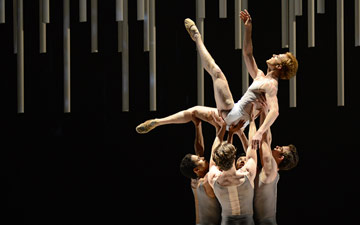