Abstract themes and stocking feet took a front seat at the Royal Ballet’s inaugural International Draft Works bill, held at the recently refurbished Linbury Theatre. The new initiative is an offshoot of the popular Draft Works development programme, which fosters budding dancemakers within the Royal Ballet. Here, the platform has been opened up to major ballet companies around Europe and North America, with dancers and choreographers from the likes of Hamburg Ballet and National Ballet of Canada joining the Royal Ballet for an evening of brand-new work. All ten pieces on show were strong, considered commissions, and more than half came from female choreographers – a heartening boost for this male-saturated field.

One of the night’s liveliest works came from Drew Jacoby, a principal at Royal Ballet Flanders. Her male quartet, Jack, delivers drama and zing, pitching body-pumping panache alongside virtuosic classical moves, the dancers reconciling these disparate styles with poise and dazzling personality. Kitted out in neon Lycra and metallic face paint, they lunge, wiggle and chug, testing the parameters of masculinity. At times they exhibit the freewheeling flamboyance of a rave; in other scenes they’re as focused as a pack of speed skaters. The group’s fluid, empowered energy is riveting, as is Jacoby’s tight choreographic language.

A similar particularity of vision can be seen in duets from Samantha Lynch and Douwe Dekkers of Norwegian National Ballet and Milena Sidorova of Dutch National Ballet. Lynch and Dekkers provided the evening’s sole joint commission and its only self-performed one, a poignant, athletic tangle of spidery limbs and scooping lifts. The soundtrack is bizarre – an esoteric recording of a child’s birthday party interrupted by the rock hit “Little Bitty Pretty One” – but chimes with the warmth of the choreography, particularly a soft, rebounding solo from Lynch. Sidorova, meanwhile, sets her piece to the melodic refrain of Groove Armada’s “At the River.” Here Khayla Fitzpatric and Giovanni Princic conjure easy-breezy California cool as they dance out the skin-tingling thrills of a summer fling. The romance is sexy, charismatic, and the choreography makes excellent use of negative space, the pair winding their torsos around each other’s outstretched limbs.

Kit Holder of Birmingham Royal Ballet exhibited one of the bill’s best technical showings with Stems, a sleek, abstract suite of duets (and one of just three works performed en pointe). Holders’ dancers plunge in and out of the wings, serving up long, lean lines and muscular port de bras. The performance was secure, polished, no foot put wrong; it helped that some of BRB’s foremost company members were involved, including principal Delia Mathews. Grey Verses, from National Ballet of Canada’s Brendan Saye, likewise excelled on the virtuosity front, packing sharp, practised velocity into a succession of tender couplings. Under Saye’s direction, spiky feet and sharp elbows top off yearning extensions and reaches, the four dancers wrenching their limbs with beautiful intensity.

While less technically sound, ensemble works from Joshua Junker and Aleix Martinez of the Royal Ballet and Hamburg Ballet, respectively, featured some of the evening’s most stimulating music choices. Junker’s Canto de Ossanha is set to a soulful track of the same name by Brazilian guitarist Baden Powell, and greets its swerving strings with concave torsos and wistful swinging arms. There’s a wonderful juxtaposition between the dancers’ low, grounded poses and Powell’s soaring vocals, though the music is doing some of the heavy lifting here. It’s a similar situation with Martinez’s Seelen-Spiel (Soul Game), with the hypnotic notes of Ravid Goldsmith elevating serviceable contemporary phrases into expressive, trance-like sprees.

With a dozen dancers and a whirling dervish of choreographic arrangements, Gemma Bond’s Interchangeable Text was the programme’s busiest, biggest-scale showing. Created on members of American Ballet Theater Studio Company, ABT’s pre-professional troupe, the piece is sharp and snappy, a neoclassical offering with darting chassés and blunt, popped arabesques. Its ambitious speed facilitated a number of fleet feats, including quicksilver leaps from the men, but also some near misses, usually spied in the fussy pointework. The timing leaves no room for error, and more than a few dancers scrambled to keep up.

The Royal Ballet’s Hannah Grennell showed a flair for the weird with Zohar, a spacy number that sets principal character artist Kristen McNally and a trio of men adrift in an eerie alien landscape. I can’t say the professed theme of Kabbalah is especially evident, but there’s a whiff of mysticism in the group’s liquid wiggling and strange swinging gestures. Meanwhile, it’s robots that come to mind in Sidorova’s second work, AI, which plays on the “terrifying and exciting” advent of artificial intelligence. In a glittering jacket, Aya Okumura of Dutch National Ballet comes at us with sharp pointework and fierce lunges, the odd robotic gesture punctuating her feline prowl.

The ten choreographers of International Draft Works include faithful disciples of existing ballet conventions and original voices keen on reshaping the canon. In this sense, the programme looks both backwards and forwards, attesting to the exceptional training of the world’s leading ballet companies and offering an exciting glimpse of the next generation of gatekeepers. 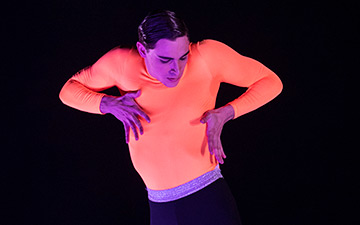