The piece with the most obvious traditional roots, Kiona and the Little Bird Suite, was one of the more successful of the evening. Despite using excerpts from a half dozen works, Kiona felt relatively seamless and of one mind. Using live drumming, chanting and singing, Kiona featured examples of Samoan sasa (seated dance) and fa’ataupati (slap dance). Opening with a stage flooded in blood red lighting, the chanting is meditative and haunting, but the work opens up to incorporate somersaults, and striking feats of contact movement, the women’s choreography often being as combative as the men’s. A militaristic aesthetic hovers, which isn’t surprising given that plenty of indigenous dances are rooted in a desire to communicate strength, unity and ferocity to enemies – it goes without saying that New Zealand’s rugby team is famous the world over for performing the haka, a Maori war dance, before matches. Kiona is a moving example of the fusion possible between the traditional and the contemporary and was the first taste of what these dancers can do: fly around the stage with astonishing momentum and stop-on a dime.

As Night Falls is a weighty piece that takes on contemporary burdens from police brutality to the teeterings of democracy and an increasingly fractious sense of community. Night may try to take on too much, and its use of Vivaldi combined with furiously speedy choreography, makes it a frenetic hive of activity with little rest for the eyes. Many feats are astonishing, including a horizontal body ripple created by one male dancer picking the other up by the ankles, setting his partner’s body in motion like a cracked whip. The police brutality scene was obvious enough, if a bit heavy handed, although other themes referenced by Ieremia in the notes are harder to see.

Crying Men centers around masculine struggles across three generations of Polynesian men and is a collaboration between Ieremia and playwright Victor Rodger. Using a bleak, atmospheric, commissioned score by Anonymouz & Submariner, Crying Men is dark. The three male journeys aren’t as clearly delineated as they could be but plenty of broader points were made, including internal masculine strife. Soloist Shane Tofaeono attempts to woo a female by trying to impress her with physical and verbal prowess, and in a lengthy series of spasmodic, repetitive facial and body gestures, his face begins to render the terrors of a Francis Bacon painting: a raw, blurred open maw. The female returns the favor with equally impressive speed, the audience laughs, he exits and the grotesque exchange is over. Crying and Night Falls both feel like attempts at saying too much with too little, weighing down the dance with messages that can sacrifice form and overall construction.

Set to a few of Bach’s Brandenburg Concertos, Method crackles with verve and derring-do, most closely resembling Paul Taylor’s Esplanade in its atmosphere and sheer audacity (not to mention the choice of Bach). Dancers leap and dive into the stage as if it was a swimming pool. Bodies are lifted into the air by multiple dancers and dropped suddenly with a pendulous momentum. A dancer rolls across the stage as if tumbling down a hill, while the rest of the troupe jumps over the body (in Esplanade one dancer leaps over two seated bodies at a time). Method excavates the dichotomy of risk and play, and the delight that comes from the balance of the two. While not revolutionary, it is entertaining and exhibits the talents of Black Grace’s dancers at their height. 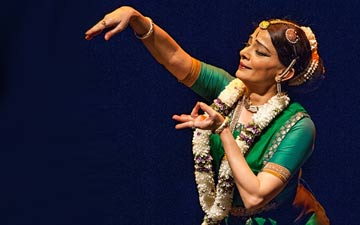