X6 Dance Space (1976-80): Liberation Notes is a well overdue exhibition profiling the groundbreaking work of the radical 1970’s dance collective, X6. The group of revolutionary dance practitioners who formed the collective in 1976 – Jacky Lansley, Emilyn Claid, Fergus Early, Mary Prestidge and Maedée Duprès sought dance liberation through redefining the body in dance while documenting that process through writing a magazine. The exhibition curated by Rachael Davies at the oasis-like space Cell Projects in Hackney takes you on a memorable journey of the groups fascinating history. A rich array of photography, excerpts from the magazine, along with a few video clips of performance fragments and books by dance scholars involved with the collective bring to life the many ways in which X6 created dance that connected to its social and political context. Liberation Notes also brings awareness to X6’s invaluable legacy, its vital contribution to somatic practice, independent dance as we know it today and dance scholarship.

X6 members had all undergone traditional ballet training and wanted to find an alternative dance practice to ballet as well as to the Martha Graham and Merce Cunningham influenced contemporary dance that existed in London at the time. Their new experiments developed in reaction to the right-wing British politics and mainstream culture of the 1970s and intersected with several liberation groups at the time such as Gay Liberation, Black Women’s Movement and, most significantly, second-wave British feminism. While the Women’s Liberation Movement was revolutionary and shared politics with other groups of oppressed peoples what was different about women’s liberation was that it claimed women’s personal experiences were political and therefore the ‘raw material’ of a social movement.

The ‘raw material’ for X6 artists included the experiences of highly regulative dance training, hierarchical employment conditions and biased criticism by dance critics. X6 embodied the famous second-wave feminist slogan, ‘the personal is political’ in explorative physicality as they attempted to free the female body from the grip of patriarchy and establish an alternative dance practice, aesthetic, teaching method and critical writing style. The practice they developed was called new dance and the magazine they founded took its title from the practice – New Dance magazine (1977-1988). As Jacky Lansley wrote in her first editorial “writing is necessary as a creative extension of our work” (Lansley in New Dance 1977 -1:3) and the publication provided a critical context for new dance in the UK, framed through feminist and queer theoretical thinking. The collective, which Fergus Early once described as “not a dance group, not a school, not a rehearsal room, but a body of diverse ideas, finding a form of collective organisation” (New Dance 1979-9 : 11), was part of other experimental artists networks such as the London Film Co-op and the London Musicians Collective (1976), all of whom embraced the non-hierarchical structures of collectivism.

The history of the X6 Collective can be defined by both spaces and people, and this is conveyed effectively by the exhibition’s extensive collection of photographs. Geoff White’s original black and white images reveal X6’s first home, a disused warehouse in Butler’s Wharf, block X, floor 6 – from which they took their name. They show a huge space, splendid with high beamed vaulted ceilings and a wooden floor where the artists rehearsed, performed, taught classes, workshops and held discussions. Other photos portray a variety of surrounding outdoor locations where artists also performed: the littered shores of the Thames, dingy back streets, Tower Bridge – all fascinating recollections of the raw, derelict urban wastelands of Butler’s Wharf before property developers moved in to gentrify it. In 1980 when developers did reclaim the building, X6 moved to the artist-led Chisenhale Dance Space, from where they operated for several more years. At this time the collective rapidly expanded into a wider community of new dance practitioners, writers and thinkers creating work across disciplines. Their connection with Dartington College of Arts, the subject of several photographs, introduced international practitioners who added their new approaches to movement such as Mary Fulkerson (Release technique) and Steve Paxton (Contact Improvisation). Displays of posters advertising performances or dance classes and programme notes disclose many more familiar dance artists: Rosemary Butcher, Anna Furse, Sue MacLennan, Sally Potter, Miranda Tufnell and Julyen Hamilton to name a few.

As there remains little film footage of performances from this time, it’s particularly exciting to see video clips of a work by Lansley and Early, I Giselle (1980). The work created a feminist re-reading of the stereotypes from the original ballet and while the video’s poor quality makes it difficult to follow, one can see the empowerment of female characters as they become singing, dancing and talking subjects, rejecting any one style but referencing many: ballet, gymnastics, folk dance, musical theatre. While another video, Contact Improvisation (1980) by Stefan Szczelkun shows Emilyn Claid and Kirsty Simpson dancing a duet in which they explore touch and weight sharing within contact improvisation. Hanging beside the video monitor is an evocative piece of performance ephemera, part of a costume worn by Jacky Lansley as she created alternative imagery in her solo Dance Object (1977). A black dinner jacket whose pockets contain a fake pistol, a 70’s feminist polemic book and a pair of black ballet shoes displays all the ammunition needed for an angry feminist choreographer to dismantle female objectification.

To make up for the lack of visual material, Liberation Notes showcases a generous selection of extracts from New Dance magazine – reviews, articles, letters, cartoons and editorials. We see a cartoon image featuring a ballerina in pristine white tutu, en pointe, her leg raised in a balletic arabesque to reveal a bloodstained crotch, visually embodying the rebellious physicality of X6. Sketched as a flier for a performance entitled Bleeding Fairies (1977) the cartoon became one of the most iconic covers of the magazine visually encapsulating the non-conforming aesthetics and ingrained sexuality of these choreographers’ practice; portraying dancers’ bodies as resistant, messy and powerful. Articles about body politics and feminist agendas are entertaining and informative to read, for example, performance artist Rose English’s provocative critique of male constructions of the ballerina, framed through a feminist psychoanalytical lens, is witty, damning of patriarchy and progressive. Other features depict X6’s awareness of working with disabled artists or with the emerging black British dance. Whatever the impact of the magazine’s attention to artists of colour and queer choreographers, X6 writer/practitioners did expose dance that was mostly invisible and certainly ignored by dance critics.

Alongside the exhibition short performances by Lansley, Early, Claid and Prestidge, (sadly only taking place on one day), share moving reflections on their earlier work and how these resonate with the artists and scholars they are now. Memories of past works, fleeting fragments, gestures and words, costumes worn, objects used and haunting film extracts lightly catch the essence of each choreographer and their idiosyncrasies. Eccentric, experimental and searching these delicious performance treats pay testament to a group of artists who are disarmingly timeless and unapologetically alternative.

To hear the founding members of X6 discuss their work and its political context during a panel discussion and connect their struggles with the plight of independent artists today feels particularly important and very relevant. The exhibition and the various events that ran alongside it must be celebrated for bringing such extraordinary dance artists back into our vision and capturing precious archival material that contributes so much to our dance ecology. 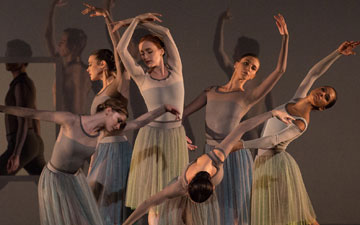 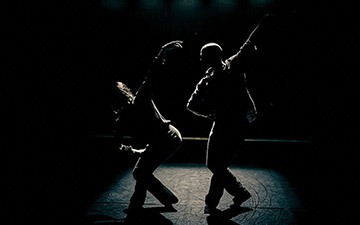 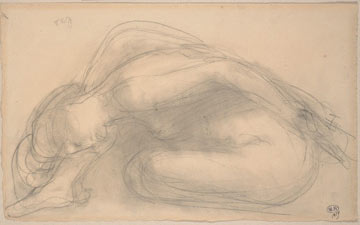 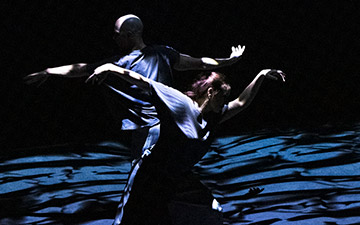 Gallery – Russell Maliphant & Dana Fouras in The Space Between (Maliphantworks3)