The premiere of Cathy Marston’s The Cellist in February earlier this year seems a lifetime ago now. While I was lucky enough to see both casts (live), the recent streaming on the ROH website was more than welcome at a time when the prospect of seeing any consistent live performances in the near future seems to be a mere speck on the horizon. Marston has achieved much in bringing the life of Jacqueline du Pré to the ballet stage and perhaps one of the things that becomes even clearer with repeated viewings, is that the music and the dance are inextricably linked. The wonder of this creation is that one cannot fail to be deeply moved not only by du Pré’s tragic life story but by the devastation played out on stage by the three leading characters: Lauren Cuthbertson as The Cellist (du Pré), Marcelino Sambé as The Instrument (cello) and Matthew Ball as The Husband (Daniel Barenboim).

If I was going to gripe about anything, and this is with reluctance, I maintain that the peripheral characters are not explored enough and that the corps de ballet is a distraction rather than an embellishment. Whilst one acknowledges that it is necessary to include these extra bodies in order to understand the narrative, a tighter, more contained corps would allow the central characters space to amply tell the story. The advantage of watching it on screen, under the superlative directorial skills of Ross MacGibbon, is that the focus of the filming is very much on the emotional depths as expressed by the main trio. The ballet tells the story of du Pré’s life from childhood, through to her hugely successful career, her marriage to Barenboim and her gradual decline after being diagnosed with multiple sclerosis. All this is very clear, but at each viewing, I have been somewhat unprepared for the impact those individual performances themselves would have. In the theatre, I was able to contain my emotions by shedding a few tears, mopped up by the end of the curtain calls. In the privacy of my own home, I sobbed for fifteen minutes and had to hit ‘pause’ to compose myself.

The cleverness of the choreography is that the story is told with a vocabulary that is, without doubt, an object lesson in wearing one’s heart on one’s sleeve. Ball is vital and virile as The Husband, and it’s easy to understand why he would attract a vulnerable, young woman. Cuthbertson looks as if she has studied the cello quite seriously – there is a moment when she glances at Ball as she plays the final notes on The Instrument, the same moment that the love story begins, and we are entirely swept up in it. There are passages where Cuthbertson, Ball and Sambé dance in lyrical swathes of occasionally idiosyncratic movements, leading the eye to believe that the three are inseparable from one another – that the love affair can only move forward within the context of the music. This is, in part, because (quite rightly given the subject matter) Philip Feeney’s score, which incorporates music by Elgar, Beethoven, Fauré, Mendelssohn, Piatti, Rachmaninoff and Schubert, is integral to the success of the piece and mesmerising to boot. In places it is hauntingly melancholic, encouraging the listener to completely immerse oneself in the significance of the sounds emanating from the pit.

But for me, it is as the progression towards du Pré’s illness that the rawness of it all starts to hit home when The Cellist has come to the end of a tough concert tour and she is exhausted. There is a painful moment when Cuthbertson and Sambé are sitting alone on the vast set (designed by Hildegard Bechtler) and she struggles to get to her feet. As she crumples to the floor, he gently comes over to her, nudging her back, urging her to find her strength. The look of compassion in Sambé’s eyes is heart-rending, almost intolerable. Her inability to ‘play’ him results in her rejecting him – a dramatically powerful moment that makes us believe he is actually the embodiment of her soul.

After some rehabilitation with her family, she is launched back onto the concert platform setting the scene for the next heart-stopping moment as she attempts to play in front of a small audience. This is almost shocking in its delivery, as she faces the back of the stage and her hands simply do not work. The following duet, between Cellist and Instrument, is emotionally charged, so traumatic in every way, that I experience a Romeo and Juliet moment where I want to rewrite the narrative or in this case, history. Musically, it is transporting; but the sensuality, the anguish with which Cuthbertson and Sambé realise their parts is something that stays with you long after the ballet has finished. Andrea Molino conducts the orchestra of the Royal Opera House with great sensitivity whilst Hetty Snell, playing the solo cello, is magnificent. 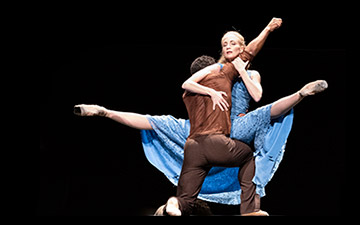