How do you transfer film musical perfection to the theatre? Jonathan Church’s adaptation of Singin’ in the Rain is impressively compact, incorporating all the best known scenes and numbers – and adding a little excitement (especially for the first few rows) with the iconic rainstorm scene, as thousands of gallons of water pour on to the stage and Adam Cooper’s loved-up Don Lockwood splashes up a storm through the puddles.

The production, which started life in Chichester before a West End run, is now ten years old, and Cooper has been there since the start. Now 50, the former Royal Ballet and Matthew Bourne/New Adventures star takes things gently, moving with a rather patrician grace in the Gene Kelly role and leaving the dance fireworks to the younger cast members. Andrew Wright’s choreography looks in places as though it’s been designed to take the spotlight off the leading man. He still holds his own, notably in the exhausting Good Morning routine – you just can’t help wishing for a little more pizzazz.

The plot (as everyone knows) whisks us back to 1920s Hollywood and the birth of the “talkies” – Lockwood and his co-star Lina Lamont are silent-movie idols, but can they and their studio make the transition to films with sound? The jokes come thick and fast as their inept attempts to make “The Duelling Cavalier” into a talking picture pile up. This production’s silent movie re-creations (projected on to the stage) are a hoot, and Cavin Cornwell, with his rumbling bass, is terrific as the put-upon studio boss.

Key to the screwball humour is the less-than-lovely Lina – played for most of the run by Faye Tozer of Steps, but on the night I watched by Jenny Gayner, who threw her all into Lina’s screechy, helium-high Noo Yoik accent and was great at letting the cracks of insecurity show through the monstrous ego in her solo number, What’s Wrong with Me?

In the Debbie Reynolds role as Don’s love interest, Kathy Selden, Charlotte Gooch is perfectly poised – maybe too much so for a character we need to believe is a wide-eyed ingenue? – and beautifully fluid in her duets with Cooper. When he croons “the angels must have sent you” to her during You Were Meant for Me, her immaculately disappointed “Oh” delightfully nails the corniness of the whole scene.

The former Strictly Come Dancing professional Kevin Clifton has a mountain to climb as Don’s sidekick, Cosmo Brown. He doesn’t possess the zaniness of the incomparable Donald O’Connor in this court jester role, but looks supremely comfortable on stage, provides all the manic hoofing energy when paired with Cooper for Fit as a Fiddle and Moses Supposes (including some marvellous spaghetti-like legwork) and is cheerfully adept in the big Make ’Em Laugh number.

There are sparkles aplenty as dancers flood the stage for the big set pieces, and the jazzy modern Broadway Rhythm section is skilfully retuned, daubed in acid-bright colours and an itchy restlessness. The live orchestra – revealed fleetingly but mainly hidden at the back of the stage – adds plenty of vigour. And yet… I didn’t leave feeling giddily transported; rather that I’d watched a well-oiled machine going neatly through its paces. The film’s perfection maybe looms just a little too large for this cast to conquer. 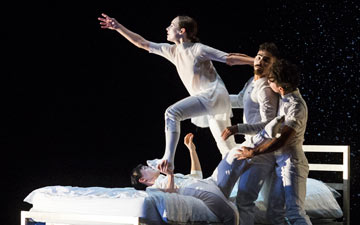 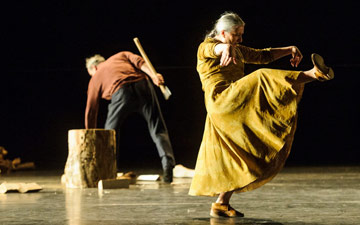