Classical music is dying, opera is dying, ballet is dying, so goes the woeful refrain. Part of the blame is usually attributed to the arts themselves: are they engaging, relevant, or cool enough for the younger set? The implication being that serious “classical” works are arid, impenetrable slogs for the initiated, by definition a humorless, elderly bunch who prefer to sit in stony silence passing judgment (or sleeping) to Wagner until it’s time to hustle to the train. Sound familiar? All one needs to do is take the trouble to attend a concert to know that it isn’t so, that music is thrilling stuff – not always, of course, but it can be. And what joy to see a performance turn into a kind of rave, as it did on June 27 at the New York Philharmonic during A Dancer’s Dream, to feel the music overflow the boundaries of convention and habit and feel, well, intensely alive.

It all went down during the second half of the special program entitled A Dancer’s Dream, a collaboration between the Philharmonic (under the baton of Alan Gilbert), the production team Giants are Small (Doug Fitch and Edouard Getaz), the choreographer Karole Armitage and a handful of dancers and puppeteers. The full evening consisted of two Stravinsky ballets – Le Baiser de la Fée and Petrushka – with excerpts from an imagistic, Debussy-like piano work for four hands, Les Neiges, by Louis Durey, in between. (The piece was beuatifully played by Eric Huebner and Steve Beck.) And though the overarching concept of the evening didn’t really work, with Baiser in particular creating a pallid impression (more on that in a moment), the performance of Petrushka was simply thrilling.

What made it so? Basically, at a certain point dramaturgical concepts and preconceptions melted away and everyone was drawn into the joy and adventure of this thing – making music. There’s nothing like it. The trick is that it only works with lots of preparation – a lifetime of intensive study and practice – coupled with imagination and a bit of risk. And then there’s the music itself. Petrushka, played the right way, contains a whole world of folk melodies, irresistible rhythms and riotous orchestral colors. (Gilbert chose to use the initial orchestration, which, as the program notes point out, is “colorful to the point of extravagance.” Precisely.) It’s music with physical impact – that rat-a-tat of drums! the blast of trumpets! – and redolent with sounds from the street, like the humble pipe organ, simulated by flutes and clarinets. The Shrovetide Fair, the puppet-theatre, a lumbering bear on a chain, drunken multitudes, it’s all there in the music. And it tells a story, too, about a love triangle between three puppet characters drawn from commedia dell’arte: an empty-headed ballerina (Columbine), a be-turbaned bully (the exotic Moor), and of course the woebegone Petrushka (“little Peter,” or Pierrot).

In Dancer’s Dream, these elements, already audible in the music (and spelled out in Stravinsky’s libretto), were brought to life in a multitude of ways. Doug Fitch’s puppets danced and tussled, their diminutive size magnified by live video technology. There were even different types of puppets, some made of articulated paper, others, bunraku-like, manipulated by two puppeteers. Two actors (actually the singers Anthony Roth Costanzo and Eric Owens, but it makes little difference since we never heard their voices) also appeared, in giant projections. The New York City Ballet dancer, Sara Mearns, billed as the star, was seen live, in puppet form, and pre-recorded on screen, skittering on pointe or performing digitally accelerated turns. Toy toboggans careened down miniature mountains, onion domes danced, a Russian toy chicken pecked its wooden platform. Amar Ramasar, another dancer from New York City Ballet, not only danced a spiky, quick-footed solo full of sharp steps, shooting every which way, but also joined in a boisterous Russian dance and a lusty balalaika trio with two of the puppeteers and even did a bit of puppeteering. (Ramasar seemed to be everywhere at once, having the time of his life. His glee was infectious.) The musicians too got in on the action, performing little cameos for the camera (like drinking tea from a samovar). At one point, a violinist lay down her instrument and proceeded to juggle colored scarves, perfectly on the beat, and did a Russian dance to boot. (This was a high point.) Alan Gilbert doubled as the story’s magician, stepping away from the podium while his baton continued to conduct on its own, à la Fantasia. By the end, when Stravinsky’s fairground music went completely boozy, the musicians stood up and danced at their seats. It was marvelous.

Now, don’t get me wrong: the actual choreography (by Karole Armitage) could not hold a candle to the original 1911 Fokine ballet. The puppet’s moves were not nearly as musical or awe-inspiring as the ones the puppeteer Basil Twist devised for his version a few years back. And the spiritual dimension of the story – the question of whether Petrushka has a soul – was completely lost in the shuffle. Nor did the production successfully mesh the two parts of the evening. No single aspect was ideal or perfect in and of itself. But who cares? The spirit was there.

Now, about that first part of the evening, Baiser de la Fée. The ballet, which Stravinsky composed for the dancer and impresario Ida Rubinstein in 1928, is based on the Hans Christian Andersen story, The Ice Maiden. A fairy saves a young boy from death with a kiss; then, years later, on his wedding day, returns to claim him for her own. Its message, that happiness in life has a price, can be read as a metaphor for the artist’s calling (art chooses you and pulls you away from worldly matters). Stravinsky saw it as an allegory for Tchaikovsky, and wrote music that was an explicit homage to the composer, its themes based on melodies from various early works. In mood and color, it evokes many aspects of Tchaikovsky’s Sleeping Beauty (parts of which Stravinsky orchestrated for Diaghilev), with hints of evil lurking at every corner, as well as benevolent magic, pretty waltzes, yearning visions. Versions of the ballet were choreographed by Bronislava Nijinska and Balanchine. (City Ballet still performs Balanchine’s Divertimento from Ballet de la Fée, which distills its themes to an essence.)

In order to create an integrated evening, the current team has constructed a slightly different story, in which a young woman (played by Sara Mearns, of New York City Ballet), is lured into the life of a ballerina, like Alice in Wonderland falling down the rabbit hole. At the beginning, she sits in the audience; her sense of wonder draws her to the magical world onstage. She dances, with almost frantic abandon, and plays, almost like a child, with the puppets and miniature set-pieces created by Doug Fitch. Danger lurks: she is chased by a shadowy figure in black – the dancer Abbey Roesner – and dances an amorphous pas de deux with a handsome young man (Ramasar). By the end, she’s alone again. We see a projected image of Mearns’ face, covered in white paint, fingers like icicles (the esthetic is sort of early Bjork). End of part one. Then, after the intermission, during Durey’s Les Neiges, stagehands dress Mearns in a pink, flowery tutu, and she begins to do a few classroom exercises, moving her arms in stiff, classical port de bras. By the time the next ballet begins, she has become the puppet ballerina, the object of Petrushka’s longing. All that, just to become a puppet? Is this what the collaborators of Dancer’s Dream think it means to devote one’s life to dance?

Big themes aside, the interpretation of Baiser has other problems. The story is muddled and the different sections are not distinct enough. The music, much more delicate and fine-grained than Petrushka, requires more attention, and is overwhelmed by the to-ing and fro-ing at the front of the stage. Miniature mountains are moved from here to there, with simultaneous projections overhead; ingenious paper cutouts make an appearance; cartoon images flash across the screen. And then there’s the hectic choreography. Sara Mearns gave her all, but there was little she could in the shallow space allotted but leap and spin – she must have done a million piqué arabesques. At the first intermission, I thought: oh well, it doesn’t work. That was before Petrushka. 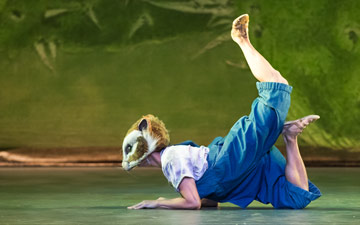