The Bill T. Jones/Arnie Zane Dance Company is celebrating its thirtieth anniversary, and while in San Francisco invited us to the West Coast party.  Jones/Zane presented  /Time:Study 1 , a site-specific adaptation of Study/Time, for the smaller, more intimate space at CounterPulse.  And at Yerba Buena Center of the Arts in the Lam Research Theater,  for the centenary of Nijinsky’s ballet, Le Sacre du Printemps (The Rite of Spring), to Stravinsky’s score, Jones/Zane joined forces with the New York City-based SITI Company to perform A Rite, which is conceived, directed and choreographed by Artistic Director, Bill T. Jones,  SITI Company Artistic Director, Ann Bogart and Jones/Zane Associate Artistic Director, Janet Wong.

CounterPulse has a history of nurturing emerging artists, so to see an internationally acclaimed company here is quite unusual.  /Time: Study 1 is part of a series in which Jones explores his own take on John Cage’s thoughts on indeterminacy and chance.  There is nothing new in linking these ideas to dance as well as music, particularly in light of Merce Cunningham’s use of Cage’s theories for more than sixty years in his own oeuvre.  The dancers are the most astounding part of the hour-long piece (precisely measured by a giant digital clock center stage for half of the time).  They deserve so much more than a list of clichéd adjectives. Powerful movers alighting soundlessly from soaring jumps, kinetic actors translating the idea of a whisper or a scream into a simple gesture  – isn’t that what dance should be, ideally?

Since the beginning of this year there have been many events celebrating the 100th anniversary of the premiere of  Stravinsky’s Le Sacre de Printemps.  Even those who are familiar with the music, some even counting it as one of their favorite 20th century compositions, are not aware that it was commissioned by Diaghilev to accompany Nijinsky’s choreography.

A Rite, in  the hands of Jones, Bogart, and Wong, is the most startling and insightful version I have seen –  ever.  Instead of the score being used as the starting point for the choreography (in essence, just putting steps to the music), here the motivating idea is that both the original choreography and score sparked a riot at its Parisian premiere. What these three created is an exploration of the how and why it occurred, and what impact both the music and choreography had then and how they influenced the development of both arts until now.  In short, it is an amazingly aesthetic lesson in history, culture, philosophy and almost any other topic you can think of, including physics. It weaves a variety of perspectives and artistic voices while grappling with past, present, and future.  A Rite is certainly not the decoration on a cake, but the flour, water, and yeast that make a substantial loaf of bread.

It really isn’t too surprising that the members of the two companies, nine dancers and six actors, should merge so seamlessly.  Bogart’s SITI Company members train in a physically demanding regimen of Suzuki method and Viewpoints, which are every bit as rigorous as the ballet and modern dance training that the Jones/Zane dancers are steeped in.  Both actors and dancers understand that striving towards perfect physical techniques gives them the base and the structure to attain the freedom to discover the emotional voice as well.

All the elements in A Rite are like patches in a quilt, recurring in different places, at different times and with different frequencies, while contributing to the whole larger picture.  The musical structure of the score is elucidated through several means. A woman (Ellen Lauren) in a navy blue middy dress spouts off in her sincere flat-voweled Midwest accent, explaining that Stravinsky didn’t compose the music in the finished order, and that the source of some of the motifs come from Lithuanian and Russian folk songs.  This is all reflected in the structure of A Rite as well.  The score is not played from beginning to end; only portions of it, on recordings by various orchestras, are used at any one time, and not in their usual order.  The performers sing sections of the score in seven-part harmony and also clap the percussive line through other sections.  Versatility by all performers is constantly on display.  The actors have a lot of movement which is so skillfully made that you can’t always tell them from the dancers.

Another important character is the soldier (Will Bond), who represents both the universal and the individual.  Bond manages to move between the external and internal insanity of war, as well as show that even a traumatised fighter can still have remnants of sanity.  At one point he decries people praising his sacrifice for his country and then remains the sole person standing as, ironically, everyone else dies around him.

One particularly evocative scene uses stools as the stepping stones of a moveable path that Akiko Aizawa walks on while reciting a Japanese poem.  The performers move stools Bunraku-style from the rear of the path to the front so she can continue walking in whichever direction they lead her.  In the beginning the stools rest on the floor, then they lift off the ground and rotate sideways  so that her body is parallel to the stage (a bit Trisha Brown-like), then turn upright again, but elevated from the floor to give the illusion that she is walking on clouds.

Strangely the stools are also an element of the weakest scene – and this is first section I would cut if I had any editorial power. They form a straight line across the front of the stage, with actors and dancers perching on them while talking about a gamut of subjects.  Almost everything they are saying has just been communicated by all the preceding action.  Not only is it redundant, but it is also insulting to the audience, who surely have the ability to understand what they’ve just seen and felt, and don’t need explanations that are given with the assumption that they, the viewers, are totally ignorant.

I am not sure how many more performances the two companies will be giving, but A Rite is certainly worth going out of your way to catch.   A Rite @ The Modlin Center, Richmond, VA on Jan 23 – 24, 2014.

[Disclosure: In 1996, four members of Ann Bogart’s SITI company were hired by a San Francisco playwright and director to perform in his own play, in which I had the leading role.   In addition to working with them I also participated in the workshops they taught in Suzuki Method training for actors and Viewpoints.  I am still friends with them, two of whom were in the cast of A Rite.] 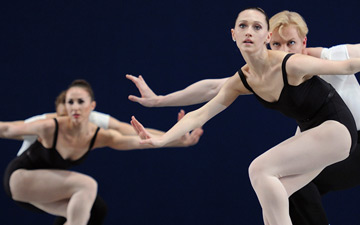