Opening night of New York City Ballet’s spring season wasn’t a gala, but there was a festive buzz in the theatre nonetheless. The ballets were all by living choreographers; the oldest dated from 1988, half were of more recent vintage. And there was a première of sorts, a pièce d’occasion by the French street artist and photographer JR, who created a popular installation for the theatre last season. Les Bosquets turned out to be slight, as one might have imagined, but not offensive or embarrassing. It bore all the signs of being finessed by the man upstairs, Peter Martins, which is for the best. The corps, dressed in attractive black-and-white, dappled unitards, rushed across the stage in battalion-like formations, as if going to war. The piece was inspired by recent riots in the Paris banlieues. The men seemed to represent the rioters – they threw Molotov cocktails – while the women, wearing pointe shoes and arranged in straight lines, were the riot police. If it was a little hard to imagine these well-mannered, fresh-faced dancers as violent desperadoes, well, what did you expect?

Out of their midst emerged a beautiful woman – Lauren Lovette – clutching an imaginary movie camera, and wearing – as one does in such situations – a voluminous white tutu. (I’ve got to say, the tutu, which looked like it had been fashioned out of crumply paper, was extremely nifty. Kudos to Marc Happel, who designed all the costumes.) After a violent skirmish, she collapsed on the floor and remained there, dragging herself laboriously, for quite a while, as the music, by the French electronic composer Woodkid, went from bombastic and percussion-heavy to melodic and sad. Finally, a good soul came to her aid: the marvelous jookin’ master Lil Buck, appearing as a guest artist. (Jookin’, in case you didn’t know, is a highly-sophisticated form of hip-hop that comes from Memphis.) It was a classic case of opposites attract. Here was this kid from the streets, doing magic, sinuous moves in sneakers; she was a pretty girl in a white tutu, bourréeing and spinning like a sylph. As they filmed each other with their imaginary cameras, we saw giant projected images of their sweaty, anguished faces. Sneakers and pointe shoes, a love story.

Yes, there the concept was dated, like an episode of Fame or a scene from Save the Last Dance. As always in these cases, the ballet portion ended up looking stilted and superficial. Lil Buck’s dancing, with its mixture of soulfulness, contorted beauty, and weightlessness, was the real highlight. As he spun on bent legs, hovering on the tips of his shoes, time seemed to bend. Like a ballerina, he can make his arms ripple and undulate in unnatural ways. He seems to glide on a pillow of air. Les Bosquets is worth watching just to see him, but that’s about it.

The first half of the program continued with two pas de deux, by Christopher Wheeldon and William Forsythe, as well as Martins’ ballet/modern-dance fusion Barber Violin Concerto (1988). In the latter, Martins plays around with some of Paul Taylor’s signature moves: the runs, the bat-wing arms, the extreme contrapposto poses and swinging lifts. (The ballet was originally created for two NYCB dancers and two Paul Taylor dancers.) For Wendy Whelan, returning to the stage after hip surgery, there was Wheeldon’s atmospheric This Bitter Earth (part of his Five Movements, Three Repeats, from 2012) full of slides and swoops and intimate moments for the ballerina and her partner (the doting and elegant Tyler Angle). Whelan moved with her usual directness and lack of ornamentation – her dancing is like an extremely honest, uncommonly thoughtful conversation. The reception was very warm.

Herman Schmerman Pas de Deux (1992) by Forsythe, is a bauble. You’ve seen it all before. The casual walking on and off stage, the hyper-twisted, hyper-extended, hyper-off-kilter ballet technique. The clanging, non-music music by Thom Willens. Maria Kowroski’s long, long limbs are particularly well-suited to this ballet of extremes; she was glamorous and poker-faced. Her partner, Amar Ramasar, seemed to find it all quite funny.

Then, came Alexei Ratmansky’s Namouna, A Grand Divertissement, from 2010. I’ve written about this ballet several times, most recently just last season, so I won’t go on about it here, but suffice it to say that this is ballet at its most overflowing, a profusion of ideas and wit, a musical jewel, a dance full of joy and style. At this performance I was particularly affected by a section that resembles a dream, in which a group of nymphs lolls in a wave-like formation on the stage; rolling, rising, spinning, daydreaming. The hero enters and is entranced. He walks down a line of women; one, dressed in white and concealed by the others, shadows his movements. She is his beloved, but he doesn’t know it yet. Later, they will dance a pas de deux both grand and child-like, ending with tumultuous tosses into the air that swoop down into daring fish dives. (Robert Fairchild and Sterling Hyltin went all-out tonight; Hyltin, for all her demureness, can be surprisingly frisky.) The company never looks better than when it dances Namouna. 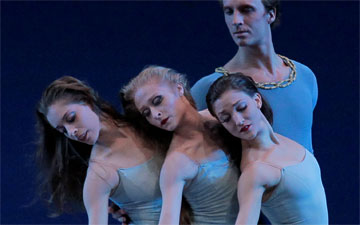