As a dance outreach project, Matthew Bourne’s Lord of the Flies is a rather marvellous thing. In each city that this touring production visits, around 22 young lads from the local community, many with no experience of dance, are selected from workshops and taster sessions to take part in this adaptation of William Golding’s famous ‘boys run wild on an island’ novel. That offers the potential for hundreds to experience dance with professionals – and hopefully have a passion for the art ignited in them.

Those who are chosen, judging by the 22 on the Sadler’s Wells stage, get a rigorous introduction to performance. They acquit themselves extremely well, whether in the opening ensemble piece, moving with drill-like precision to a soundtrack of sweet boys’ choir mixed with martial drumming; or playing exuberantly when they first realise their freedoms in their new ‘home’; or rampaging about in the final stages of their savagery. The movement vocabulary isn’t complicated, Bourne and his choreographer, Scott Ambler, going for a rough-hewn, tumbling naturalism and the odd nod to street dance, but they invest it with enough passion to make it all thoroughly entertaining and far from amateur-feeling.

And yet… what are Bourne and Ambler looking to achieve with this danced adaptation? Are they trying to make the connection with British society’s current fears about young males, exemplified by the reactions to the 2011 riots? There are certainly hoodies on display, notably Danny Reubens’s snarling Jack, trying to wrest control of the tribe from Sam Archer’s sweet-natured Ralph.

But then why abstract the action further by imagining the boys trapped, not on an island but in an abandoned theatre; a world of absolute artifice, with full coat racks acting as thickets to hide in, and scavenged nourishment including packets of crisps and mini ice-cream tubs from the concession stands? (The boys’ sense of a dread presence is rather well captured by a sweeping spotlight fixing on each in turn, though.)

There’s a near constant sense of frantic movement as this large cast surge around Lez Brotherston’s metallic scaffold set – playing, jostling, scrapping – which proves quite tiring in its relentlessness. Scenes tend to blur together into a mass of motion, not helped by a screechily overwhelming score from Terry Davies (short but welcome calmer moments come from Nick Allen’s live cello work). Layton Williams’s frail Simon gets a spookily-drawn dream-sequence solo but Ambler struggles to extract meaning or poignancy from it. In fact, as we hurtle through the plot points, it’s a sense of connection that’s generally lacking here. Even Sam Plant’s put-upon Piggy is hard to warm to as we never seem to spend much time with him before the next whirl of activity.

Golding was offering a warning against complacency in his much-loved book, showing in the simplest terms that peeling off the veneer of civilised society was the work of an instant. But the New Adventures take on his tale doesn’t really instil much sense of unease, beyond discomfort at watching depictions of schoolyard bullying. This is more about rumbustious, high-energy entertainment – no bad thing in itself, but here it feels like a wasted opportunity. 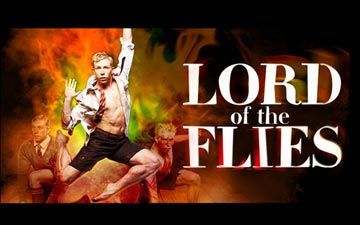 LORD OF THE FLIES – A new show from New Adventures and Re:Bourne