At the risk of sounding like a broken record, is there a ballet choreographer working today who is more imaginative, more wholly himself, than Alexei Ratmansky? The images that music awakens in him are often weirdly unexpected, and yet one is so thoroughly drawn into the worlds he creates onstage that surprise quickly turns into a kind of amazed fascination. The characters – and they are always characters – that fill his ballets are strange, anachronistic, off-kilter and yet somehow familiar. This is in part because they express themselves so clearly through the dancers who embody them. They’re not idealizations, nor are they “just like us,” but they’re human and odd and full of flaws and folly. They’re also funny and often ironic, without curdling into archness. By creating these unique characters for his dancers to inhabit, Ratmansky gives them license to burst out of their shells. This is particularly true with dancers one has barely noticed before.

Ratmansky’s newest piece is called Pictures at an Exhibition and set to Modest Mussorgsky’s eponymous suite, in which the Russian composer created musical portraits inspired by the paintings of his friend, Viktor Hartmann. (The sections have titles like “The Gnome,” “The Old Castle,” and “The Oxcart,” and that’s exactly what they sound like.) It’s not the first ballet to be set to Mussorgsky’s music – Nijinska, Fyodor Lopukhov and John Neumeier have all had a go before him. As a friend reminded me on the way home, there is also the painfully ridiculous version performed by a modern dancer in The Big Lebowski. It’s not surprising that the suite would appeal to choreographers, since each piece has such a strongly-defined character – it almost begs to be interpreted in dance. The walking theme that connects it all is a kind of ideal andante, lilting and grand.

Ratmansky has chosen to use the original piano version, so memorably played by Sviatoslav Richter. (There is a popular Ravel orchestration, but it’s hazy-sounding and, well, a bit too French.) Cameron Grant, principal pianist at New York City Ballet, deserves the highest praise for playing this virtuosic piece with enormous verve and clarity, bringing out both the colors – singing passages, bell sounds, mysterious drones – and the underlying drive of the music. A real tour de force, not just musically, but in relation to Ratmansky’s choreography.

The ballet, for ten dancers, is playful, tongue-in-cheek, but not without its shadows. As the music begins, the curtain rises on a group of figures crouching or standing, perhaps gazing at a painting. Individuals emerge in small bursts. It’s a jolly scene, maybe even a touch too jolly (the over-bright tone will surely soften with time). The designs, inspired by Kandinsky’s “Color Study: Squares with Concentric Circles,” consist of colorful projections (by Wendall K. Harrington) of swirls, squares, lines, and dabs of color. It is appealingly appropriate that Kandinsky’s studies, in turn, were inspired by music; the painter had a condition called synesthesia. He saw sounds as colors. In her flattering costumes Adeline Andre applied details from the projections to silky, short tunics for the women and loose trousers and tops for the men.

As always in Ratmansky work, there are touches of darkness and a suggestion of some kind of transcendence, best represented by an extraordinary pas de deux for Wendy Whelan and Tyler Angle early on. It is set to the wistful minor-key tune “The Old Castle,” and filled with images of flying. Through tricky but understated partnering, aided by Angle’s prodigious skill, Whelan morphs into a bird, perhaps a swallow, diving up and forward through her partner’s arms, gliding through the air, vertiginously spinning. In the duet’s final moments, she balances against his chest, ascending toward the heavens like a ghost. Along with the slow movement of his Concerto DSCH and the mourning duet from Seven Sonatas, this is one of Ratmansky’s most soul-gripping duets, in part because it is about more than just love.

But everyone gets a chance to shine in this ballet. Four women – Whelan, Sara Mearns, Abi Stafford, and the corps-member Gretchen Smith – share a raucous dance near the beginning, sauntering with hands behind their backs, playing tag, creeping and skating on their pointes. They end up in a messy pile, from which Smith untangles them one by one. And speaking of Smith …who ever saw her dance with such confidence and style, and who knew she had such a goofy sense of humor? Until now, she has been a reliable member of the corps; this ballet reveals that she is much more. After this romp, Gonzalo García dances a haunting solo, set to a transposition of Mussorgsky’s promenade theme for the upper register of the piano. His dance is full of ruminative, droopily elastic steps and beaten jumps that hover for a moment before sinking into deep, melting pliés. He’s a melancholy Pierrot; but soon he’s joined by the other men for a folk dance; they tap their toes, jump in place, clap their thighs and thump their feet in percussive patterns. The pack is led by Amar Ramasar, who later has an explosive solo of his own, followed by a blazing pas de deux with Sara Mearns in which one fears for both their safety.

As the work progresses, the dancers’ world expands. There they all are in “Catacombs,” busily going about their business: three couples dance, two women watch, two men (Angle and Gordon) engage in an insouciant choreographic conversation. Then, one of them is carried off, leaving the other bereft. Wendy Whelan touches the floor and plucks a flower. Could it be a quotation from Jerome Robbins’ Dances at a Gathering, or from Ratmansky’s own Russian Seasons? Maybe both? Perhaps it’s just a gift to Whelan, who retires at the end of the season. The final section is ceremonious, processional, like the wedding in Firebird. Men and women file past each other, bow deeply. In many ways, this is a very Russian work (the folk-dancing, the transcendence). In the ballet’s closing moments the women kick their legs – as they are held aloft, upside down – ringing the air like bells.

Pictures at an Exhibition came at the end of a program that included Peter Martins’ Morgen – a series of acrobatic duets set to Strauss songs – , the Christopher Wheeldon pas de deux This Bitter Earth – soulfully danced by Whelan and Angle – , Troy Schumacher’s Clearing Dawn, Liam Scarlett’s bodice-ripping duet Funérailles, and Justin Peck’s enigmatic Belles Lettres. It’s a long evening, too long, but once Pictures begins, it scarcely matters. If only every ballet felt this vital and alive. 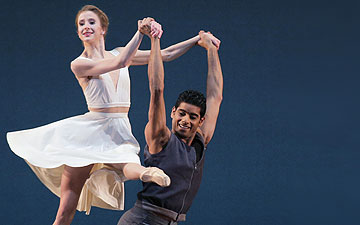