It’s a good thing indeed when a visit to the ballet turns out to be a night full of surprises, all of them good. First of all, let us praise the heavens for the return of mixed bills combining the works of several choreographers, accompanied by the music of different composers. At New York City Ballet we’ve had the Stravinsky Festival (last season) and more recently the Tchaikovsky celebration (this season). In both cases, too much of a good thing. This week the company has reverted to something we had almost forgotten: glorious mix-and-match combinations with music by Philip Glass, Sufjan Stevens, Johann Strauss, Shostakovich and others. If only NYCB’s orchestra, which is going through a rough patch, were playing better.

But no matter. On this night it was hard not to come out of the theatre with renewed faith in the vitality of ballet’s youngest generation of choreographers, as well as respect for the surprising range of Balanchine. To start things off there was a new ballet, Paz de la Jolla, by the recently discovered in-house talent, Justin Peck (a member of the corps), whose first work the company performed just last summer. Then a dusted-off rarity by Balanchine, Variations Pour une Porte et un Soupir, a kind of surrealist experiment set to musique concrête by Pierre Henry. And, to top things off, one of the most exhilarating ballets of recent years, Alexei Ratmansky’s Concerto DSCH.

With Paz de la Jolla Peck demonstrates that he’s no mere flash in the pan. Last season’s Year of the Rabbit, which also returned to the stage earlier this week, is fresh, overflowing with ideas, breathless, complicated. But Paz de la Jolla reveals an even rarer quality: the ability to make a ballet on command, quickly, and to make something significant out of it. The commission was a last-minute stop-gap for another ballet (by Peter Martins) that had to be postponed because of a delay in the composition of the score. Peck rather bravely took the leap. Yes, he had a piece of music in mind, an exuberant work for piano and chamber orchestra by Martinu, Sinfonietta La Jolla, inspired by the Southern California coastline. It just so happens that Peck is from the area. Syncopated and free-wheeling, the sinfonietta reveals more than a whiff of Aaron Copland. Like Jerome Robbins’ In G Major, a likely inspiration for Peck, it’s a seaside ballet, a summer romp. (The attractive costumes, by Reid Bartelme and Harriet Jung, consist of beachy shorts and stylish 1940’s-style bathing suits, some with bare midriffs.) But Peck goes further than Robbins, turning the usual romantic pas de deux (set to the symphony’s slow central movement) into something rather more original – an aquatic dream sequence. Again, one sees likely antecedents, including Ratmansky’s Namouna, a fantasy ballet with a nautical theme, made for City Ballet in 2010. But what is so heartening about Peck’s dream ballet is that it reveals this young choreographer’s ability to go beyond making interesting (and complicated) combinations of steps and actually hint at an underlying story, and not just the usual boy-meets-girl story.

And how well he does it! After a playful, tender pas de deux, the lovers – danced with delicacy and bloom by Sterling Hyltin partnered by Amar Ramasar – settle down to gaze at the sea in the moonlight. (The scene is suffused with lovely silvery lighting, by Mark Stanley.) The waves, embodied by a small ensemble in shimmering, flowing tunics, crash forward and recede, pool and ripple. As in Year of the Rabbit, Peck reveals a rich imagination for group movement. Here he organizes the daners into a complex organism with moving parts and various layers. Their legs become the surf; their intertwined arms and rolling heads are eddies and pools. Then, something even more intruiguing happens. The man falls asleep, but the woman does not. The waves call out to her. She wades into the surf, and little circles – trios of dancers – eddy around her. Like the snowflakes in Ratmansky’s Nutcracker, the waves are sirens, drawing their prey dangerously deeper, perhaps to her death. Hyltin is both attracted and afraid. She escapes once, twice, but finally gives in to the lure of the sea. To her (and our) surprise, instead of being pulled under, she becomes a kind of ondine, partnered by the waves. It’s magical. Her lover awakes and dives in to save her. The two end on their backs, in each other’s arms, concealed by the corps. One wonders if they’ve drowned. As the exuberant, sunny third movement begins, the waves recede and the beach-lovers run on, frolicking in the morning sun. The two lovers lie perfectly still. Finally someone notices, shakes them. Nothing. It’s only when the others have given up hope that the two awake and join in the fun for a rollicking finale.

The ballet reveals many qualities: The finely-sketched contours of a story. The sophisticated movement for the corps, used as one but also subdivided in intriguing ways. Add to this a virtuoso part for Tiler Peck, full of swirling movement, turns, leaps, bends in every direction, even a series of spins à la seconde because, well, why not? No doubt about it, Paz de la Jolla is an immensely pleasing and satisfying ballet. Better yet, it offers much promise for the future. Let’s hope that Justin Peck, who performed later in the night in Concerto DSCH, will be encouraged to stay with the company and make more ballets for these dancers whom he knows so well, and who understand just what he wants from them. He’s dancing well, too. It would be good for everyone: the company, Peck, the audience.

Variations Pour une Porte et un Soupir, last performed in 2004, is a Balanchine rarity, a concept ballet created in 1974 for Karin von Aroldingen and John Clifford. Acrobatic and heavily dependent on mood and special effects, it’s not the sort of thing one tends to identify with Balanchine. But it’s not without precedent; Balanchine himself pointed out that he had done something very similar in Errante (1933), and the acrobaticism and expressionism of Prodigal Son are not far off. The music consists of a recorded score of creaking sounds (for the door) and gong and kettle noises (for the sigh), with no meter or clear structure. The dancers must simply memorize the intervals between the pops and groans and synchronize their movements perfectly to them. The male Sigh – Daniel Ulbricht – droops, slithers, and contorts his body into grotesque shapes. The female Door – danced here by Maria Kowroski – bends, twists, squats, jabs. Each character is illuminated in turn; it’s not till the end that the Sigh makes some attempt to mingle with the Door. The part is perfect for Kowroski; her impossibly long, lithe, limber body is simply astonishing in its ability to create angles and shapes that are so extreme they don’t seem quite human. If she hadn’t become a dancer she could have been a contortionist. At one point she folds in half, walking on all fours while on pointe and with her legs perfectly straight; it’s one of the weirdest-looking forms of locomotion I’ve ever seen. Throughout all this, Kowroski maintains a perfectly neutral expression, framed by a delicious little Louise Brooks bob. Ulbricht, as the sexless Sigh (covered in white powder) tends to go for laughs, which doesn’t feel quite right. On the other hand, he does a backbend that makes your skin crawl. The whole thing, including the Door’s giant billowing cape, pulled by hidden strings at four corners of the stage so that it rises and falls like a shimmering spider-web (or like a monstrous version of the Siren’s velvet cape in Prodigal) is quite creepy and strange. In the end, the Sigh leaps toward the Door and she crawls over him, her cape swallowing him up in one gulp, and that’s the end of it. I’m glad to have seen it, though it does go on for just a bit too long.

It’s always good to see Concerto DSCH. Back in 2008 when Ratmansky originally made it, the company took to it like a duck to water, and still dances it with a kind of crazy joy. Seeing it on the same program with Paz de la Jolla it becomes even more clear how much Peck has learned from its exuberant style, its sportiness, the clever way it handles the dynamics between dancers. DSCH is also one of the best places to see Ashley Bouder, a ballet where she can really show off her spectacular attack without seeming over-the-top. (Tonight, her partners in crime were Joaquín de Luz, who knocked off endless spinning jumps with great panache, as always, and Troy Schumacher, thrown in at the very last moment to replace Sean Suozzi. Talk about sink or swim.) It’s a satisfying ballet in so many ways. The steps fit the music so well, both in timing and in spirit, it’s almost as if they had been born at the same moment. It has wit: the way Ratmansky uses repetition and variations of speed for comic effect is exhilarating. It has a style: a kind of tongue-in-cheek heroism straight out of Socialist Realist art. It has layers of meaning: interactions and hidden dramas that reward repeated viewings. And it contains what to my eye is still Ratmansky’s most beautiful, dreamlike pas de deux, infused with a floating quality that is probably a legacy of its first interpreter, Wendy Whelan. On this night Janie Taylor suffused it with an almost frightening ardor. Her partner was the always-gallant Tyler Angle, who seemed to love her blindly, only to flirt with Ashley Bouder just moments later.

On nights like this, there’s no better place to be than at the ballet. 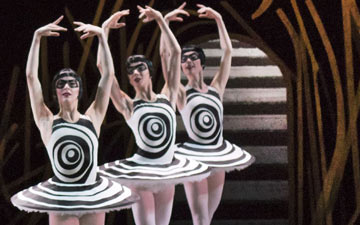