Fall For Dance is a genuine feast, a display of unparalleled variety and plenty. When well-balanced, nothing is sweeter, but occasionally the flavors clash, and the abundance overwhelms.

Programs 3 and 4 were particularly long this year, and might give the programmers pause. Half of the eight works were produced within the last five years, the other half were contemporary standards or in the case of Paul Taylor’s Brandenburgs, a defining work.

Brandenburgs may not have the revolutionary reputation of Esplanade (nor see dancers hurtle their bodies to Bach with wild abandon), but it is no less gleeful.

Taylor is a big Bach fan, and in Brandenburgs he embodies the composer’s complexity and logic without being stale or pretentious. Dancers beam Bach from their breasts, making you believe there are no other steps that could possibly be done to this music. Michael Trusnovec – a doppelgänger for a young Sting – in his “Apollo” role, walks as if the sun shines out of his behind, and you believe it. You buy it lock stock and barrel, every step the logical conclusion of the one that came before it. The phrasing is superb; velocity and momentum are used with aplomb, that is to say, not overused. Taylor’s jazzy half-hitch kicks, whether in coupé or passé, still look crisp, fresh and playful, and somehow not at all out of tune with the work’s sculptural classicism. The three “muses” – performed Wednesday night by Michelle Fleet, Parisa Khobdeh and Eran Bugge – smile, lift up their arms, and offer up Bach as a gift. Taylor’s influence on Mark Morris, while so obvious in Esplanade, is just as apparent here, in Brandenbergs’ Hellenic romance and flirtations with naturalism.

Even today, Esplanade is still a headbanger, tapping into the savage mania music arouses within us, while Brandenburgs is ebullient yet calm, radiating the sublime contentedness music can bring.

Hans van Manen’s Solo, performed by San Francisco Ballet, was the other “older” work which continues to hold its own. Starring Gennadi Nedvigin, Joseph Walsh and Hansuke Yamamoto, Solo has long been a fantastic vehicle for SFB’s men, whose strength and character are trademark qualities of the troupe.

Nedvigin is the witty show-off and trio leader, though Walsh gives him a run for his money. A former principal at Houston Ballet, Walsh came on board at SFB in 2014 as a soloist, but was made a principal by the end of the year. Walsh relished van Manen’s dizzying spins and swivels, teetering at full tilt, his mop of hair spiraling into space, risking it all – and what fun that is.

Stanton Welch’s Maninyas was Houston Ballet’s offering this year. Created on San Francisco Ballet in 1996, Maninyas is, according to Welch, about the “unveiling” of oneself within relationships, the gradual reveal. Sex is evident, from the derriere-twitching to deep, earthy, Graham-esque squats. While there are brief moments of playfulness, Maninyas’ relationships, particularly in two pas de deuxs, appear coercive rather than of a mutual unfolding of any kind – the women grappled by their men, repeatedly locked into positions and struggling to writhe away. At the end of the central movement, the women are lifted up by their partners in a cruel backbend, the women’s bodies arching so far back the audience can only see them from the pelvis down, left to meditate on a decapitated vision.

Dorrance Dance is a welcome addition to the tap world. Headed by the acclaimed, youthful Michelle Dorrance, the troupe is less than five years old and Myelination – a work for 12 tappers with nine musicians and singers – is a Fall for Dance 2015 commission.

The work opens minimally, three dancers overlapping their legs and tapping playfully with vaudevillian humor. But the rest is baroque, maximalist. Dorrance has assembled the most accomplished tappers, and it shows in their virtuosity. Sometimes it shows so much that the music can’t be heard, and the flurry of activity happens without relationship to the music, without a communal rhythm or a rhythm within rhythm. Dorrance’s staging and choreography are atypical for the tap world, bringing in elements of contemporary dance and partnering. As a whole, Myelination is overly busy but shows Dorrance’s promise and vision.

Stephen Petronio’s Locomotor debuted only last year, and does what it says on the tin. Bodies run forwards and backwards, and dance backwards in a relentless continuum of movement. Arms and legs have a trunk-like quality, swinging up and down with the heavy weight of a caber. The partnering choreography is meaty and muscly, particularly for the men. The music, a mash-up of post-rock and ambient glitch by Clams Casino, seems to ask for sharper, more angular movement, but maybe that just shows a convention of expectations Petronio is trying to usurp.

Hailing from Brazil, Companhia Urbana de Danca performed Eu Danço – 8 Solos no Geral, a long, wandering work of contemporary Brazilian urban dance. Their capacity as dancers is astounding, but the score lacked dynamism, and despite the talent onstage it was hard to get excited. Jessica Nascimento’s musicality and powerful presence was the highlight.

Fang-Yi Sheu and Herman Cornejo performed Pheromones. Choreographed by Sheu and set to Philip Glass’s Facades from Glassworks, the two sniff each other out before commencing a more hands-on pas de deux. No one would complain about a shirtless Cornejo in a steamy duet, but Pheremones seems too conventional for both of these artists.

Bijayini Satpathy and Surupa Sen performed Shivashtakam (An Ode to Shiva), a captivating work inspired by a ninth century Sanskrit poem about Shiva. Satpathy and Sen run Nrityagram, an Odissi dance commune outside Bangalore, India. Accompanied by a classical Indian quartet, Satpathy and Sen looked like statues come alive, making audiences gasp in awe of their backbends and grace. 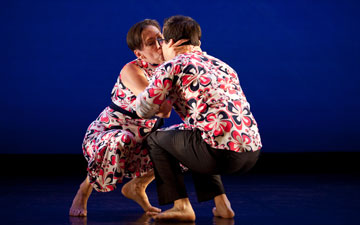