Available Light may well have been mind-blowing for Los Angelenos in 1983, when contemporary art was blipping onto the edge of the local radar. The city’s nascent Museum of Contemporary Art commissioned the performance piece, bringing together Judson Dance Theater alumna Lucinda Childs, pop-architecture darling Frank O. Gehry and minimalist-classical composer John Adams. The three artists had never met before, and the museum (now the Geffen Contemporary at MOCA) took a gamble on their large-scale experiment.

The result was a 53-minute Gesamtkunstwerk, presented in a reclaimed warehouse adjacent to MOCA’s temporary downtown location. Minimalist in every dimension, it combined Childs’ stripped-down choreography, Gehry’s bi-level stage and Adams’ electronic tone-based score, titled Light Over Water. The audience sat on two sides of the performance, immersed in the evocative atmosphere of the industrial space. Available Light was soon restaged for the proscenium and brought to Brooklyn Academy of Music in New York, then disappeared.

Cal Performances’ is among many co-commissioners for the current revival tour of the proscenium version of Available Light, which opened at Zellerbach Hall on Friday 3 February. Cal Performances’ took part in honor of San Francisco resident Adams, who celebrates his 70th birthday later this month; he and Childs were present for the celebratory performance.

In reflecting on the work, Childs has said that “no one had ever seen anything like it” at the time. That’s arguable at best, given that Merce Cunningham, Paul Taylor, Yvonne Rainer, Martha Graham, Pina Bausch and many other innovators, including Childs herself, had already left long trails. Perhaps the conventional, moneyed Los Angeles art world had never seen anything like it, as the trend for contemporary art had finally entered the mainstream. But in the dance world, and on the fringes of West Coast art and performance, Available Light – named for Gehry’s lighting scheme for the warehouse space – would have been more interesting than shocking.

That said, the work is merciless, and in the best way. The steps are excruciatingly simple: fleet jetés, hop steps and stag leaps, soutenu turns at precise degrees, attitudes and fouetté jumps. Torsos are rigid, faces expressionless and arms mostly à la seconde, sometimes in first or third position, creating a robotic, metronomic energy that echoes the uncountable sound score. (Adams added pulses later, to give the dancers something to cling to.)

For while the steps are minimal, the structure of “Available Light” borders on maniacal. By twos, threes, fours, sevens, the dancers execute the phrases with mathematical precision and bracing clarity. Any two dancers might make a quarter turn together, then pause while three others hop-skip-leap. Pairs and trios chassé toward and past each other; that no one crashed into each other attests to Childs’ flawless composition and the dancers’ tremendous command of focus. On the upper tier of Gehry’s split-level stage, two dancers paralleled or reversed the movement taking place below. The dancers were musical as well as mechanical, somehow reaching a single plane of hypnotic, rhythmical evenness across a range of body types from tall to short, muscular to petite.

Combined with heavy application of imagination, Gehry’s chain-link backdrop, and the removal of cycs and wings almost evoke the raw original space. Unfortunately, the redesigned costumes seemed like a concession to current taste; changed from loose, side-split pants by Dutch-American couturier Ronaldus Shamask to barely-there toga-sashed swimsuits by costume designer Kasia Walicka Maimone, they shift the focus from austerity to allure.

Thirty-five years later, the obsessive precision of the choreography is still a test of one’s fascination for process qua process; the work is still purifying in its relentless discipline. But the ideas in Available Light have informed modern and postmodern dance before and since its debut. It is more interesting today as an embodiment of Adams’ score, making its inscrutable blips, beeps and brass overlays visible to fans of his music. There were many in the house that night. 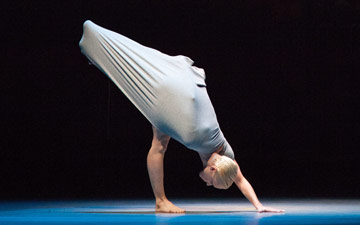 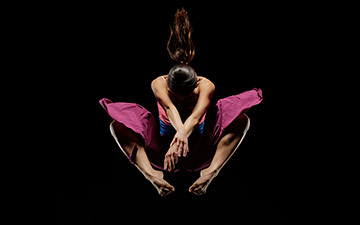